Russian
To the Chief of the Northern Expedition
comrade A. M. Sulman
from Ch. Mechanics V. S. Titov

Total time in air is 5 hours. 45 min. Searches were made in the area of Otorten, along the river Auspiya and Purma. Also, the area beyond the Ural ridge in the upper reaches of the river was scanned. We searched in the area of the 2nd Northern and the Toshemka river.

On Auspiya river were found ski tracks that went along the river, then along the North bank of the river - in the direction of the ridge. The tracks / skies / is old in many places are covered with snow.

On Purma river was discovered a ski trail crossing the river.

The ski tracks on Auspiya river match the route of the group of skiers. 25.II. this year on an AN-2 plane took off with a group of UPI personnel, marched along the eastern slope of the range of the Ural mountains to the river Purma and Auspiya.

A rescue team of 11 skiers arrived at Auspiya river with instructions (in a canister) for the direction of further searches.

The rescuers descended from Mt. Otorten to Auspiya river.

Our Mansi group via portable radios was instructed to go to Auspiya, connect with the rescue team and solve the issue of further searches based on the specific results of the tracks found on the Auspiya River. 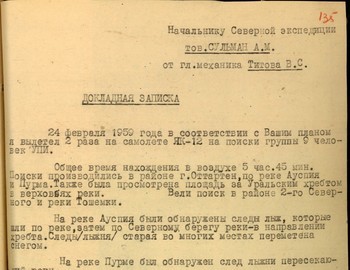