When in May the snow started melting a Mansi native Kurikov with his dog noticed some cut branches that were forming sort of trail which they followed and 50 m from the cedar they found black cotton sweat pants, the right leg cut off with a knife. Cedar branches, a young fir tree was missing its top, another piece of clothing was found - the left half of the women's light-brown wool sweater, right half and sleeves cut off. Sweater was presumed to belong to Lyudmila Dubinina. 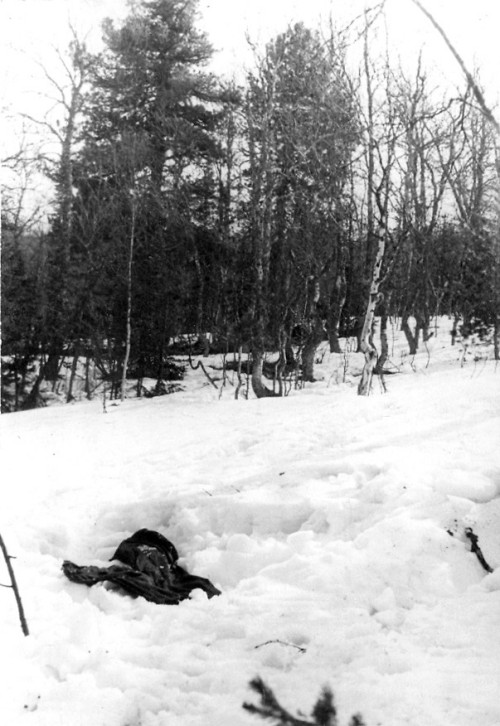 15 m up the bank from the stream, they found half of a beige sweater and the other half of the ski trousers.

The area was previously searched with avalanche probes but the snow then was deeper than expected. Vladimir Askinadzi and Boris Suvorov, both UPI students, were key players in the rescue team. Kurikov followed some small fir tree branches in the snow till 50 m down from the cedar they led into the snowdrift. Rescuers began to dig and at a depth of 3.5 m they found cut branches covered with clothes. The bed of branches consisted of 14 fir tree branches and one birch, and on top were belongings and clothes. 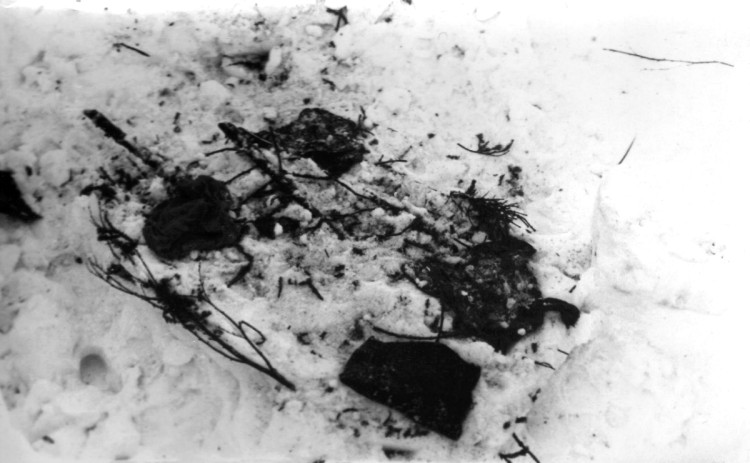 The clothes on a bed of cut branches made 4 seats

15 m from the den, they found a spoon and a knife sheath. Official criminal investigation, Decision to dismiss criminal case:

Here is a very strange fact – knife was never found in the area, only a knife sheath. Lead investigator Lev Ivanov could not have mistaken a sheath for a knife. The branches were cut with tool, that could not be misinterpreted, but the absence of this tool could not be explained without having somebody taken the knife from the crime scene, and that meant that the case could be closed as a “calamity or overwhelming force”. 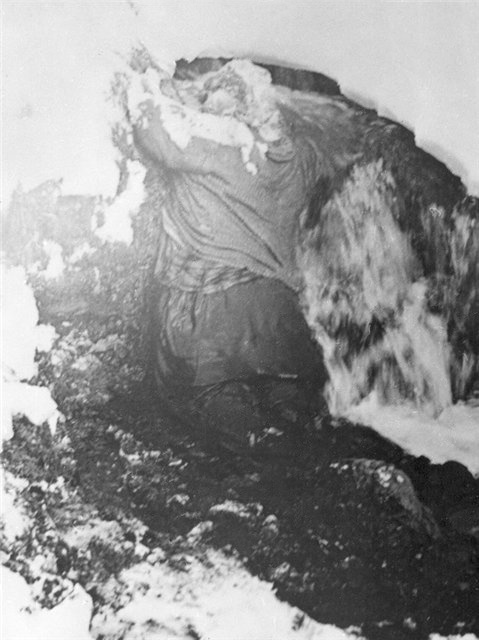 20 m from the den, a probe 4 m deep came out with a fragment of flesh. They started to dig. Dubinina's body was found in the ravine on may 5th, 1959. From the official record of the discovery of the bodies:

“On the northwest slope of Hill 880, about 50m from the cedar, in the stream, we have discovered four bodies: three men and one woman. The body of the woman has been identified as Lyudmila Dubinina. The bodies of the men cannot be identified without removing them from the water. They are buried in snow 2.5 m deep. The men are lying with their heads facing north and downstream, and the body of the woman is lying facing upstream. She is dressed in a small skullcap and a yellow sleeveless shirt. Then a flannel shirt; two sweaters, one gray the other dark; and on her legs are leggings and brown ski trousers. On one foot are two woolen socks and, on her right foot is bound half of a beige sweater. On the back of her head and on her back there are traces of damage from our probe. Her body is decaying.

The first man is dressed in a khaki-colored windbreaker, and on his wrist he has two watches, one a Pobeda and the other a Sportif. The Pobeda had stopped at 8:38, and the Sportif showed 8:15. It is not possible to see the head and legs of this body, because he is not completely exposed. The other two bodies lie in a kind of hug, both with nothing on their heads, and some their hair missing. They are both dressed in windbreakers, but it is hard to say what else, and it will have to wait until we get them out of the stream. The bodies are decaying and we have photographed them. They need to be taken out of the stream immediately because they are decaying fast and will soon be lost in the stream, which is very fast.”

It was Vladimir Askinadzi’s probe that damaged Dubinina’s neck. In 2013 Askinadzi published a letter in Ural Pathfinder magazine, in which he recalls that the distance between all the heads of those found in the brook was about 30 cm (about 11.5 “) – they were all very close to each other. 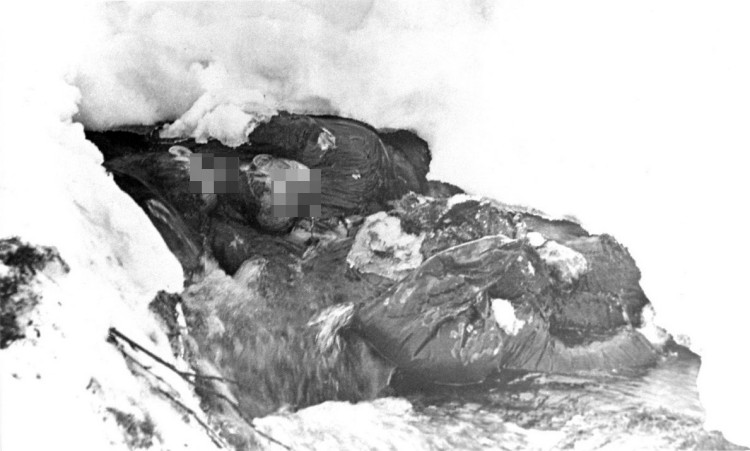 Kolevatov's body (upper left) was found right next to Zolotaryov's as if the latter was carrying or protecting him. Tibo's body was positioned 30 cm lower downstream.

Vladimir Askinadzi recalls that Colonel Ortyukov grabbed the notepad, looked at it, cursed and said: "He’s written nothing." He seems to be the only one that has seen the notepad. The whereabouts of this notepad is unknown, it was never filed in evidence or seen by anyone else. On the other hand we hear only from Askinadzi about the whole episode with the pen, notepad and Colonel Ortyukov, and that 59 years after the fact in a recent letter of Askinadzi to Ural Pathfinder magazine.

Georgiy Ortyukov, the Army Colonel in charge of logistics and helicopter support, was the only one who saw the notebook in Zolotaryov’s hand. Vladimir Askinadzi recalls that it was hard to identify the bodies as they found them, and it was Colonel Ortyukov who was ordaining who was who. ‘We were surprised,’ Askinadzi said, ‘because it was really hard to see, and no one could object or disagree.’

Askinadzi also mentioned that while he was present during that period, he felt very strongly that those in charge were not really interested in a proper investigation. He remembers that the lead investigator Lev Ivanov ‘did not even approach the pad of branches, didn’t take pictures, it seemed they already had a theory’. Askinadzi extends this accusation to Ortyukov, who was in charge of the whole rescue operation. He wrote: ‘If it was really so important to get this right, why didn’t they call for Yuri Yudin? He was the only one that knew them all, and could say for sure. I only knew Zina.’

The whole search operation was rushed. This pressure was from someone above – from Moscow, Sverdlovsk, or Ivdel. The atmosphere was very tense. Everyone was anxious for answers and awaiting for news.

Ortyukov and some soldiers took all the bodies from the stream, carried them up the bank and placed them on special stretchers to drag them across the snow, then took them up to the pass to the helipad. It was hard work, and they repeated the same process four times. A helicopter met them on the pass, but the pilots refused to take the bodies onboard, complaining this was outside their official duties. It has been said that the pilots knew the bodies were poisoned with radiation and, for this reason, didn’t want them in the aircraft. Ortyukov sent the following radiogram:

This is a scandal! I and fourteen other people brought these bodies on our shoulders and they refused to take the bodies in spite of me insisting. As a Communist I am outraged by the behavior of the crew and ask you to inform the Communist Party leader about it. And I have to mention to you for clarity, these bodies are frozen.

We packed them for transportation and there was no reason to refuse to take them. The medical expert refused to examine or to cut the bodies here on site. It is absolutely not dangerous from the point of hygiene. They are folded and covered in special impervious material. The crew said they would not transport them until they are in Zinc coffins.

At this point Colonel Ortyukov reached the limits of his desperation. He took out his pistol and threatened the crew. Vladimir Askinadzi intervened, after which the medical expert reorganized how the bodies should be packed for transportation, and they were finally airlifted for transportation to Ivdel.

Autopsy reports of the hikers found in the Den » 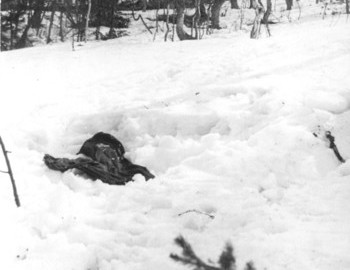 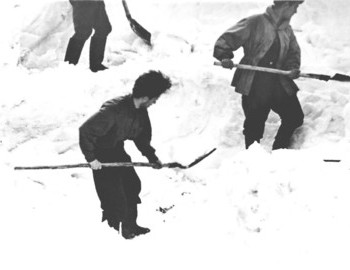 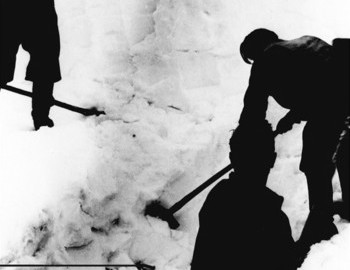 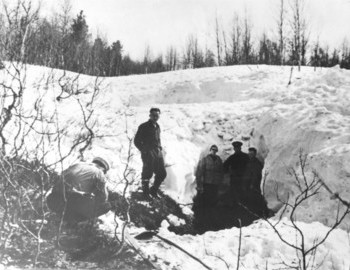 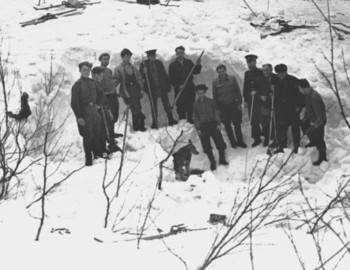 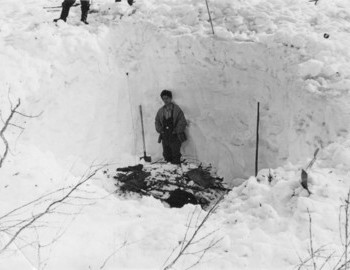 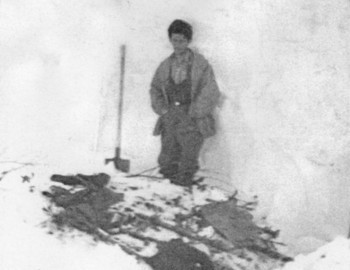 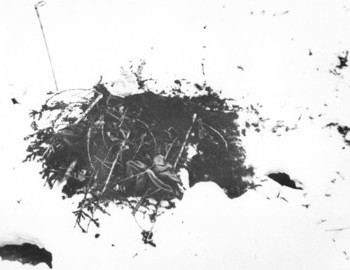 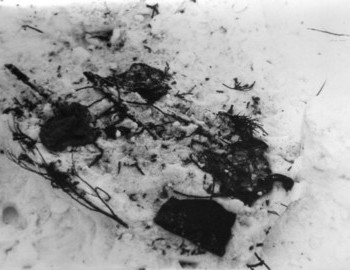 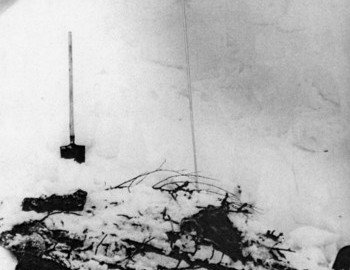 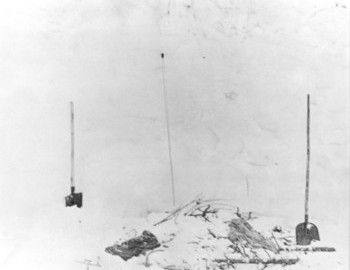 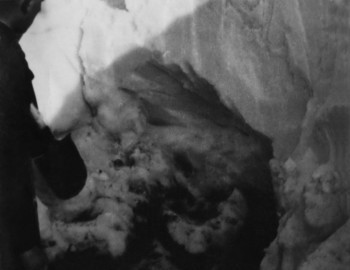 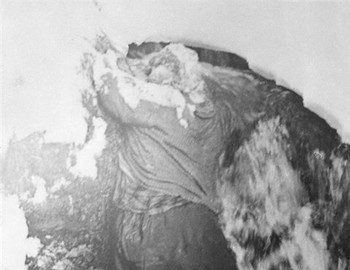 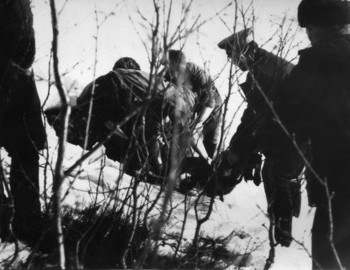 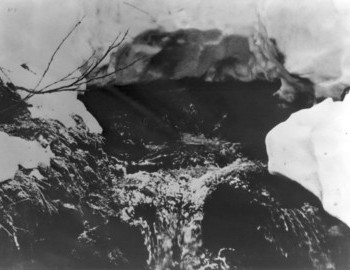 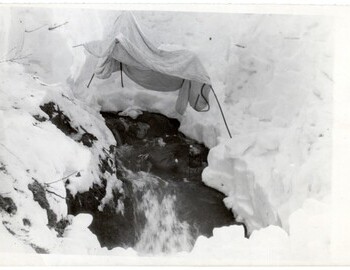 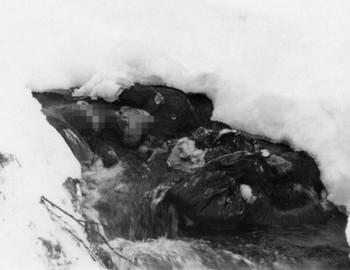 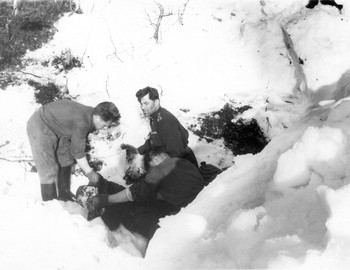 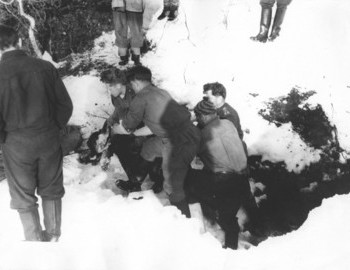 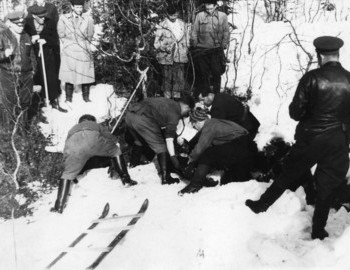 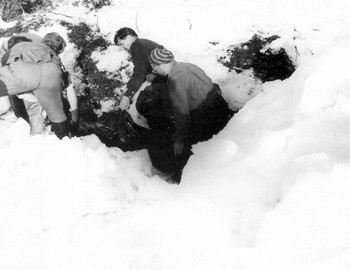 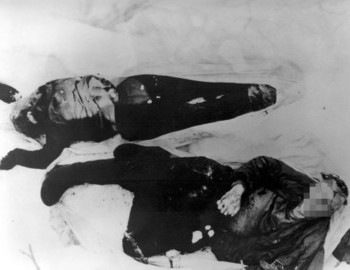 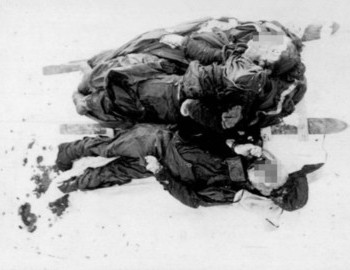 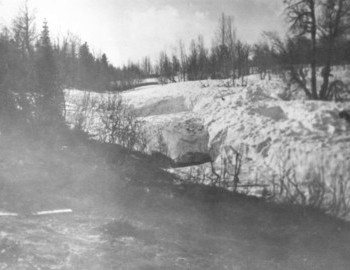 At the bottom of the excavated site, there was found a den from the tops of a cut spruce trees on an area of 3 square meters over the branches in a pile to the left were found a sleeveless gray woolen sweater made in China insulated knitted trousers with a brown fleece on the left side the top and bottom elastic bands of the trousers are torn, warm brown wool sweater with lilac thread, the right pant leg from the previously found trousers, one soldier's puttee from an ordinary military material with sewn brown galloon about a meter long, I can't explain the presence of the puttee stop

During excavation, items were found at a depth of 2 m 30 cm from the top of the snow cover and 30 cm above the ground stop
In place of dyatlov group tent is found the sheath from a dagger 18 cm long made of PCB and one spoon the sheath assumed to belong to kolevatov stop

To Prodanov Sulman
5/5 at 9 h 30 minutes with Kurikov 50 meters southwest of the cedar in the place of a chopped spruce grove at a depth of 10 cm were found black cotton sports trousers without a right leg from the back of the burned right trouser leg cut off with a knife stop also found the left half of the female light brown worsted wool sweater second half with a right sleeve cut off with a knife is not yet found. Sweater belongs to Dubinina stop at 11 AM was decided to excavate a trench to the southwest from the cut spruce forest in 10 m excavated portion in area of 20 m2 to a depth of 2.5 m stop

Sverdlovsk Regional Committee of the Communist Party of ermash Oblast Executive Committee Pavlov
The Ivdel City Committee of the Communist Party to Prodanov
the commander of the helicopter, captain Gatezhenko ... refused to evacuate the dead citing his refusal by an order from comrade who had prohibited to evacuate without zinc boxes stop according to the regional expert. ... completely safe stop The corpses are wrapped up and sewn into tarpaulin waterproof covers stop eliminating contamination of the point I ask you to demand instructions from the air force command immediate evacuation of corpses brought to the area of the helicopter landing pad stop solution please inform
Ortyukov 7/5

To Prodanov
I'm asking to hand over the corpses to Klinov for this reason. A detailed inspection can not be done stop The corpses are well prepared for dispatch. Ivdel is lined with spruce stop If tomorrow does not take out, then it decomposes stop If the burial is done at the height, it will not be possible to make an autopsy because of lack of basic conditions stop The revived Ivdel sent the corpses waiting for traces of violence clothes made by the tourists themselves remain a camp for the search for small items
Ivanov

The usual confusion with the dates in the case files

Protocol of inspection of the scene where the bodies were found is made on May 6th. Prosecutor Tempalov arrived the next day and dated his report. Link to the case files → 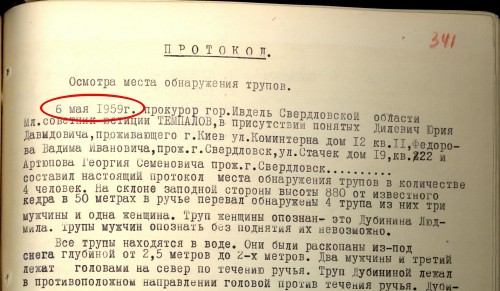 Resolution to close the case says the last 4 bodies were found on May 4th. Too many discrepancies in this document...
Link to the case files →