On April 7, 1959, the prosecutor of the Prosecutor's Office of the city of Ivdel in the Sverdlovsk Region, Jr Counselor of Justice Tempalov interrogated in the office as a witness, in compliance with Article 162-168 of the Code of Criminal Procedure of the RSFSR

On February 17, 1959, at 6 o'clock (illegible) minutes of the morning, I was on duty.
At this time, from the south side, appeared a ball of large sizes, enveloped in white fog. The big circle. When moving across the sky, the ball then increased, then decreased its brightness. With a decrease, the ball hid in a white fog and only a luminous dot could be seen through this fog. Periodically the luminous point increased its brightness, increasing also in size. With increasing brightness, the luminous point, which took the form of a sphere, it seemed to push the fog (unintelligible), while at the same time increasing its density along the edges, and then hiding itself in the fog. The impression was created that the ball itself radiated this (inaudible) fog, which formed the shape of a circle around (inaudible). The ball moved very slowly and at high altitude. This ball was visible for ten minutes, and then disappeared in the north, as if melted away. That's all I saw. 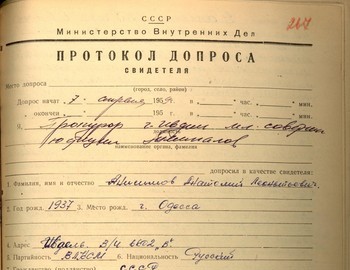 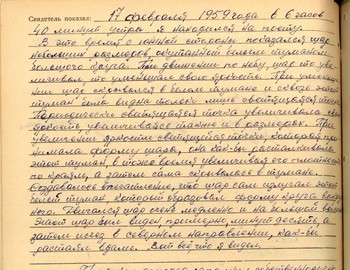