Witness testified: On February 24, 1959 I received an order to go to the city of Ivdel to organize the search for a group of hikers.
On the same day I was admitted by the District Air Force Commander with whom an agreement was reached to allocate one aircraft and two helicopters for the search opeartion.
At 11 AM on February 24 we, together with the Deputy Director of the UPI comrade Pletnev N. F. and secretary of the party organization comrade Zaostrovsky F. P. and with a group of sportsmen students under the guidance of master of sports engineer E. N. Maslennikov 12 people total flew to city of Ivdel.

Arriving in the city of Ivdel on the same day and convening a meeting chaired by First Secretary of the CPSU CC Comrade I. S. Prodanov. The meeting was attended by the Head of the Department of Ivdelgag, comrade Ivanov, Head of the Northern Expedition comrade Sulman, Head of the squad of the Sverdlovsk GVF, Prosecutor of the Ivdel district V. I. Tempalov. They made a decision was made to drop the landing parties for the whole route of the expedition of Dyatlov group.
At the meeting it was said that the searches on the site from Second North up along Lozva river began by a group led by Slobodin* with the participation of the Mansi Stepan Kurikov on February 20. The group was assigned the task of moving along the route of Dyatlov group from the Second Northern up along Lozva river to Mt. Otorten.

Based on the decision I formed three landing groups from the number of students and servicemen of Ivdellag and in the period of February 25-26 were dropped the first group in the area Mt. Otorten, the second group - on Mt. Gumpkopay, the third group - on Mt. Oyko-Chakur and the fourth group - along the valley of Vizhay river.

The landing was completed on 26 February. In total, 46 experienced sportsmen in three airborn groups and two groups by land were sent to Lozva and Vizhay rivers with specific task before each group. The plan was to cover Dyatlov group route and survey of the upper sources of Sulpa, Lozva, Auspiya, Purma, Ushma, Malaya Toshemka, Bolshaya Toshemka and Vizhay rivers. And also the upper sources of the rivers of the western slope of the Ural Ridge with radial approaches along the upper sources of the rivers for a distance of 10-15 km from the watershed part of the ridge in order to survey these rivers and find Dyatlov group along their route.

At 6 pm on February 26, while on the radio station of the Northern Expedition we received from Slobtsov group,

searching in the upper sources of Lozva river near height 1079, a radiogram in which it was reported that on the eastern slope of the height mark as 1079 a Dyatlov group tent was found and was not inspected due to the beginning of a violent blizzard. I gave the order not to touch the discovered tent. On February 27, we raised the landing groups from Mount Oyko-Chakur and Gumppokay and transferred to the valley of Auspiya river in the area of ​​height 1079 to participate in the search of the hikers. From February 27 till February 29 we built a camp site in the upper sources of Auspiya river to search for deceased hikers.

From the day of the discovery of the tent and the first bodies, in the camp for the search of the hikers was working a group of 35 to 25 people. During this period, we surveyed an area of ​​about 1500 hectares by triple probing each square meter with 5-7 metal probes verified the entire valley of the upper sources of Lozva river. we couldn't find any other hikers. The remaining search party continues the work with the same intensity.

* Ortyukov teaches in UPI. Most likely, he was more intimate with the UPI staff than with the students. During the interrogation, he most likely made a мисатке and called the Slobtsov group the Slobodin group. Slobodin is the chairman of the UPU trade union and did not take part in the search operation in 1959. 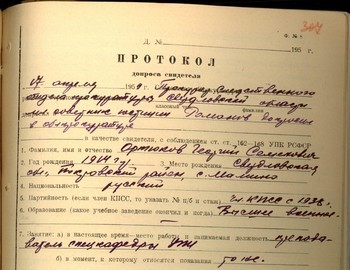 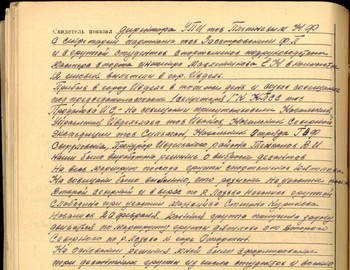 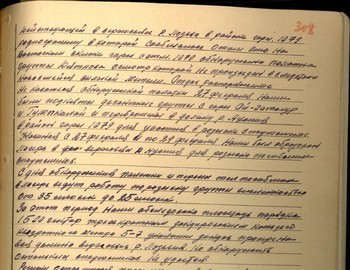