On 20 April 1959, in compliance with Article 162-168 of the Code of Criminal Procedure of the RSFSR, the prosecutor criminologist of Sverdlovsk region Romanov interrogated in the District Prosecutor's Office as a witness

Witness testified: In mid-February of this year, a group of hikers from the institute led by Dyatlov did not return from the expedition on the scheduled date. When all possible terms have expired, the directorate of the institute, the trade union committee and the sports club started organizing search groups of hikers. The first group was the one led by Slobtsov, which included me.
On the 21st (I do not remember exactly, maybe on February 22), the group was taken by plane to Ivdel, from which the next day by helicopter was dropped to Oorten along with two guides from the local population.
Not finding a note on Otorten, which Dyatlov group would have left, if they had been there, our group descended to the valley of Lozva river, where we didn't find any tracks. Then
On the 24th the group continued to traverse along Lozva, then pass over the ridge and came out in the evening to the valley of Auspiya river, on the left bank of which was found old snow-covered trail of Dyatlov group ski tracks.
On the 25th the group was divided into 4 parts. 3 people (Slobotsov, Sharavin and the local guide Ivan) followed the Dyatlov group trail up Auspiya. Two other groups of 3 each engaged in exploration of the right bank of the Auspiya river, hoping to find

the ski tracks of the Dyatlov group, going south, where they should go, descending from Otorten. Such ski trail was not found. In the evening everyone returned to the camp where two people were left.
Slobtsov and Sharavin returned with sad news. After following Dyatlov group trail for several kilometers, they further took the azimuth to the pass between the valleys of Auspiya and Lozva rivers, where, leaving the tired guide, they went along the slope of height 1079 to the black spot attracting their attention, which turned to be the torn and half-buried Dyatlov group tent. From their words, only the front part of the tent was not covered by snow. Near the tent was lying (or rather was stuck) an ice ax, with which they tried to dig up the snow covered part of the tent in the hope of finding someone there. They also found a cut in one skate of the tent. Since it was already late, they took the ice ax, a camera, a diary (it seems, Slobodin's), a Chinese flashlight and some other items, I don't remember what exactly, returned with a guide to the overnight camp site and told us about what happened they saw. This was reported same day to Ivdel on the radio (radio and radio operator arrived at the site of our base camp on reindeer with some Mansi). The next day February 26, part of the group, having left earlier from the camp in order to find a place for the camp closer to the scene, and while crossing the pass of Auspiya-Lozva found two half-naked bodies near the cedar,
/Corrected by me Lebedev (signature)/

one of which was Krivonischenko. Shocked by what they saw, the guys returned to the pass, where at this time a guide came with a dog and, it think, the Karelin group.
The conductor with the dog, Karelin goup and I with Sharavin went up to the tent. The tent was set up soundly and skillfully. On the slope of the mountain covered with snow, a platform was evened obviously with skis. On it were laid the skis, runners up. The tent was pitched on top of the skis with the help of ski poles. The bottom of the tent was covered with backpacks, of which the food was taken out, on the backpacks were laid storm suits, quilted jackets, blankets вере spread out. On this day we decided not to sort out things from the tent
The middle of the tent was fallen, the tent itself was torn, maybe our guys (Sharavin and Slobtsov) tore it, but on the skate facing down, there was a clear even cut, made in my opinion by a knife.
On that day, after dismantling part of the tent, we packed all the items in a blanket and put them in the tent, in order to analyze the tent the next day in the presence of the prosecutor, who flew to the site of the incident the night of February 26.
The next day, in the morning, in the presence of comrade Ivanov, all items were taken out of the tent. Lebedev (signature)
/Two lines crossed out by me Lebedev (signature)/

There were many items in the tent. Near the entrance of the tent, which I believe was open, lay the stove inside its case. The pipes of the latter were inside the stove, which indicates that the stove was not attempted to be taken out , lit although outside the tent on the rear end end in the snow I found a log, undoubtedly intended for the stove.
Inside the tent were found buckets, at the entrance lay an ax, maybe 2, and saw with a cover. On the head side (if you stand facing the entrance of the tent, then on the right side of it, which is lower on the slope) there were lay personal belongings of the deceased and food products taken from the backpacks. Dyatlov belongings were discovered at the very end of the tent (a field bag containing money, documents, diaries, a camera, etc. After that lay Slobodin and Kolevatov I think, because there were found their belongings. At the entrance to the tent lay either the hiker on duty or the supplies manager because cuts of ham were found here, and it seems that only one piece was eaten (the edge was found), in one of the mugs there were, in my opinion, the remains of oatmeal porridge, possibly the morning remains. We found scattered rusks (our guys could could have cut the bag from the rusks when they first cleared an entry into the tent). In general, there there were not that many products in the tent (for five days at most), which told us that Dyatlov group had made a storage, which we later learned from the diary, it seems, was Dyatlov's, and then found out by the maps they drew.
In the tent there were several pairs of felt boots,

except for one pair of shoes, almost all the outer clothing. In the tent we found a ski pole from which the upper end was cut off along a neat end cut and another cut was made. This suggests that apparently someone stayed in the tent much later than others, maybe for a day. Because no one will cut a pole, that may still be useful, because there is nothing else to do.
In one place of the tent she was torn and then fastened with a pin.
Footprints leading down the slope from the tent were really quite clear. I'm not a pathfinder, and I can not say how many people left them, but in my opinion they descended in a group, otherwise the tracks would be dispersed, since in the night in which the disaster allegedly happened, there was a terrible blizzard, and these footprints go side by side at all time and divide into 2 trails only far below (approximately 800 meters) on the stone ridges. It seems that in some places prints of bare feet are visible. Most of the tracks are made with feet in socks. 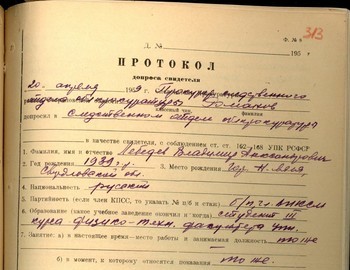 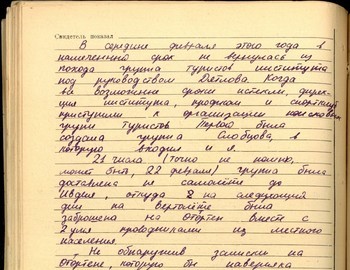 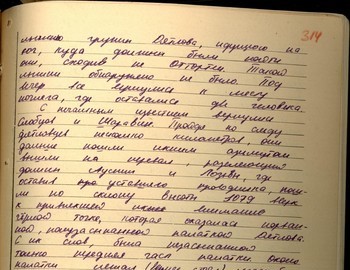 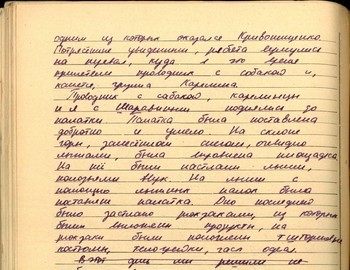 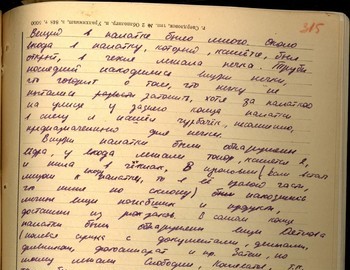 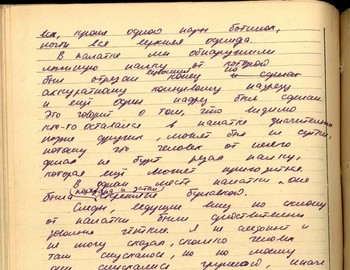