At the end of 1958 under the leadership of I. Dyatlov students organized a trek to the Northern Urals. The group consists of experienced hikers, students and graduates of the Ural Polytechnic Institute. At the time of consideration of the upcoming expedition, the project team included 11 people. Head of the group was I.A. DYATLOV. Group members: L.A. Dubinina, A.S. Kolevatov, Z.A. Kolmogorova, Y. Vishnevskiy, R.V. Slobodin, V.N. Bienko, Y.G. Krivonischenko, N.V. Thibeaux-Brignolle, Y.E. Yudin, Y.N. Doroshenko.

The route developed by the group went to the remote northern district of the Sverdlovsk region, the upper sources of Lozva river. It was the first winter route in the area. It went from 2-nd Northern along Lozva river, to the upper sources of Auspiya river. In the upper sources of Auspiya river the group had to build a storage shed and make a 3 day radial hike to Otorten. On the first day cross the valley of Lozva river, on the 2nd day - come to the foot of the Mt Otorten on the third day - get to the top Mt Otorten and return the pass to a warehouse, on a prepared overnight. From r. Auspiya Valley Group D. cross the valley of Aupiya river and Vimera river down south to Mt Oyko-Chakur. One day was allocated to the ascent of Mt Oyko-Chakur. The group was supposed to go along northern Toshemka river and exit in Vizhay. The entire route of 300 km the group was supposed to cover in 18 days.

City route commission at the Committee for the Sverdlovsk Physical education and Sport January 8, 1959, review the materials of the Dyatlov group expedition - approved the staff of the group - 10 members and trekking route /see Route Commission protocol/.

deviations from the route and timetable, and the occurrence of special hazards during heavy weather deterioration, etc.

We consider the ruling of the Route Commission to be proper.

January 23, 1959 Dyatlov received route book №5 in the City Committee of the Physical education and Sport signed by V.L. Ufimtsev. The route book included 11 people. The 11th member was S.A. Zolotaryov, a former instructor of Kaurovsk tour base. S.A. Zolotaryov was previously approved by the City Route Commission as member of S.N. Sogrin group trek of III category of difficulty. S.A. Zolotaryov preferred a shorter trek than Sogrin group was planing so he requested to be transferred to Dyatlov group expedition.

Compiled by analysing the diaries, drawn maps, the testimony of people who met with the group on a route and studying group belongings - gives the following picture of the progress of the expedition.
January 23 - Dyatlov group left Sverdlovsk.
January 24 - the group arrived in city of Serov.
January 25 - the group arrived by bus in Vizhay.
January 26 - a truck drove them to 41-st district.
January 27 - 16:00 group left for 2nd Northern and arrived late at night.
January 28 the group started up Lozva river. One member of the group Y.E. Yudin, due to illness turn back and on January 29 the group moves along Lozva river, and then along Auspiya river.
January 30 - the group continues to move along the Auspiya river.
January 31 the group approaches the pass of Lozva valley and camps under the pass.
February 1 group builds a storage site and in 15:00 starts towards the pass. In the twilight, about 17 or 18:00 the group stops and pitches the tent. The installation of the tent takes about an hour, so we can assume that the hikers got into the tent at about 19 - 20:00

February 26, 1959 the headquarters in Ivdel received a radiogram

that the abandoned tent was found.

February 27 it was reported that the bodies of Doroshenko, Krivonischenko, Dyatlov and Kolmogorova are found.

The study of items found inside the tent, and the tent itself, paints the following picture. The tent was placed on a mountain slope of peak 1079, on an angle of about 18-20°. The entrance of the tent was facing the pass. The snow under the tent was flattened and skis were stacked. The tent was almost covered with snow. Sticking out from the snow was a propping pole on one side of the entrance. The entrance to the tent was uncovered and sheets were showing that served as a curtain. The excavations revealed that the slant of the tent facing the hill was torn close to the entrance sticking out from the hole was a fur jacket. The slant of the tent facing downhill was ripped to shreds. In front of the entrance to the tent was a pair of tied skis. Items in the tent were found as follows. At the entrance lay a stove, buckets (one with a jar of alcohol) saw, an ax. A little further from the entrance lay cameras. At the far end of the tent were found: bag with maps and documents and Dyatlov camera, tin box with money, Kolmogorova diary. Next lay Dyatlov and Kolevatov jackets. In the corner stood a bag of crackers and a bag of barley. On the right (to the entrance) by the wall of the tent lay other products. Near them were found two pair of shoes. The remaining six pairs of shoes lay at the opposite wall of the tent. Somewhere in the middle of the tent were found 3 and a half pairs of felt boots. Near the crackers lay a log taken from the place of last night. Backpacks were spread out on the bottom of the tent. On top were quilted jackets and then quilted blankets. Part of the blankets were not spread out. On top of the blankets were found the warm belongings of the members of the group, including most of their warm clothing.

Hikers were found far away from the tent - Kolmogorova 850 m, 150 m further Slobodin, and after another 180 m and Dyatlov, after 300 m, under a cedar near a campfire Doroshenko and Krivonischenko. Kolmogorova was found under 10 cm of snow, discovered by the tracking dog lead by Moiseev. She was lying on her right side. The position of the body, arms, legs, is indicative of the fact that she was struggling with the wind on the steep slope. Compared with the others, she was dressed warmer. She didn't have shoes.

Dyatlov was found leaning his head against a birch tree. He was visible from under the snow. He was dressed in ski pants, underpants, sweater, checkered shirt, a fur vest. On the right foot he was wearing a wool sock and cotton on the left.

Doroshenko and Krivonischenko were found side by side, slightly covered with snow powder. They lay under a cedar tree near a makeshift fire. Doroshenko was lying on his stomach. Under him were found branches broken from a fall into several pieces. Krivonischenko was lying on his back. Both were almost undressed. They wore checkered shirts and underpants. Socks on their feet.

March 5 as a result of searching using probes under a layer of snow of 15 cm was found Slobodin. He too froze in the dynamic pose as Kolmogorova. He was dressed relatively warmer. He was wearing one felt boot (the second was found in a tent).

All were found lying on one line in the direction of the prevailing wind, and within the ravine. According to the experts the tent was ripped open from the inside with a knife and a few strokes. The experts said that their last meal was 6-8 hours prior to their death. It cause of death of all hikers found was determined to be the cold and wind.

It looks like that the time of the accident the group was changing clothes.

They exited the tent in a haste, didn't allow any minute delay.

Hikers who have such experience as Dyatlov group clearly understood that the going out of the tent so scantily clad, in the absence of visibility, squalls and low temperature - is sure death.

Hence, the reason forcing the hikers to leave the tent could only be fear of immediate death.

The group began to retreat down the hill in an organized manner, but then in the darkness and blowing snow they scattered on the stone ridges and having lost touch with each other died in a snowstorm. 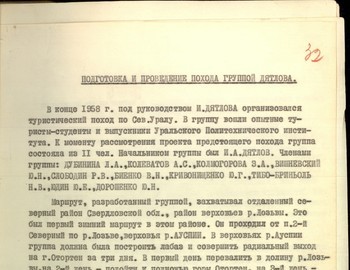 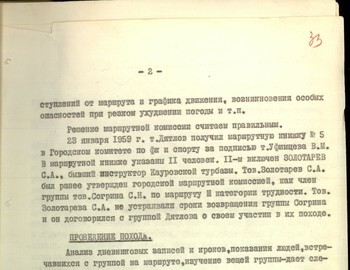 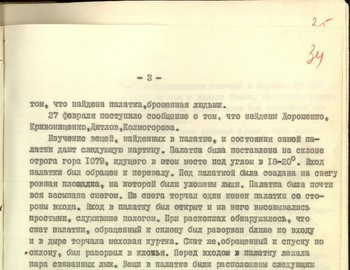 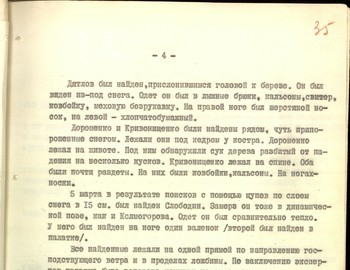