Decision on the extension of the investigation

The term of the investigation of the case to extend
till 28 May 1959
Prosecutor of the Sverdlovsk region
State Counselor of Justice
class 3
N. Klinov

to extend the investigation period

Prosecutor criminologist of the Prosecutor's Office of Sverdlovsk region Jr. counselor of justice Ivanov, having examined the criminal case on the death of hikers in the Ivdel district,

In February 1959, a group of hikers from the Ural Polytechnic Institute, consisting of 9 people, perished on the height area marked "1079" in the Northern Urals.

The bodies of 5 hikers and part of the group's equipment, the corpses were found by the search, the remaining participants of the trek were not found.

In connection with the still missing participants in the hike, it is not possible to establish finally the cause of the death of hikers and the perpetrators of this, and the meteorological conditions of the area of ​​the disaster do not allow to carry out prospecting works on a scale that would allow finding other participants in the expedition.

The case of the death of students was instituted on February 28, 1959 and the investigation term expired on April 28, 1959.

Guided by art. 116 of the Code of Criminal Procedure of the RSFSR,

To initiate a petition to the prosecutor of the Sverdlovsk region to extend the investigation of the case until May 28, 1959.

Deputy Chief of the Investigation Department 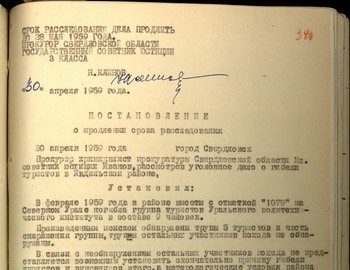