May 28, 1959 prosecutor criminologist of the Prosecutor's Office of the Sverdlovsk region ml. counselor of justice Ivanov

interrogated in compliance with Article 169-173 of the Code of Criminal Procedure of the RSFSR as an expert of the below-named, who gave the following information about himself:

The text of the conclusion of the examination *)

Question: From what kind of force could Thibeaux-Brignolle have received such injury?

Question: Is it possible that Thibeaux-Brignolle was hit by a rock that was in someone’s hand?

Answer: In this case, there would have been damage to the soft tissue, and this was not evident.

Question: How long could Thibeaux-Brignolle have lived after the trauma. Could he have moved on his own, talked, etc.?

Answer: After this trauma, Thibeaux-Brignolle

*) The text should begin with a statement of questions presented by the investigation and the pertinent materials on the basis of which the conclusion is made. The content of the expert conclusion consists of the following parts: 1) a description of the methods and procedures used by the expert in the research process; 2) a narrative (description) of the results obtained by the expert; 3) conclusions of the examination (answers to the presented questions)

Answer: I think the character of the injuries on Dubinina and Zolotaryov – a multiple fracture of the ribs – on Dubinina were bilateral and symmetrical, and on Zolotaryov were one-sided. Both had hemorrhaging into the cardiac muscle with hemorrhaging into the pleural cavity, which is evidence of them being alive [when injured] and is the result of the action of a large force, similar to the example used for Thibeaux-Brignolle. These injuries, especially appearing in such a way without any damage to the soft tissue of the chest, are very similar to the type of trauma that results from the shock wave of a bomb.

Question: How long could Dubinina and Zolotaryov have lived?

Answer: Dubinina died 10-20 minutes after the trauma. She could have been conscious. Sometimes it happens that a person with a wound to the heart (for example, a serious knife wound) can talk, run and ask for help. Dubinina’s situation was one of complicated traumatic shock resulting from the bilateral rib fracture, followed by

internal hemorrhaging into the pleural cavity. Zolotaryov could have lived longer. It needs to be taken into account that they were all trained, physically fit, and strong people.

The protocol has been read to me, written correctly. 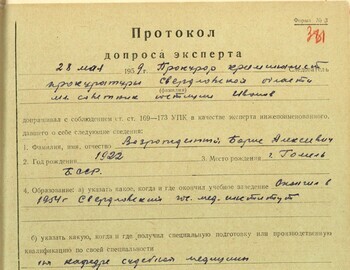 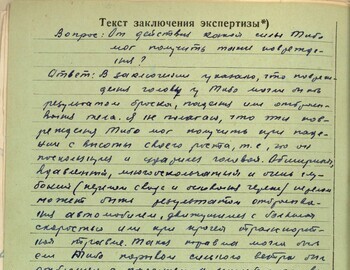 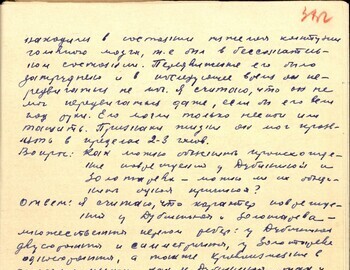 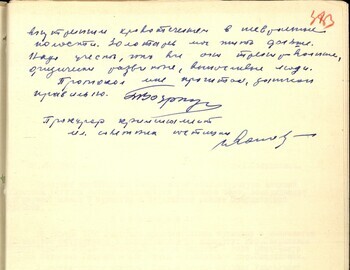