March 5, 1959 Prosecutor Ivdel Jr Counselor of Justice questioned in the prosecutor's office of Ivdel as a witness, in compliance with Articles 162-268 Code of Criminal Procedure

The witness testified: Answering the questions that were presented to me. From January 24 to February 1, 1959, included, I was traveling on business to 41st district where the Energo Lesokombinat of Ivdel has logging. There are 50 workers that live there. The district is 40 km straight north from village of Vizhay. On January 27, 1959 at 5:00 pm group of 10 people arrived by truck from village of Vizhay. With skis and equipment. They had 10 pair of skis on their backpacks. I don't know their names. They spent the night in the hostel together with the workers. In the evening I went to the hostel and saw this group of hikers, and had a brief conversation with one of them about their trek. The student said they will set off on from 2nd North mine, and then along the ridge of the Urals, specifically he did not say, and return along the Ural Mountains and reach the village of Vizhay again. That was the whole conversation. January 28, 1959 morning, worker Velikyavichus Stanislav was sent to 2-North mine with two horses pulling a sled on iron pipes. These draft horses transported hikers equipment. On January 29, in the barracks of the 41st district I met

worker Velikyavichus who led the sled. I asked him how did they get there. He replied that they arrived safely. He didn't mention that he brought back a student, and I did not ask, and I haven't seen this student personally. During the last days of my trip there was strong wind with a snowfall in the forest and the roads were heaped up with snow and needed a thorough cleaning with bulldozers. When I went home, there was still strong wind and the temperature was colder than 30° below zero. I have lived here for 32 years and we have rarely had winds like this. I did hear anything about the students till February 21, 1959. On February 21 I was summoned to the City Commetee of the CPSU by comrade I.S. Prodanov and told that a group of hikers are missing and they need to be searched for. 21.02.59 a student of the Polytechnic Institute, I do not know his name, Aircraft commander Spytsin and a navigator took off on an airplane "Yak" in the direction of the village of Vizhay, thence up Lozva river through the 41st district, 2nd North mine,  North mine - to the mouth of Auspiya river, up along Auspiya river. Then returned back through the 2nd North mine 41 district turn to North Toshemka going west, flew to the Ural mountain range with the aim to fly past and explore the western slope, but there were

clouds and strong wind, and we returned to the airport in the city of Ivdel.

22 II -59, I again flew by helicopter with Institute representative Gordo, made landing in the village of Vizhay, where we took forester Aleksander Ivanovich Kuznetsov and flew to North Toshemka river to the yurt of Aleksander Prokopyevich Anyamov (Mansi) There we sat down. Anyamov said that the hikers did not stop come by his yurt. Then we flew to the upper sources of Vizhay river above Anchucha inflows. There we landed and together with Kuznetsov we went to the yurt, which included 5 Mansi yurts Mansi Bahtiyarovs Pyotr Yakovlevich, Nikita and Nikolay. Where we learned that the students drank tea, but did not spend the night at Mansi Bahtiyarov Pyotr Yakovlevich about 16 days ago. This was said by Katerina Mansi, and the men, she said went that night 21.02.59 to hunt deer in the woods to the Urals for meat. We didn't here anything about Bahtiyarov men being absent from the yurts for 9 days. We got up and flew West to the Urals and saw a clear Mansi sleds trail going West to the Urals starting from Bahtiyarov yurt along Vizhay river for 1.5 km. Wee did not find any traces of the hikers. I can't add anything else. Properly recorded, it was read to me in person. 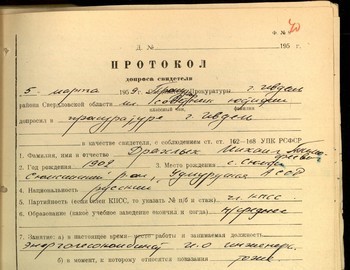 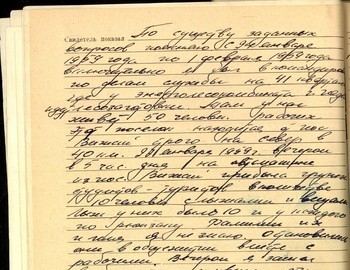 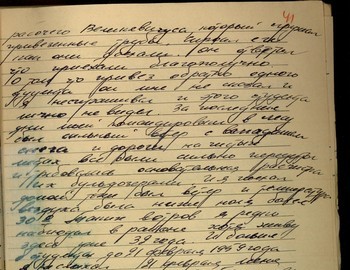 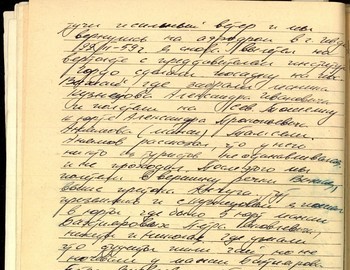