March 7, 1959 I, Head of the Polunochnoe Police Station Ivdel GOM Chudinov interrogated in the village of 100 quarters as a witness, with the observance of art. 162-168 Code of Criminal Procedure of the RSFSR

Warned about the responsibility for the first part of Art. 92 of the Criminal Code of the RSFSR for refusing to testify and for giving false testimony.

In January, 1969, I do not remember the date exactly in the village of 41st district where at that time I worked there was a group of students among whom there were two girls and the other were guys. These hikers slept one or two nights in the village of 41st district. At the direction of the chief of the section, Comrade Razhnev, I accompanied these hikers to 2nd North village they went on skis and I transported their backpacks on a sled. We arrived at the village of the 2nd North at eleven o'clock in the evening, where at that time in the village there was no one of the citizens and in general no one lived there. I spent the night in the hut with hikers, had breakfast together the next morning. One of the hikers put a rock core in the duffel bag from the drilling and asked me to take it to the 41st district. At the same time, he said that I should head back, and he would catch up with me, since he could not go on a trip further due to illness, his leg ached. Hikers in my presence talked about the trek route, but I do not know the details of their heading. I heard that they mentioned mountains, rocks, forests in the conversation and what places to take pictures of. I left the village around 10 o'clock in the morning, the group stayed behind. At 41st district I arrived about three o'clock in the afternoon and after a while there was one hiker who collected the material. On the way there and back I didn't see Mansi, or any other citizens. Written from my words correctly.

It is written correctly from my words. The testimony was given in Russian. I read the record. And verified with my signature. 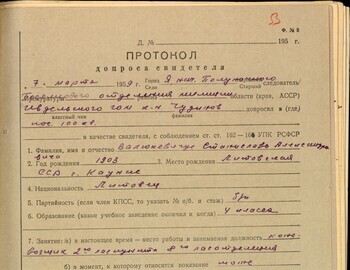 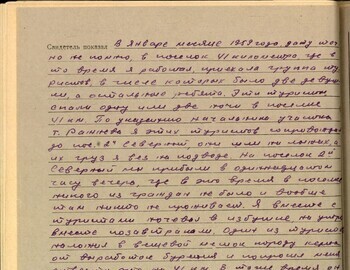