On 7 March 1959 the prosecutor of Ivdel district of Sverdlovsk region Jr Counselor of Justice Tempalov interrogated at the premises of the public prosecutor of Ivdel as a witness, with the observance of art. 162-168 Code of Criminal Procedure of the RSFSR

The witness testified: Answering the questions at hand. I was born in 1915 in the city of Ivdel, and I have lived here all my life. At the moment I have three brothers and three sisters that are alive. One of my brothers lives and works in Ivdel as fireman. His name is Dmitriy Gorbunov. My second brother Pyotr Gorbunov is serving a sentence for rape in Ivdellag since 1956. The third brother Evgeniy Gorbunov Spiridonovich lives in Sverdlovsk and works in the city district. My sisters are also alive. In 1941, we lost in the war our brother Yakov Gorbunov Spiridonovich. We had another brother, Georgiy Gorbunov, who died at the age of 19 before the war in the village of Krasniy Octyaber working at the mill as a loader and a bag of flour fell on him causing his death. He was buried in the city of Ivdel.

Mansi didn't kill any of my relatives and friends, or anybody else that I have heard about. If that were the case, I would have known about it. Regarding Mansi sacret mountain, I heard that they go there to pray once a year, but I don't know where is this mountain. The fact that Russians are not welcome there is

not known to me. I have nothing more to add
it is recorded correctly and I have read it. 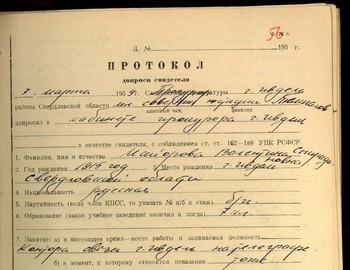 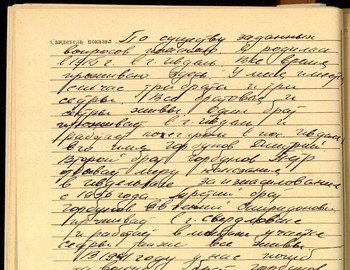 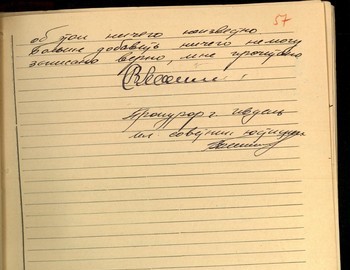