The witness testified: Answering the questions at hand. In the end of April my brother Lopatin Dmitriy Pavlovich went on the hunt for ducks boating on Lozva river. My father Pavel Lopatin was with him as well as one Mansi and his son Nikolay. Both Mansi are not alive now. That was in 1934. My father was on the back of the boat with the Mansi, and his son was on the back of the boat with my brother. In the morning near the village of Sobyanin my brother was not in the boat. My father asked the Mansi where his son, Dmitriy, was. The Mansi said that their boat capsized and he drowned in the river. The boat was upside down indeed as my father told me. Then my father went to the police and they began to look for my brother in Lozva river where he drowned 40 km from Ivdel in all. But my brother was not found. He was found in the river only after 6 years when they began to blow the forest logjam. My brother Lopatin Venedict went for my brother, identified him and buried him in the village of Sobyanin. The body of my brother was examined by a doctor, I don't know his name, whose conclusion was that there was no foul play, no signs of violent death

were found. If the Mansi drowned my brother, nobody knows. My father went immediately. Mansi who went hunting with my father and brother are not alive anymore. My father lives in Ivdel on Frunze St №17.

My father and brother knew well these Mansi and were friends with them. As my father said they never had any quarrels. When my brother was found in the river his feet and hands were not tied.

Properly recorded, I have read it. 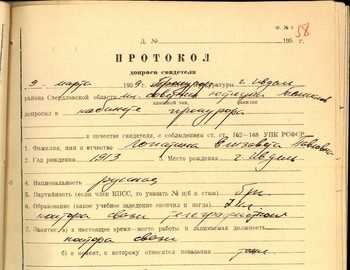 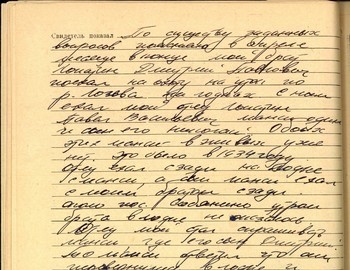 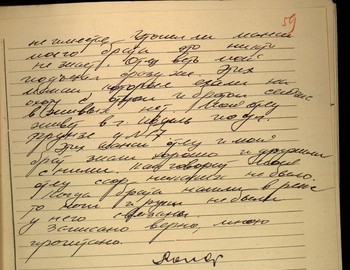