Answering the questions at hand. I learned that they are looking for the hikers on 21 or 22/II-59 and at this time I was in Bahtiyarovs yurt in the upper Vizhay. I arrived there on 20 or 21/II-59 at my sister's Nina Bahtiyarova. I went there with Pyotr Yakimovich Bahtiyarov, Nikolay and Procopiy for deer - we hunt then in the forest 8 km from the yurts. When we left the helicopter flew over and when they came back to the yurts we learned from the women that they are looking for the hikers. Hikers have stayed previously at Pyotr Bahtiyarov and then have gone somewhere. I don't know and I didn't ask where did they go. I live on Ivdel river close to 1st dam about 60 km from Vizhay. I heard that they suspect that Mansi scared the hikers and they died. I don't believe this to be true. There is not a single case where Mansi attacked Russians, there is no reason for this. Mansi payer mountain is located near the Bahtiyarovs yurts 30 km in the upper Vizhay river. On this mountain no one is forbidden to go Russian men and women, same as the Mansi. This mountain has never been guarded. There aren't any valuable things there. How it was before 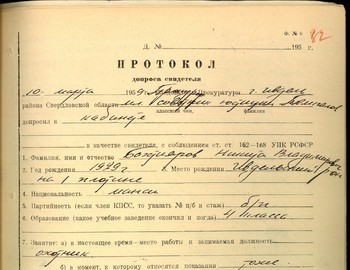 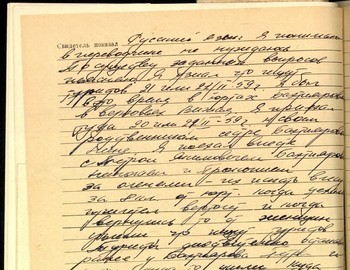 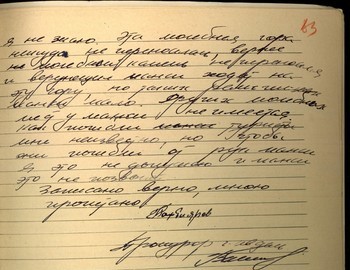