b) at the moment of the events: the same

The witness testified: My Russian language is bad and I need an interpreter. An interpreter Bahtiyarov Nikita Vladimirovich is warned of perjury in the translation and mistranslation of art. 96 CC. Signature

I arrived at Ivdel four days ago, together with Nikolay Bahtiyarov from their yurts, which are located 60 km from Vizhay. We came first to Nikita Bahtiyarov to buy his small-caliber rifle and register it in the police in the city of Ivdel. Nikolay bought the rifle from Nikita. I learned about the missing hikers on 21/II-59 from Mansi Nina and Katerina Bahtiyarov women. At the time when the helicopter landed near the yurts Petr, Nikita, Nikolay and I were hunting deer. The yurts were only women and my brother Sergey. In February and January we didn't leave far from home. Hunted near the settlement named after the 19th party congress. Nikolay and Pyotr Yakimovich Baktiyarov went in the middle of the month of February 1959 and Burmantovo Suevat-Paul Nikolay, he is tending the reindeer at the Mansi children boarding school and went to work. Pyotr and I went to the village of Suevat-Paul

to visit Mansi. Pyotr doesn't hunt well, he can't walk because he has TB. Prayer mountain is in the upper sources of Vizhay river not very far from our yurts about 30 km. I myself have never attended a prayer ceremony on the mountain, and Mansi are not a strong believers nowadays, young Mansi don't recognize religion. Me neither. I do not know what happened to the hikers, and haven't heard anybody talking. I don't know where are they now. 8 hikers slept at Pyotr and went along Vizhay river, and I don't know what happened with them after that. Where were the hikers killed or weather they are still alive, I don't know.

It is recorded correctly, it was read to me. 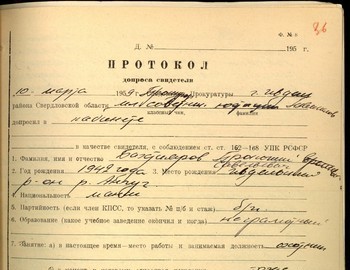 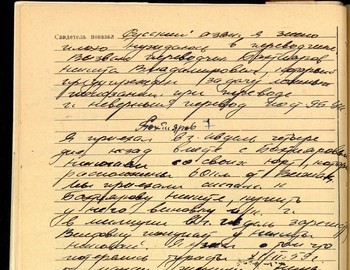 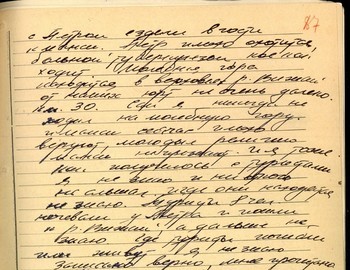