Draft resolution on the outcome of the investigation

[ draft of several phrases of the project ]

Subsequently by the ski track, preserved at the time of the search, it was possible to establish that moving towards the valley
Returning on 31.I.1959 in the valley of the Auspiya river and knowing about difficult terrain conditions of the area height 1079 Dyatlov, as leader of the group where they were supposed to climb, Dyatlov, as leader of the group, made a gross mistake starting clim the group started climbing on 1.II.1959 only at 15.00.

[ project sheets are crossed out and have handwritten revision in italics ]

I appoint
Prosecutor of the Sverdlovsk Region
State Counselor of Justice, Class III

All members of the group had a good hiking training and could participate in expeditions of category III of difficulty. The group was equipped with the necessary equipment and food. The trek was financed by the trade union committee of the Ural Polytechnic Institute.

Arriving safely at the start of the trek, the village of the 2nd Northern in Ivdel District, the group started off on Jan 28, 1959. went camping. Y.E. Yudin could not continue hiking due to illness, and he turned back from the 2nd Northern.

It can be deducted from diary entries, topos of the route and developed films of the hikers that on Jan 28, 1959 the group went upstream Lozva river, on Jan 30, 1959 the group continued to move, Jan 31, 1959, the hikers reached Auspiya river and tried to pass to the valley of the Lozva river via the pass, however, due to the low temperature and strong wind, they were forced to return lower and and have a overnight. Feb 1, 1959, according to the plan in the upper reaches of the Auspiya river the group built a cache in which they left part of the food supplies and all the excess equipment. At 15:00 they began the ascent to the pass

Subsequently, from the ski road track of the hikers, preserved at the time of the search, it was apparent that moving to the valley of the fourth tributary of the Lozva river, hikers deviated 500-600m to the left and instead of the pass formed by the peaks "1079" and "880", they reached the eastern slope of the peak "1079". This was Dyatlov’s second mistake.

Using daylight hours to climb to the peak "1079", in the presence of strong wind, common in this area, and temperature at about 25-30°C, Dyatlov found himself in unfavorable overnight conditions and decided to pitch a tent on the slope of the peak "1079" so that in the morning of the next day, without losing altitude, to continue to Mt Otorten, approximately 10 km away in a straight line.

In one of the cameras, a photo frame (last in a row) was preserved, which shows the moment of excavation of snow for setting up the tent. Considering that this frame was shot with a shutter speed of 1/25sec, with aperture of 5.6, and with a film sensitivity of 65 units.GOST, as well as taking into account the frame density, we can assume that the hikers set up the tent at about 5 pm on Feb 1, 1959. A similar shot was taken by another device. After this time, not a single record and not a single photograph was found.

According to the protocol of the route commission, the group leader Igor Dyatlov had to sent a telegram on Feb 12, 1959, to inform the UPI sports club and the Physical Culture Committee (comrade Ufimtsev) about their arrival in the village of Vizhay. Since the target date Feb 12, 1959 passed without any information from the group, hikers who knew Dyatlov closely began to insistently demand the measures to serach for the group and on Feb 20, 1959 the leadership of the institute sent a search group along the Dyatlov route, followed by several more groups. Later, soldiers and officers of the Ministry of Internal Affairs, planes and helicopters of civil and military aviation were sent on the search.

On Feb 26, 1959, on the eastern slope of peak "1079" the tent of the group was found with all the equipment and food in it. The tent and everything that was in it was well preserved. Inspection of the tent showed that it was set correctly and provided the hikers with an overnight stay. In the tent were 2 blankets, backpacks, storm jackets and trousers. The rest of the blankets were crumpled and frozen. On the blanket were found several pieces of crust from a loin.

The location and availability of items in the tent (almost all shoes, all outer clothing, personal belongings and diaries) indicated that the tent was abandoned suddenly by all hikers at the same time, and, as established by the subsequent forensic examination, the leeward side of the tent where hikers usually laid their heads, was cut from the inside in two places, in areas that provide a free exit of a person through these cuts.

26.II.59 in 1500 meters from the tent, at the forest boundary, the remains of a fire are found, and near it were the bodies of Doroshenko and Krivonischenko, stripped to the underwear. At 300 meters from the makeshift fire, in the direction of the tent, was found the body of Dyatlov, 180 meters away from him - the body of Slobodin, and 150 meters from Slobodin - Kolmogorova body. The last three bodies were located on a straight line from the fire to the tent. Dyatlov lay on his backs, his head in the direction of the tent, his hands clasping the trunk of a small birch. Slobodin and Kolmogorov lay face down, their pose testified that they were crawling to the tent. Money and personal effects (pens, pencils, etc.) were found in the pockets of Kolmogorova, Dyatlov and Slobodin. On his left hand pointing outwards Slobodin was wearing a watch that stopped at 8:45. Dyatlov's watch showed 5:31.

The dead Thibeaux Brignolle and Zolotaryov were found well-dressed, worse dressed Dubinina - her jacket made of artificial fur and a cap were found on Zolotaryov, Dubinina's naked leg was wrapped in Krivonischenko's woolen pants. Near the bodies, Krivonischenko's knife was found, which cut off the young firs near the fire. On the hand of Thibeaux-Brignolle were two watches - one of them shows 8:14, and the second - 8:39.

/crossed out diagonally - start/
Kolevatov has only bruising.

Physicotechnical examination found that the clothes of Zolotaryov and especially Dubinina are significantly contaminated with radioactive dust.

If we take into account that before the discovery the corpses of Zolotaryov and Dubinina have been were in the water for a long time, then we should assume that their radioactive contamination was significant.

The investigation did not establish the presence of other people on February 1 or February 2, 1959 in the area of ​​the height "1079", except the hikers from Dyatlov group. It is also established that the population of the Mansi people, living few days away 80-100 km from this place, was not interested in the death of the group not from religious, not from selfish motives. is Russian friendly, offers hikers accommodation, assistance etc. The place where the group died is considered to be unfit for hunting and reindeer breeding in the winter.

For the shortcomings in the organization of sports work and weak control of the bureau of the Sverdlovsk GC the CPSU announced party penalties punished in party terms: the director of the Ural Polytechnic Institute Siunov,

ruled:
The criminal case on the death of the group of hikers and further proceedings are to be terminated. 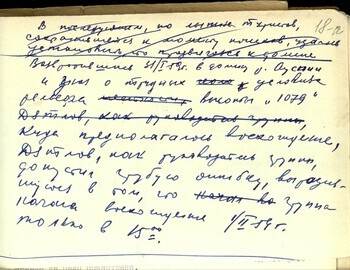 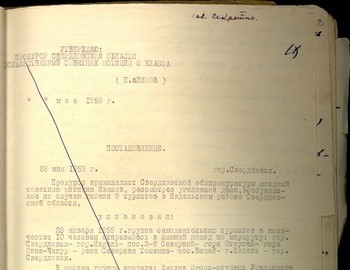 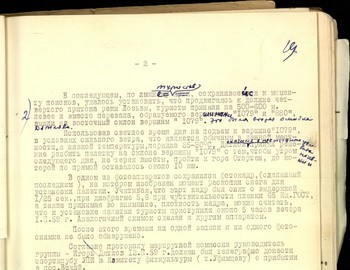 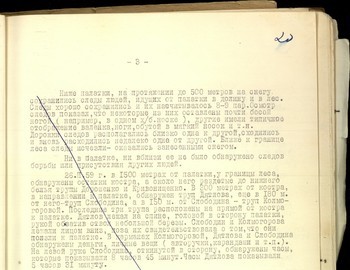 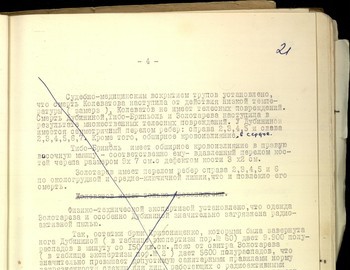 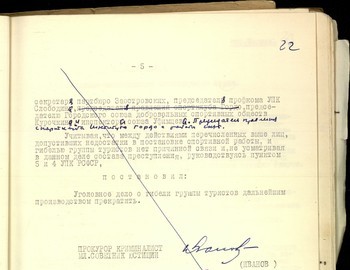