My brother had a pocket watch, he fixed it, similar to the one here (Molniya).

in VIII, early September in Perm for about a month, lived in Perm.
31/XII went on a hike along the Perm road to station Boytzy.
He was at the Faculty of Physics and Technology. 54-55-56 in Moscow, at the research institute.

Finnish knife with leather scabbard, found in the tent, identified by Kolevatova as belonging to her brother.

A key from a door lock found by Kolevatova in his pocket was identified and returned to her.

A handkerchief with purple flowers was identified by Kolevatova and returned to her.

not found on him. 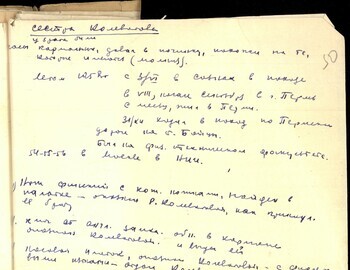