I am reporting again, that Krivonischenko Georgiy Aleekseevich died during an expedition in the mountain region marked as 1079 in the Ivdel region of the Sverdlovsk district.

G. A. Krivonischenko is buried by relatives in the city of Sverdlovsk. Death certificate issued by Ivdelskiy City registry office is given to the parents of the deceased.

Similarly letter was sent to you on April 23 this year, to the address indicated on the stamp of your letter, but the letter was returned for lack of addressee. 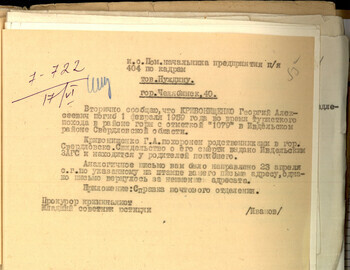