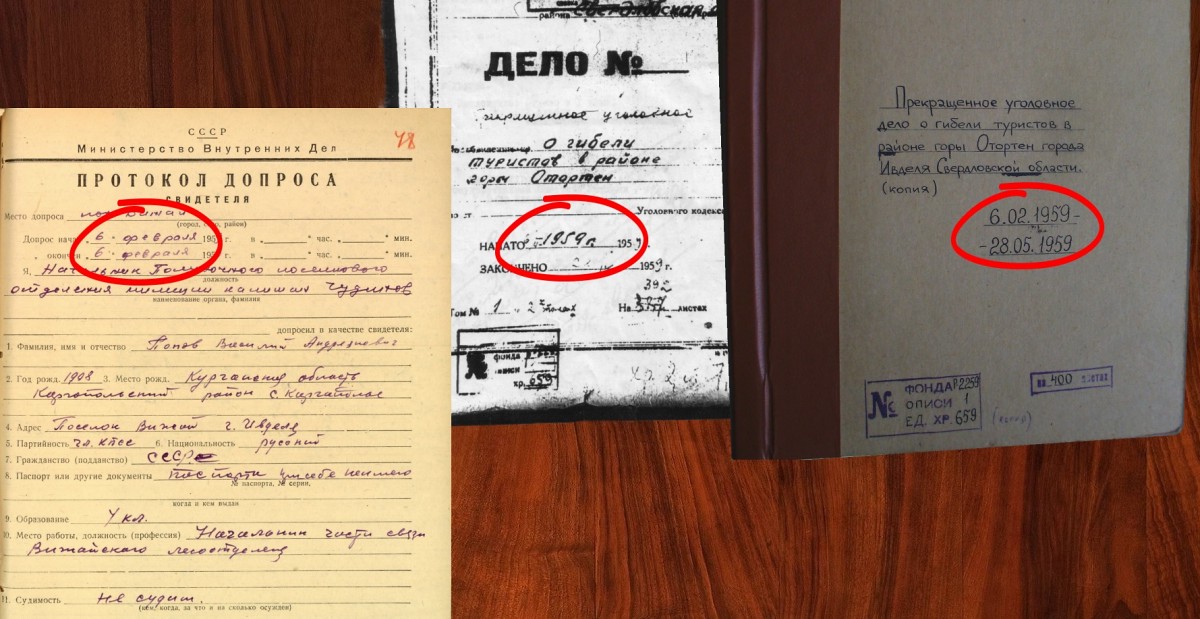 The date on the cover of the official Case file is 6 February 1959. How’s this possible if Dyatlov group was not even due back by that time? The conspiracy advocates point this as a clear evidence that the investigation started before the official discovery of the first dead bodies. Even though the physical criminal case file was recovered, having suffered from age and frequent use, the initial date of 6 February 1959 was copied without correction on the front cover - documents are shown in the middle and right of the header image.

To the left of the header image you can see a witness testimony of Vasiliy Popov, the head of communications at Vizhay timber department, conducted by the local police chief on 6 February 1959. There we have the same date, 3 weeks before the first dead bodies were found. The conspiracy theory thickens - investigator Korotaev was secretly asked to conduct an unofficial investigation before the official one was launched.

To make matters worse (for the common sense) Tempalov’s decision to open a prosecution case dated 26 February is based on the discovery of the frozen bodies of Krivonischenko, Kolmogorova, Dyatlov and others. These bodies were found next day - 27 February 1959. 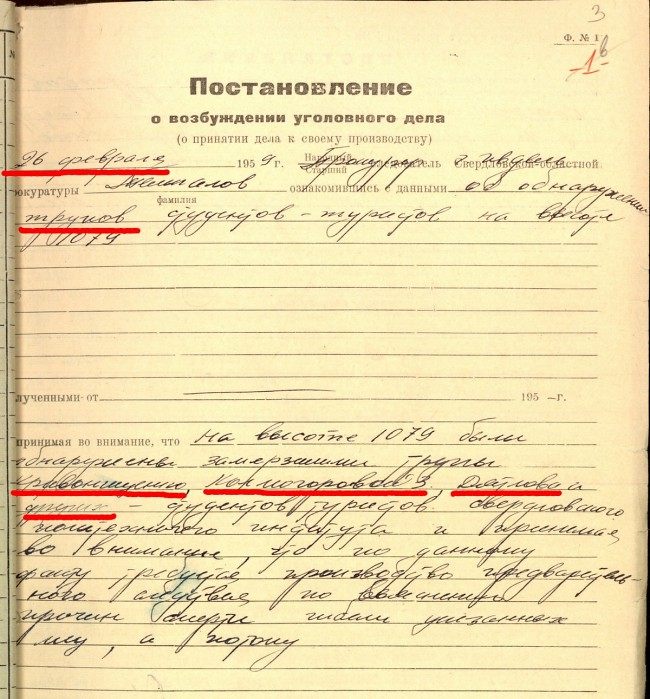 February 26, 1959 Attorney Ivdel Tempalov reviewing data about the discovery of the bodies of students, hikers at Peak 1079

Taking into account that at Peak 1079 the frozen bodies of Krivonischenko, Kolmogorova Z, Dyatlov, and others - students, hikers from Sverdlovsk Polytechnic Institute, and taking into account that this fact requires a preliminary investigation to identify the causes of death of such people,
In accordance with Art. Art. 96 and 110, CPC

To open a case to prosecute
Start criminal prosecution

the demise of the hikers of Sverdlovsk Polytechnic Institute and proceed with an investigation. 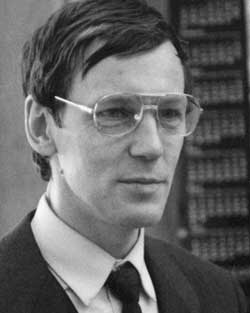 Evgeny Vadimovich Buyanov, writer-publicist, Master of Sports on mountain tourism, author of "Mystery of the Dyatlov group death" (2011) - ambassador of the avalanche theory, wrote to the Prosecutor’s office explaining that the obvious mistake in the date of Vasiliy Popov’s statement - 6 February was indeed 6 March, is carried on the cover of the Case file and it is a source of a lot of nonsense talk about a major cover up, that the officials knew about the accident before the actual discoveries of the bodies.

In his letter Byanov is asking to change: 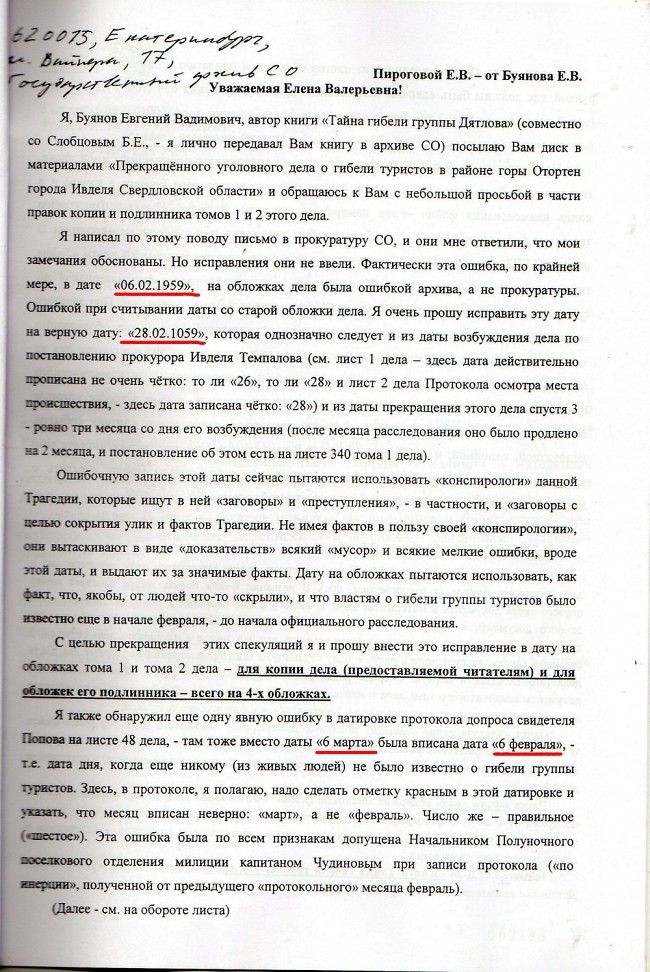 Buyanov's letter to the State Archive of the Sverdlovsk Region (GASO), where the CA is stored

One of Buyanov’s arguments is that in the decision to grant extension to the case the date of opening is clearly typed as 28 February 1959. 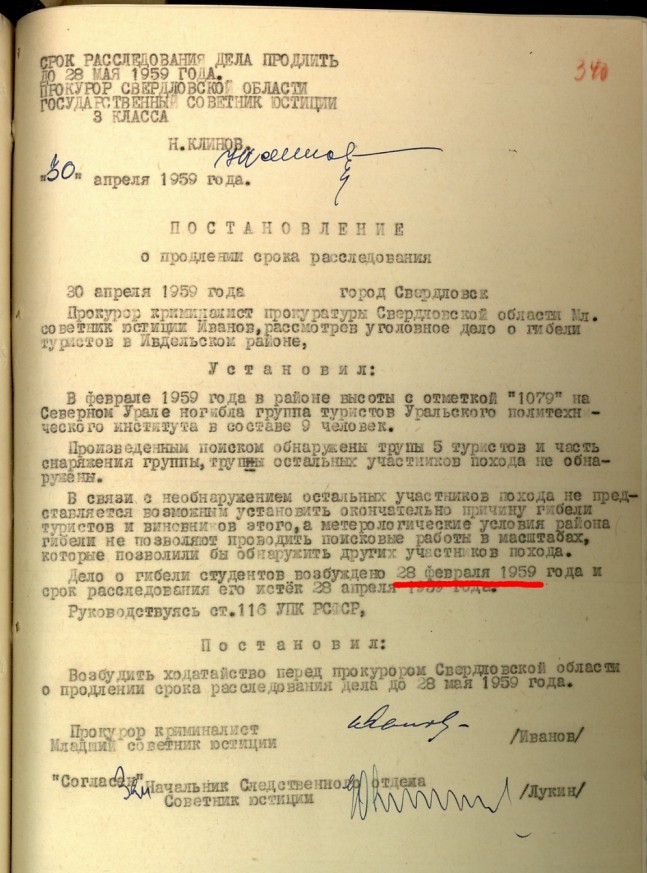 Decision to extend the investigation

The answer from the Prosecutor’s Office is that “his arguments about the date on the cover being wrong are noted and will be taken in consideration in future correspondence on the case”. 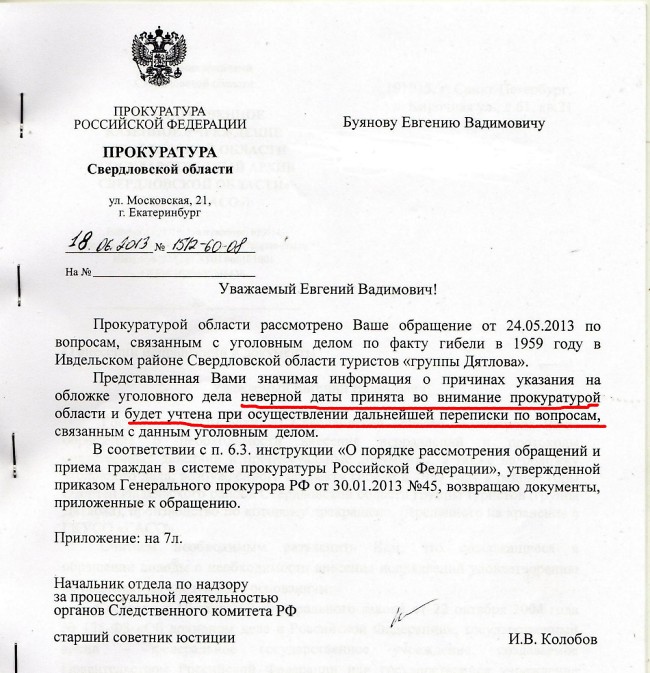 The answer to Buyanov's letter from the prosecutor's office of the Sverdlovsk region, located in Yekaterinburg

Another letter follows from State Archives of the Sverdlovsk Region stating that:
“Any corrections and clarifications in the records of investigative actions, including the change in the date of a document, can be made only on the initiative of law enforcement officers who conducted the investigation in the criminal case or on the instructions of a supervisory authority. Similar requirements apply to making changes to the records on the cover of the criminal case. Employees of the archival service do not have such authority.” 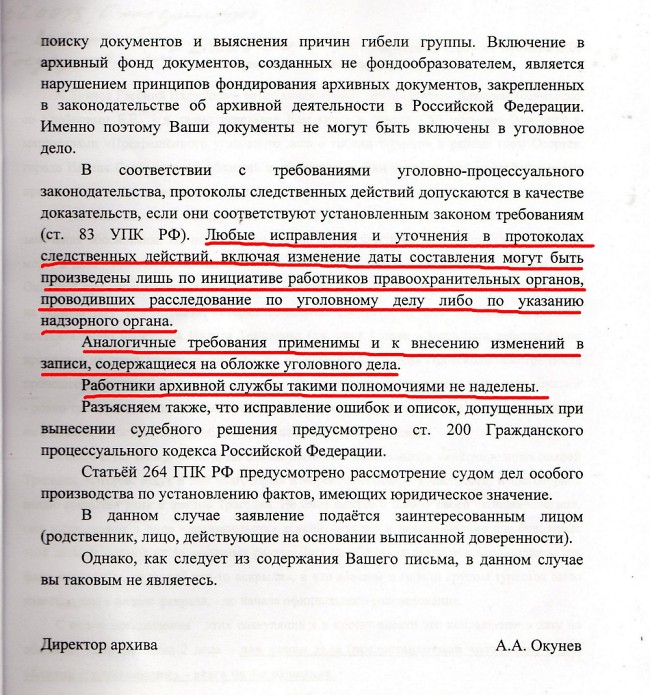 Responce to Buyanov's letter from State Archives of the Sverdlovsk Region

Kolevatov’s eldest sister Rimma Sergeevna Kolevatova is really disappointment with the pace of the investigation. On 26 February Kolevatov's relatives sent a telegram to Nikita Khrushchev signed by one of his four sisters Nina Anisimova.
"Dear Nikita Sergeevich By the scheduled date on February 9, a group of hikers from the Polytechnic Institute of Sverdlovsk did not return from an expedition in the Northern Urals Search began late only after 10 days had passed Regional organizations have not yet taken effective measures We earnestly request your assistance in the urgent search for our children. Every hour counts now" 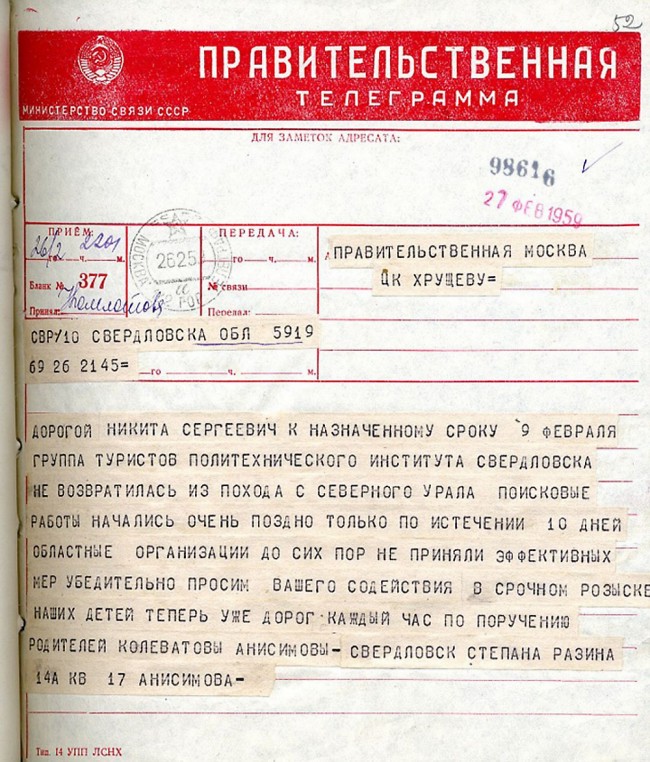 The telegram was shown in Kremlin on February 27. Rimma Kolevatova's in her testimony from April 14 clearly shows her knowledge that a telegram from the hikers sent from Vizhay was expected on February 12 with a notice about their arrival in Sverdlovks. Kolevatov's sister, in her despair, made up and earlier date of the group’s expected return date to make the facts more ominous. This telegram may have escalated the search and rescue operation to the highest circles. Special report dated February 28 addressed to the Minister of Internal Affairs of the USSR signed by the Minister of the Interior of the RSFSR is published below. 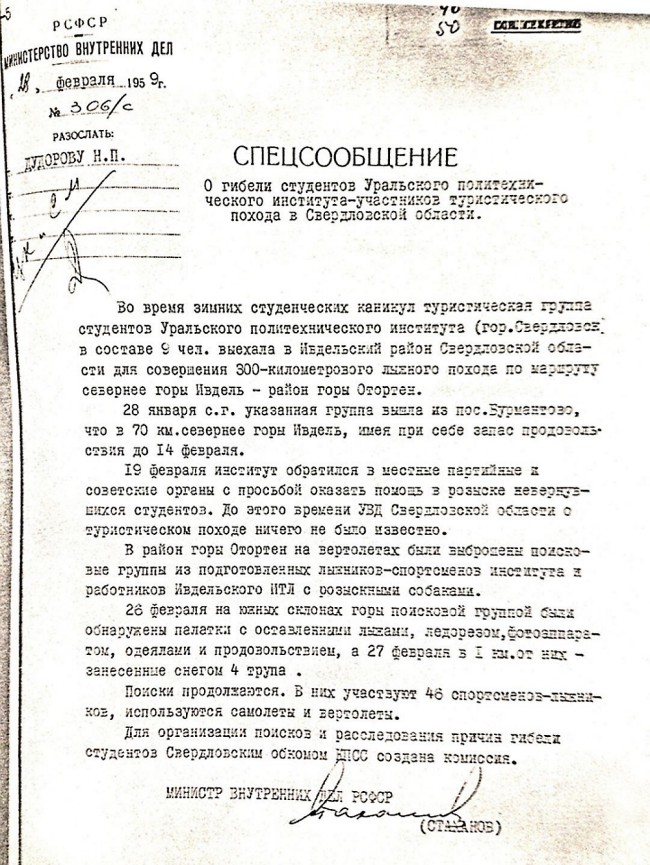 During the winter break a group of students from the Ural Polytechnic Institute (Sverdlovsk), consisting of nine people, left for the Ivdel District of the Sverdlovsk Region to undertake a 300 km ski trip along the route north of Mt Ivdel – in the area of Mt Otorten.

On January 28 the group left from village Burmantovo 70 km north of Mt Ivdel with provisions to last till February 14. On February 19, the Institute appealed to local party and Soviet authorities asking for help in finding the missing students. To that point Department of Internal Affairs of Sverdlovsk Region didn’t know anything about the missing hikers. Search groups including trained skiers-athletes from the Institute and workers from the Ivdel Correctional labor camp with search dogs were dropped by helicopters in the area of Mt Otorten.

On February 26 on the south face of the mountain rescuers found tents with skis, ice axe, cameras, blankets and provisions, and on February 27, 1 km from away - 4 corpses covered with snow. The searches continue. Participants are 46 athletes- skiers, airplanes and helicopters are dispatched to aid in the search.

Sverdlovsk Regional Committee of CPSU established a commission to oversee the organization of the search and investigation of the reasons for the deaths of the students.

Minister of the Interior of the RSFSR 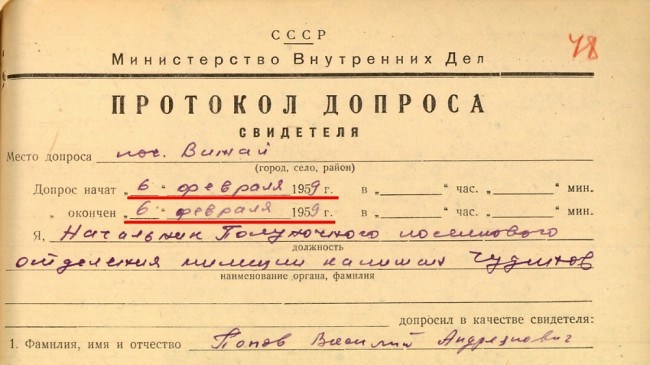 Regarding Popov's testimony dated 6.02 - the main reason for the confusion with the date on the cover of Dyatlov case (dating 6 of February - a week before Dyatlov group was even due back in Vizhay) the Prosecutor of Sverdlovsk Andrey Kuryakov in a press conference on 4 Feb 2019 in Yekaterinburg suggested that it could have come from another unrelated case, because there is no reference to Dyatlov case in the testimony.

This is setting a very bad precedent. This means all the testimonies even if they refer to hikers if they don't directly mention the name of Dyatlov, they might be from a different case.