Communist Party of the Soviet Union

Central Committee of the CPSU

Statements sent: Regional Committee of the CPSU - department of trade and financial administration

On the death of a group of hikers from the sports club of the Ural Polytechnic Institute.

On February 1, 1959, on the slopes of Otorten /Ivdelsk District, Sverdlovsk Region/ a group of hikers, organized by the Sports Club of the Ural Polytechnic Institute, tragically perished. I the group were: I. A. Dyatlov /leader/, L. A. Dubinina, Z. A. Kolmogorova, A. S. Kolevatov, Y. M. Doroshenko, R. V. Slobodin, G. A. Krivonischenko, N. V. Thibeaux-Brignolle, and F. A. Zolotaryov (ed. note - his first name is misspelled).

As a result of the investigation carried out by the Commission of the Regional Committee of the CPSU /Chairman of the Commission Comrade V.A. Pavlov - Deputy Chairman of the Regional Executive Committee/, it was established that the immediate cause of the death of the group was a strong hurricane, which caught with them while approaching Mt Otorten. All members of the group, having left for some reason the tent set up on a slope of height 1079, were scattered by the hurricane, lost their orientation, were unable to return to the tent and died from low temperatures.

According to the conclusion of the commission and experienced hikers-masters of sports, it was stated that pitching the tent on the side of a mountain on a treeless area and frequent hurricane winds was completely wrong, and the abandoning the tent in such weather was reckless.

At the same time, the Bureau of the City Committee of the CPSU, in accordance with the materials provided by the commission, notes that the leaders of the Ural Polytechnic Institute /Comrades Siunov, Zaostrovsky, and Slobodin /, as well as the former city committee on physical education and sports /Comrade Kurochkin/, permitting hiking, made serious shortcomings and mistakes, did not establish personal responsibility for organizing, instructing, equipping and conducting hiking treks and entrusted all this work to the Institute’s sports club.

The management of the sports club of the Ural Polytechnic Institute /The Chairman of the club, Comrade Gordo/ and its hiking sections, made many deviations from the procedure for conducting hiking treks, their planning and control established by the official instructions. The route commission of the club, neglecting the design of the relevant documents for hiking treks, 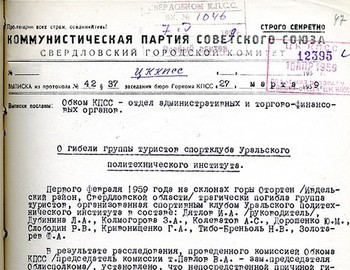