Bulgarian expert on the Dyatlov Pass: The footprints were left by shod feet 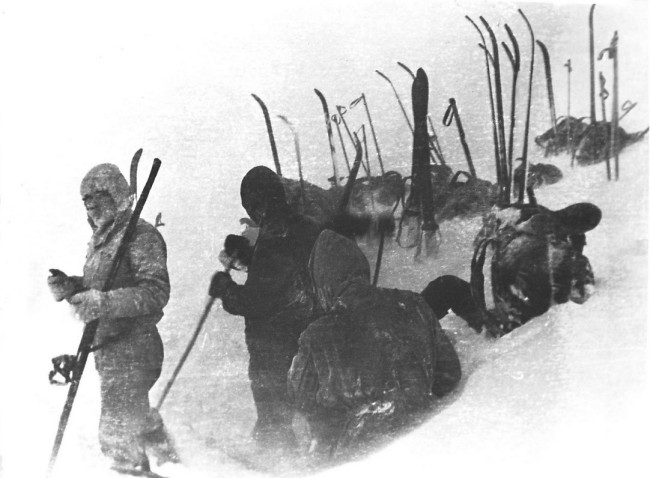 Reminder. In the winter of 1959, nine skiers disappeared in the mountains of the Northern Urals, who went hiking under the guidance of a 5th year student of the Ural Polytechnic Institute Igor Dyatlov. A month later, rescuers found their cut tent. And within a radius of one and a half kilometers from it - five frozen bodies. The bodies of the rest were found only in May. Almost all the hikers were shoeless and half-dressed. Some had fatal injuries. It remains a mystery to this day why the experienced mountaineers ran into the bitter cold and to their death.

Recently, a new book was published about the strange death of the hikers on the Dyatlov Pass called "1079". If anyone does not know, this is the height of Mt Kholat-Chakhl, on the slope of which a tragedy happened. The authors are Russian nuclear physicist Igor Pavlov and Bulgarian researcher Teodora Hadjiyska. We will not disclose the details of the version presented in the book. Let's focus on one curious expert opinion on the footprints of the members of the the Dyatlov group.

There is a generally accepted opinion that 6 hikers left their campsite without barely clad, the seventh had one felt boot on his leg and only two were were shod. This is how the rescuers found the bodies of the dead. And 9 pairs of boots were found in the abandoned tent. In addition, some of the footprints from the tent in the photo look like bare footprints. Hence the conclusion: the Dyatlov group did not have time to put on their shoes, moving away from some danger that threatens them.

An experienced forensic expert, associate professor Lyudmil Georgiev, well-known in Bulgaria, has a different opinion. Footprints were left by shod people. Note that the expert did not know in advance that these traces were related to the death of Igor Dyatlov's group.

Pavlov and Hadjiyska asked the expert the following questions:

1. Were the feet of those who left footprints shod or barefoot?

2. How many people left the footprints?

3. In what direction did the people who left the footprints move? 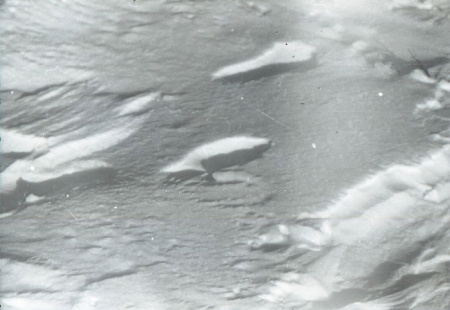 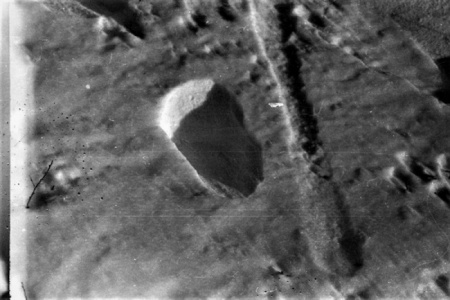 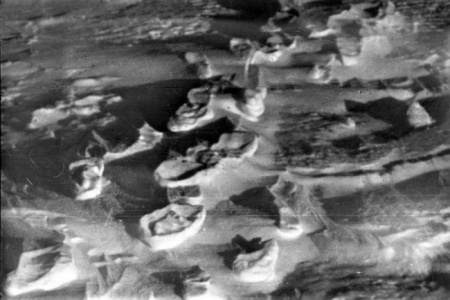 Not certain, but probably

A professional analysis of the three photographs showed the following. But first, the expert points out that the photos are of poor quality. Therefore, it is impossible to give accurate information on them, only with a degree of probability. 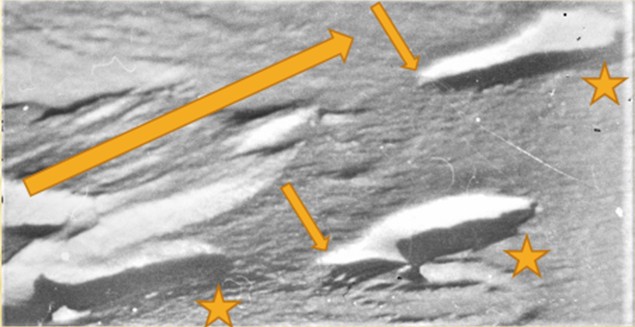 — From their shape it can be assumed that they were not left barefoot, but from shoes;

— In two of the tracks, in the area of the heel, there are dragging (marked with small arrows), indicative of the direction of movement;

— The direction of movement of the person who formed them is indicated with the bold arrow;

— From a photograph presented in such a perspective, it can be assumed that the footprints were left by one person. 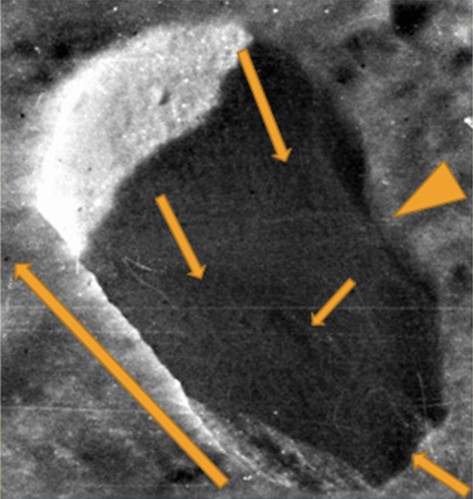 — Probably left by a left winter shoe; on the left along the length of the trace is straight, on the heel - oval, and on the right in its middle part is arcuate - indicated by the triangle;

— Fragments resembling a tread (indicated by three arrows) are observed at the bottom of the footprint. It is not possible to establish definitively whether the trace is formed by only one shoe or has been stepped on more than once;

— The direction of movement is indicated by the extended arrow to the left of the image; in the area from the heel there is a slight drag. 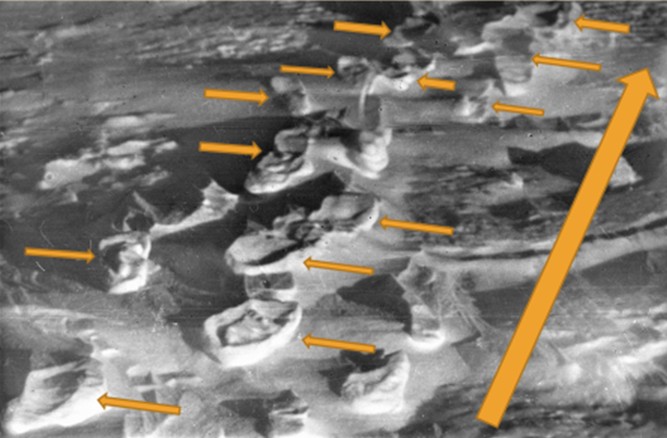 In the photograph, formations resembling steps are indicated by arrows. They are voluminous - three-dimensional (shadows also speak about this).

For comparison, the expert cites an experiment with bare footprints on wet sand. The formation of tracks on wet sand and snow is the same. 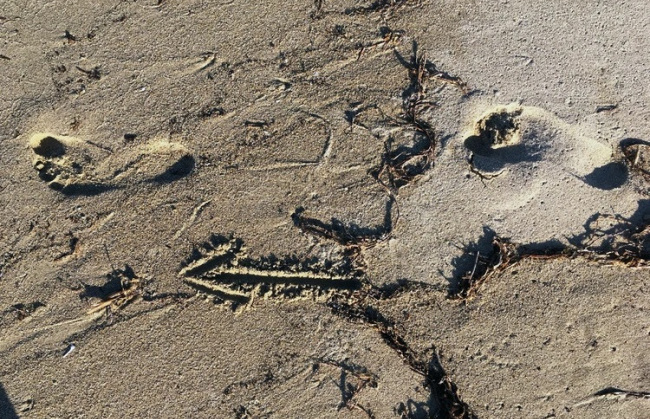 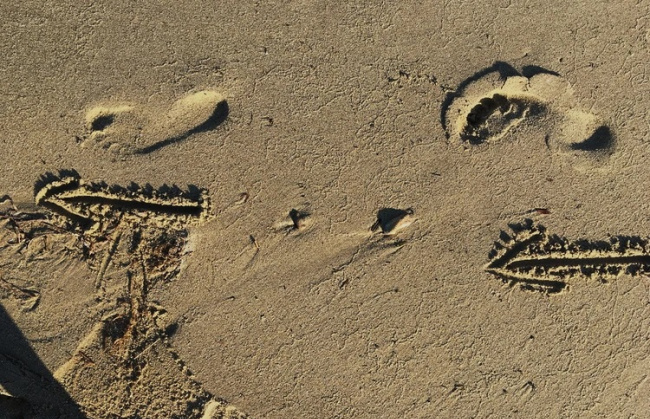 — If this "prominence" of them is not due to a photographic effect made intentionally or obtained in the process of developing the film and the subsequent copying of the photograph, it can be assumed that: the originally formed marks were indented (due to the nature of the mark formation in snow surface); subsequently, the traces have softened (semi-melted with a possible increase in temperatures or exposure to the sun); due to subsequent new low temperatures – the tracks are frozen; the wind has additionally blown away powdery snow located laterally to the frozen tracks.

Regarding the traces, the following can also be assumed:

— In the photo, the formations resembling footprints are about 13, pointed with arrows;

— They are not formed by barefoot, but by shod feet (the shape and width of the footprints is clearly indicative of this);

— They are left by at least two people, overlap is observed in some of the footprints;

— The tracks are formed when walking or moving faster, and not as a result of running (the type of the trail of the tracks is indicative for this);

— The presumed direction of movement is indicated on the photo by a bold arrow;

— The perspective of the photograph in relation to the traces does not allow to objectively and finally determine the direction of movement (whether the movement of people was usual - forward or obviously backward).

The bottom line is that according to the expert, the footprints on all three photos were left by people in shoes. But the Dyatlov group were found without shoes. The head of the search, Evgeniy Maslennikov, left a curious drawing in his observation notebook. Scheme of the slope where the tent stood, and traces of it - in boots and barefoot. Apparently, Evgeniy Polikarpovich was very puzzled by the traces. However, such a combination would confuse anyone. 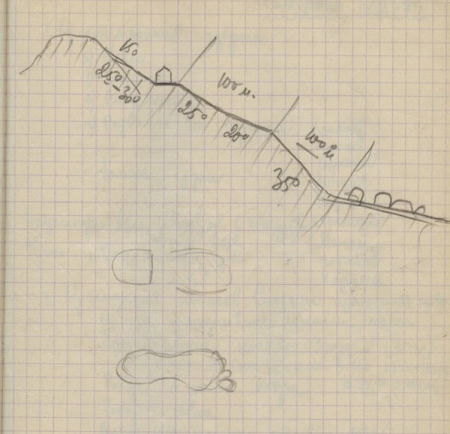 But if we are to trust the Bulgarian expert, it turns out that most of the hikers were taken off by someone - or marauders who discovered the bodies before the rescuers, or ...? However, we will leave readers to look for answers to the questions raised. If you have something to say about this, write to us: vars@kp.ru, konata@kp.ru. 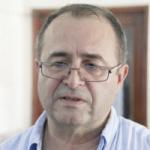 Associate Professor Lyudmil Georgiev is a forensic scientist with 27 years of experience working in internal affairs bodies, in different periods of his practice he was a patrol policeman, an investigator, a forensic scientist, and a police representative. He graduated with honors from the Police High School in Pazardzhik, the "Police" Academies of the Ministry of Internal Affairs and "Journalism and Mass Communications" of Sofia University. He specialized in forensics in Russia (he studied in the period 1985/86 at the "Forensic Expert Faculty" of the Volgograd School of the Ministry of Internal Affairs, currently the Academy of the Ministry of Internal Affairs), as well as in "Operational Work" at NATFIZ. He participated in numerous international projects and seminars in the fields of forensics and investigations with partners from Germany, France, Austria, the Netherlands and the USA. Since February 2011, he has been teaching judicial expertise and forensic expertise at the Faculty of Law of Ruse University. Lyudmil Georgiev is an expert in the Sofia City Court as a criminalist, preparing expertise mainly in the fields of documentary and video technical research.