Radio message sent by the search team:
“2 March – At 18.30 hrs the group of Slobtsov and the Mansi, Kourikov, found Dyatlov’s depot 400 m from the rescue camp. In the storage were nineteen items of food with a total weight of 55 kg. Also found were some medical supplies and Dyatlov’s warm outer boots, plus one pair of spare ski boots, a mandolin, a set of batteries and a lamp, and a mounting set. The storage depot was found 500 meters below the top edge of the forest, in the upper sources of Auspiya river.” 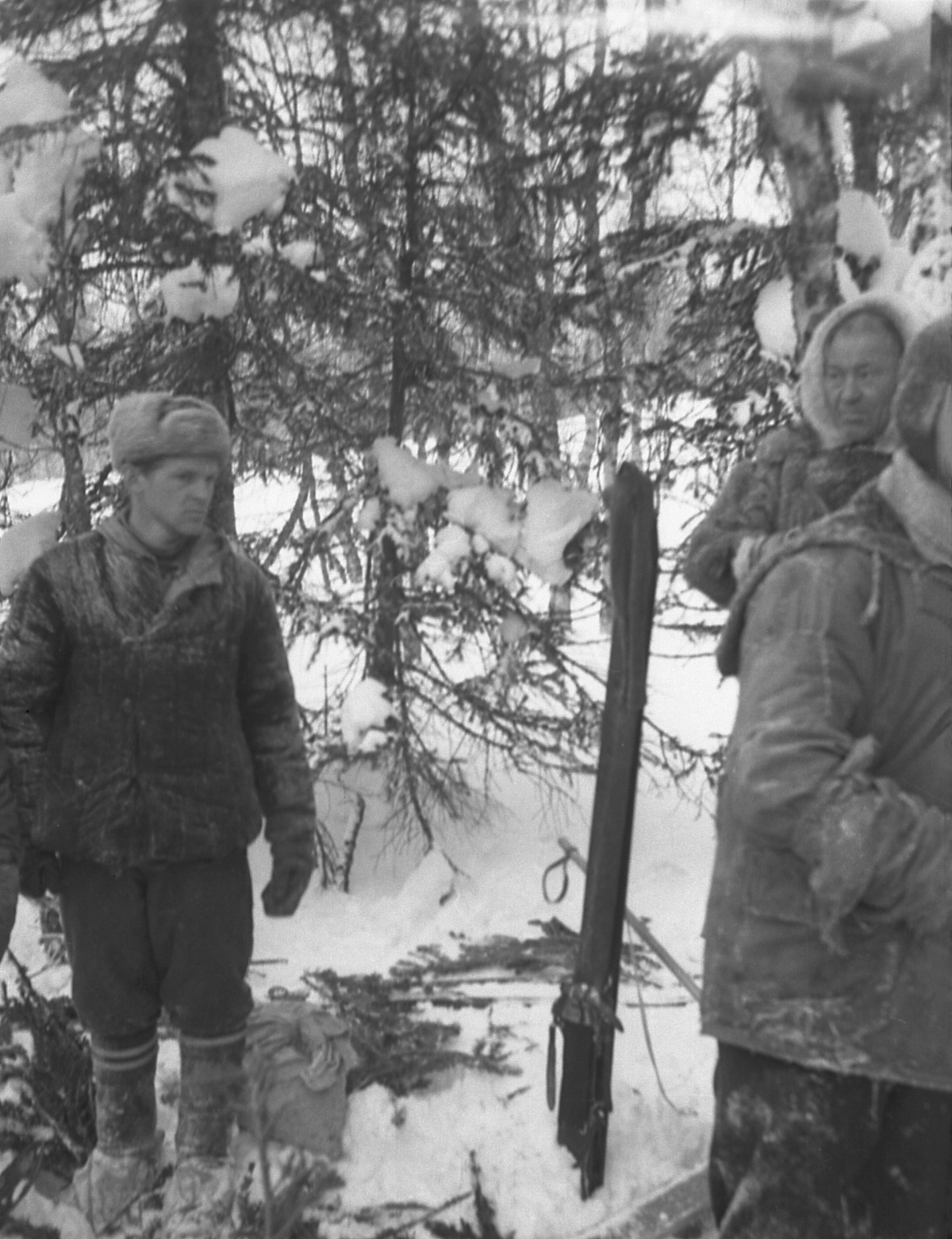 The storage site where Dyatlov group left provisions for their way back and lighten their backpacks for the ascend. In different sources they call the site "labaz". Mansi rise platforms to store their game to pick it up later. 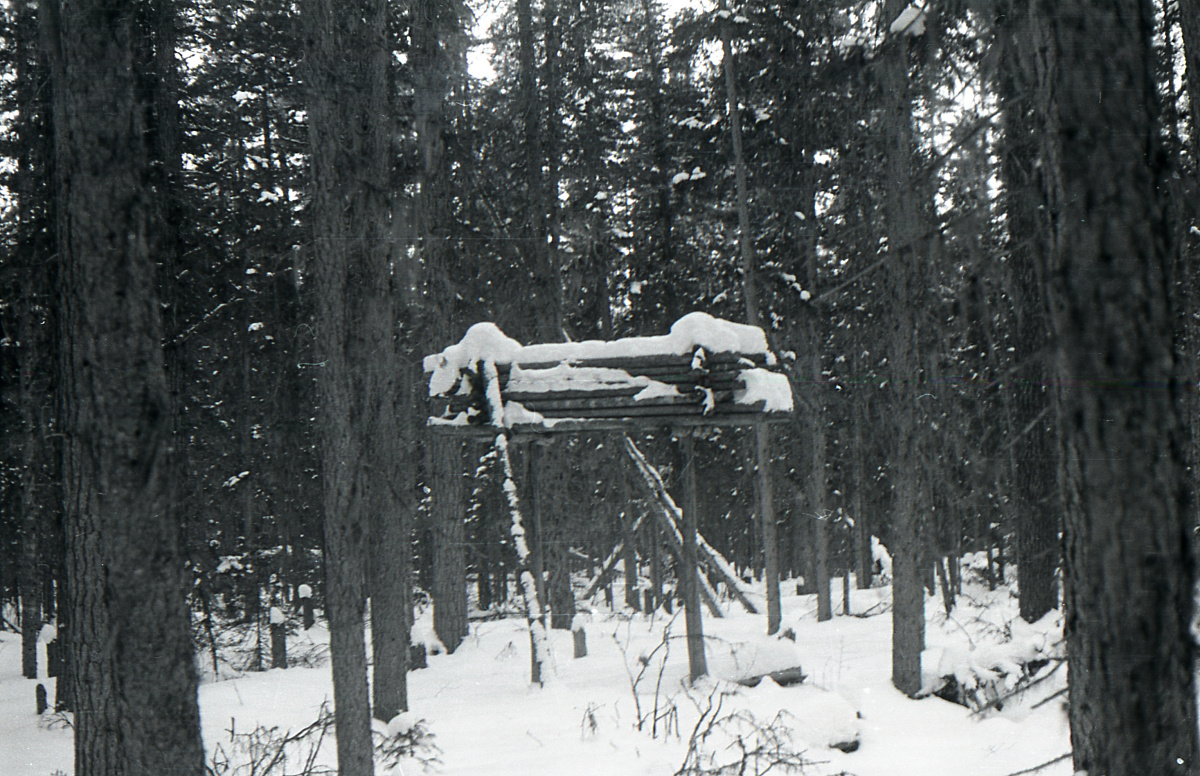 In other sources I have read that the items were left in an abandoned camp site. In last entry of the group diary on January 31 Dyatlov wrote "I can't even start thinking of setting up a storage". Their inventory was found like this marked with ski propped in the snow and a gaiter slipped onto it. Researchers familiar with mountain trek rations claim there are 40 kg missing from the provisions – so, there is something fishy about this labaz.

Relaying on witness testimonies is proven not to be reliable and shouldn't be final. Yudin’s memory isn’t flawless. He has been interviewed many times by different people, and sometimes he makes mistakes. For instance, in one interview he stated he searched for minerals alone at the 2nd Northern, but the diaries show that several students were involved in this. Ski professionals say that extra pairs of skis are essential for such a long route. Traditionally, the last person in the line drags them behind with a rope. It was probably this extra pair that was used to make Kolevatov's sledge mentioned in their satirical propaganda leaflet Evening Otorten. Also Slobtsov said when he first found the tent, that he saw ‘an extra pair of skis’ like this is something common for an experienced trekker in winter conditions. 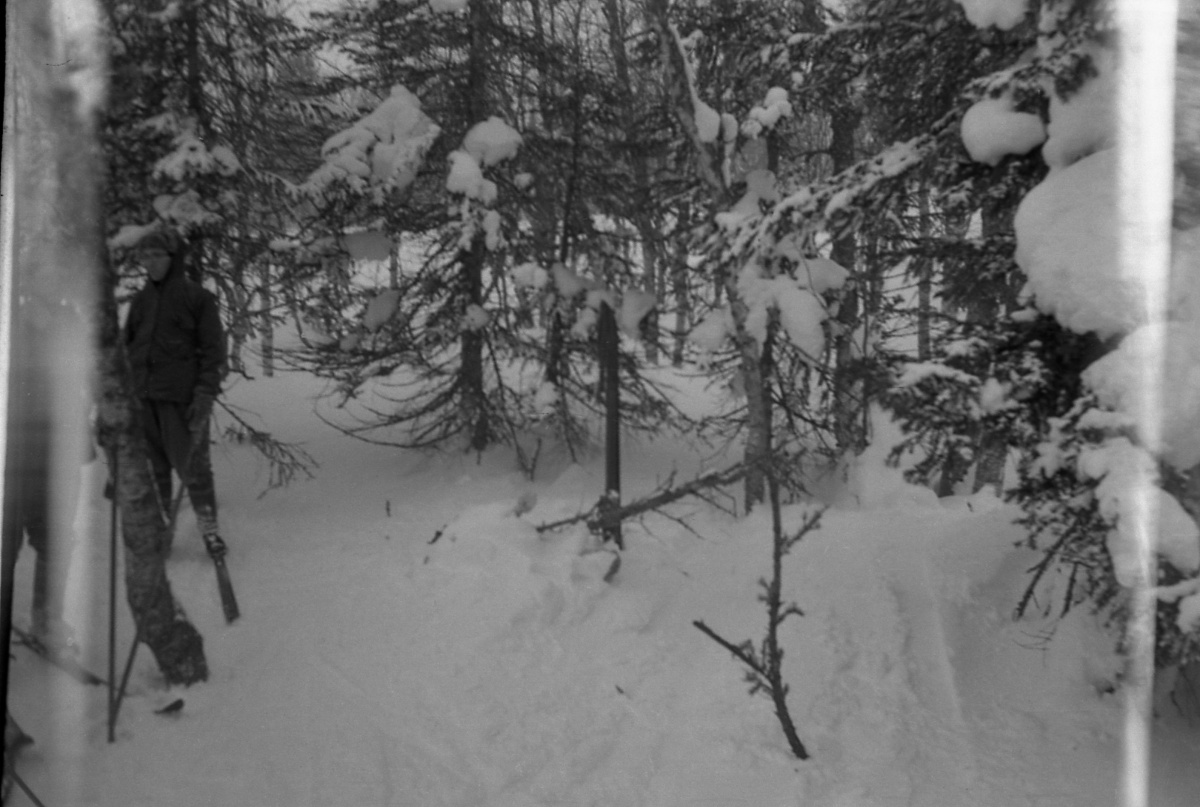 Dyatlov group labaz the way it was found

The group had one ice axe yet two were found 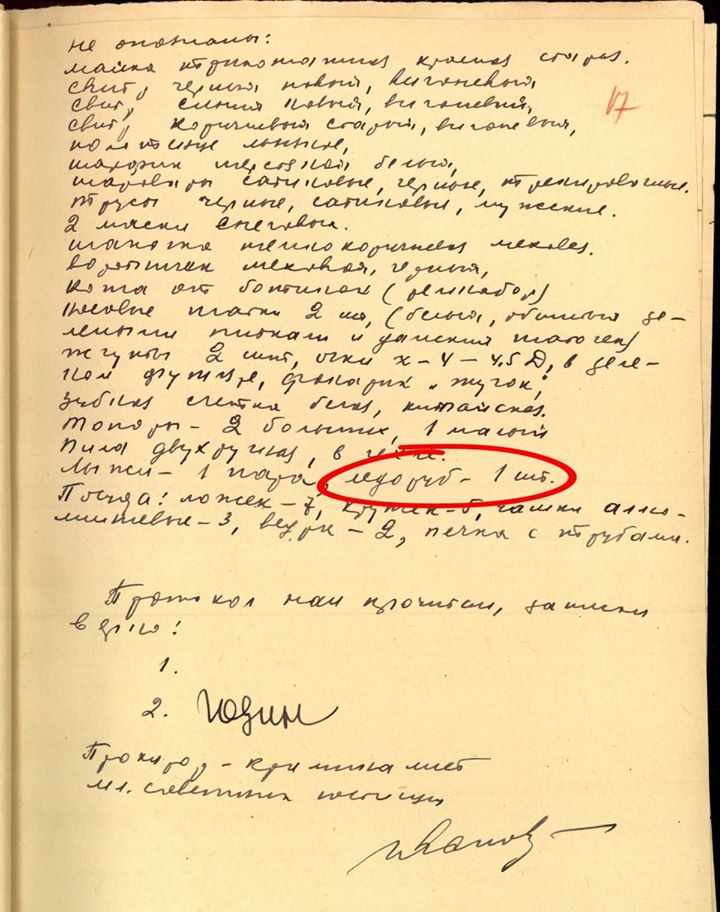 From the inventory of the Dyatlov group tent, circled in red is ice axe - 1 pc

The document above is from the Case files (sheet 17) “Protocol of inspection of things found at the scene of the incident” or where the tent was found. There is a 1 pc of ice axe. Next document in the Case file (sheet 18) dated March 3 "Things brought from the labaz" there is another ice axe. It is not clear whether this ice axe was the same one found by the tent or if there was another one in the labaz. 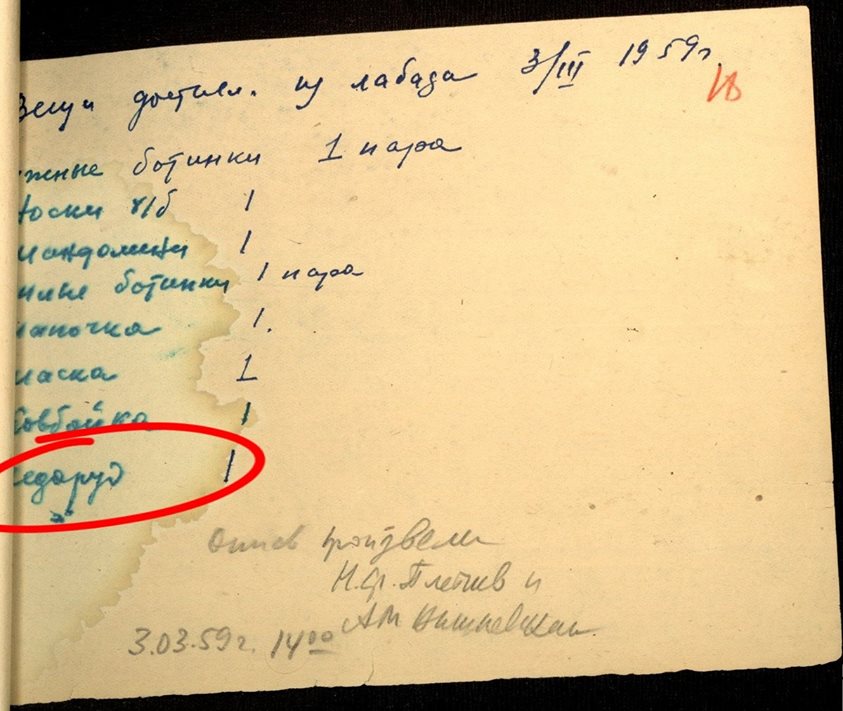 No ice axe was initially reported by those who found the storage (labaz). Or, if there was indeed an ice axe in the storage this means the ice axe found by the tent does not belong to the group.

March 2, 1959 Search party base camp in the upper sources of Auspiya river. Attorney forensic Sverdlovsk region Ivanov prosecution in the presence of the head search party comrade Maslennikov (city of Sverdlovsk, Zavodskaya St, 32) and Slobtsov Boris Efimovich (Sverdlovsk, Lenin St 13-a, apt. 23) in accordance with Art. 78 Code of Criminal Procedure made this Protocol as follows:
on this date in the upper sources of Auspiya river, under the pass of the river Lozva found labaz (storage site) of Dyatlov group.

Labaz is located at a group's camp site well hidden packed with fire wood, covered with planks and spruce debris. In the storage one ski is propped in the snow and a torn gaiter is slipped onto it,

upon excavation of the cache the following products were found:

According to Blinov the insulated boots belonged Dyatlov.
Since the products are not of interest to the investigation, they transferred the head of the search party comrade Maslennikov as an emergency reserve. All containers of product, and mandolin, two pairs of shoes, socks and the mounting set are confiscated.

To this day we don’t know where exactly the labaz is located. All we know is 400 m from the rescue camp and many testimonies from search party members where that camp was, but there is no indication in which direction from the rescue camp was the labaz found. The exact location is important since this is the starting point of Dyatlov group in their last day alive. 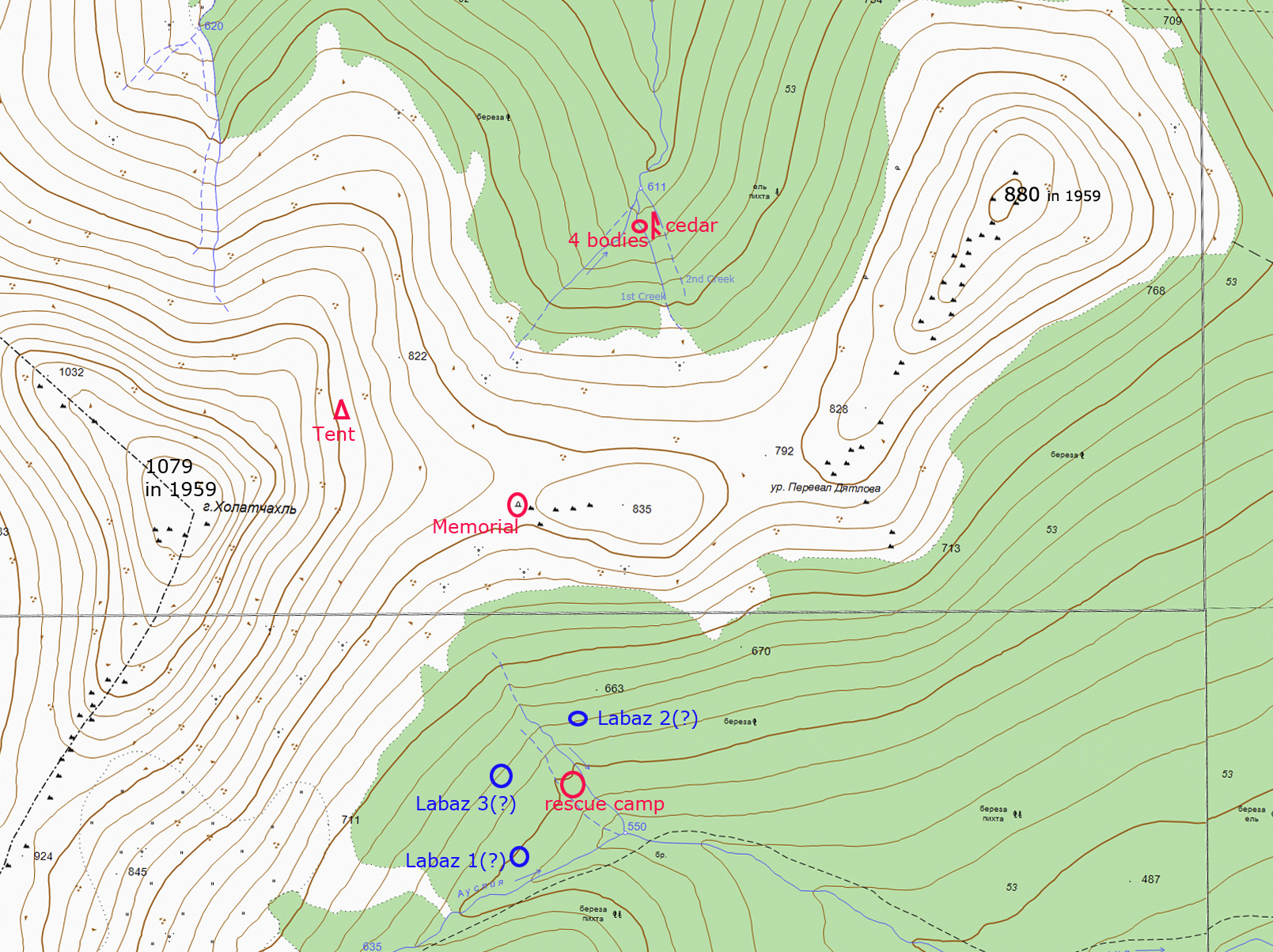 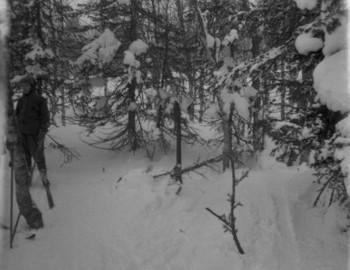 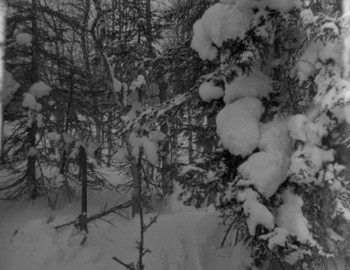 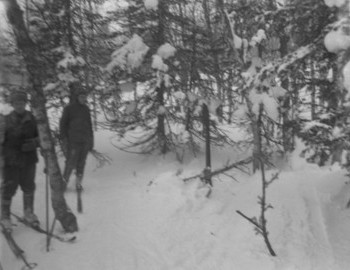 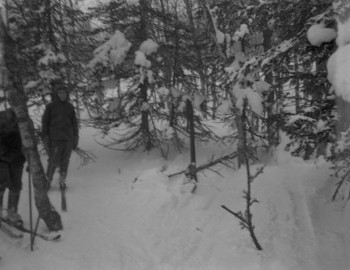 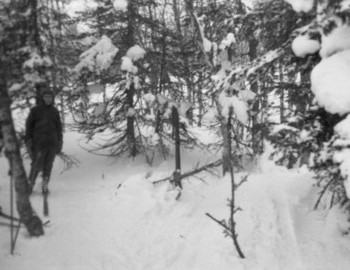 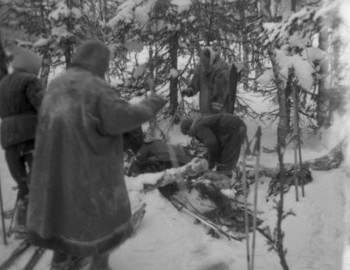 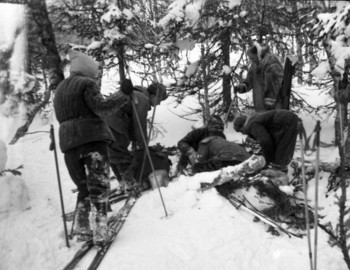 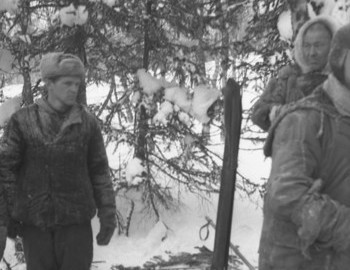