Johan Gaume for Dyatlovpass.com. In our new article in Communications Earth & Environment, we report five main findings relevant to the Dyatlov Pass incident:

an expedition organized late January 2022 revealed the presence of slab avalanches in an eastern slope, less than 3km away from the Dyatlov group tent;

Dyatlovpass.com follow-up questions. Invisible avalanche? How do you answer these questions then:

Gaume: The avalanche is visible, audible and can break your ribs if it hits you when you are lying down. The release area of a small slab avalanche is quickly covered by the new snow and becomes difficult to detect. This is what Oleg and Dmitriy observed two months ago. 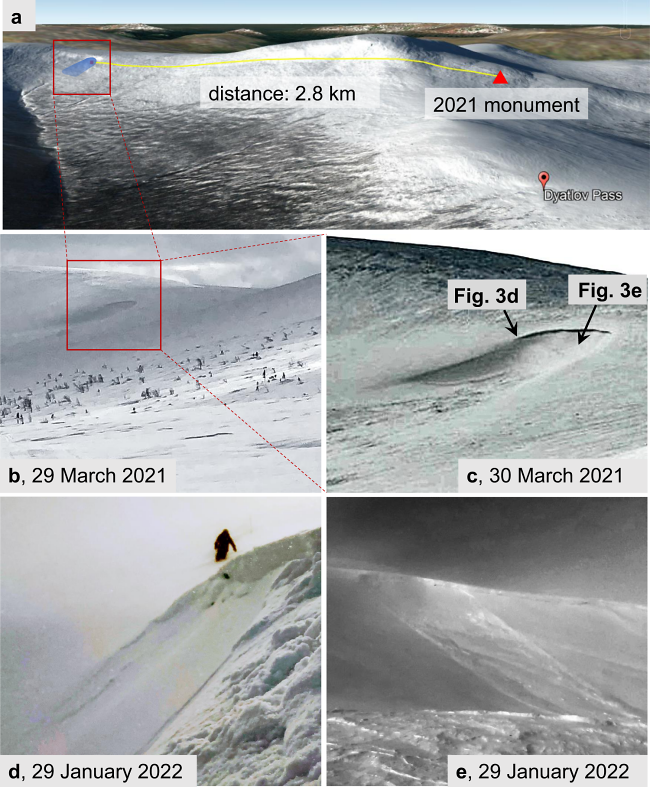 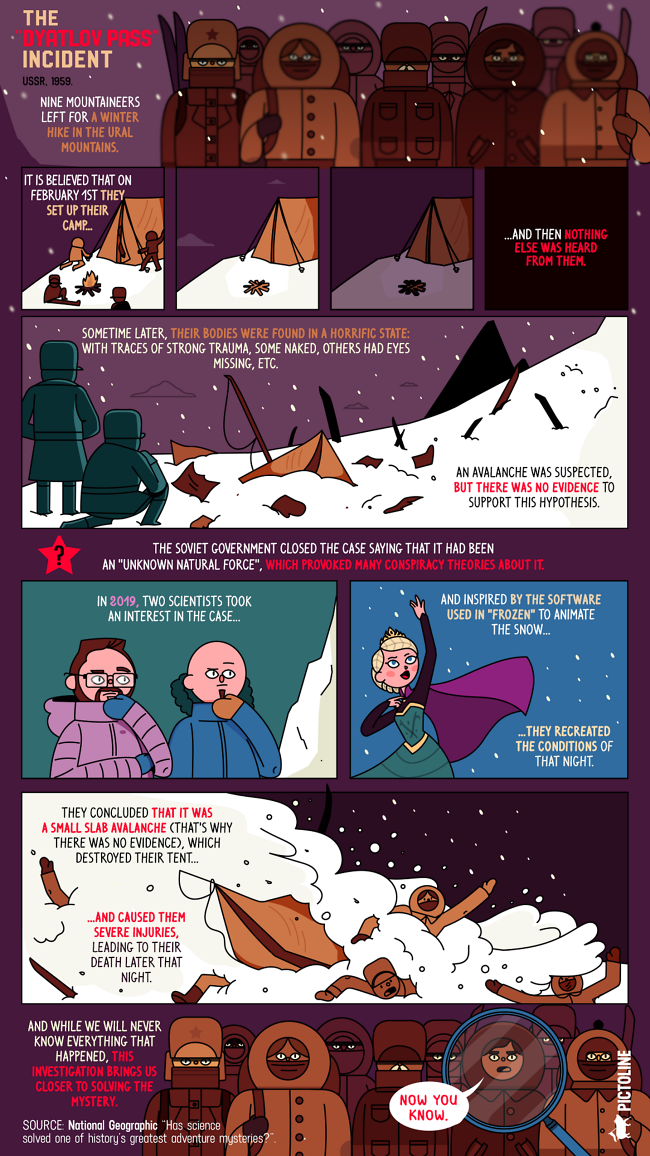 The Swiss "avalanche" team Alexander Puzrin and Johan Gaume have a second paper in Nature.com Post-publication careers: follow-up expeditions reveal avalanches at Dyatlov Pass publishing data from expeditions to the Dyatlov Pass documenting avalanches on the other side of the pass, not on the side where the tent was, and 3D model showing plenitude of red spots where the terrain is close to 30° and they are high fiving since they used in their calculations 28° if I am correct, fact check me on this. Basically the scientific paper proves that a freak avalanche can happen on the Dyatlov Pass. There still need to be certain parameters present: combination of irregular topography, a cut made in the slope to install the tent and the subsequent deposition of snow induced by strong katabatic winds.

We are now not arguing if an avalanche can happen, Puzrin and Gaume convinced us that it could with their first publication Mechanisms of slab avalanche release and impact in the Dyatlov Pass incident in 1959 and this one only confirms it.

But the avalanche theory doesn't answer any of the questions that arise from the case files. It was the first theory that the investigation in 1959 looked into, and it was discarded not because there couldn't have been an avalanche, but because there was none.

The evidence in the case files shows no avalanche, and this new publication can't change that:

What we should take from this paper is that if there was an avalanche in 1959, it should have been readily apparent to the first responders. Now you see what a slab avalanche looks like and know that there wasn't one on the photos taken in 1959.

I've attached the 3 most pertinent photos from the search, colourised and restored.
While some claim 3 week's worth of windblown snow would fill the void left by a slab slip breaking off, I'm not convinced it would do so completely or create such a firm surface that men could stand on it and not realize what had happened there.
And the only visible evidence of any potential avalanche was immediately below the tent site, where some 2 tones of snow (possible to calculate the volumetric weight online for snow crust) had been thrown when a tent trench was dug out, the large clumps which would survive the wind. (And some on the tent, along with a torch.) 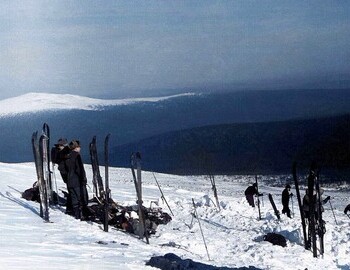 1. Men standing on the area a slab slip would have occurred 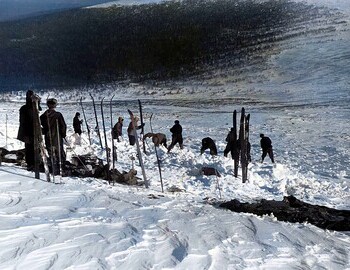 2. Loose 'avalanche' snow below tent is from the trench. 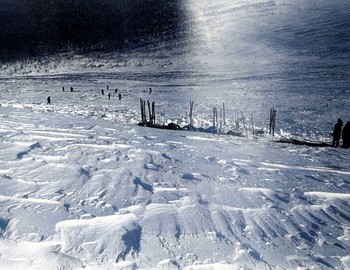 3. Virgin snow crust above tent
Borzenkov's analysis of Puzrin-Gaume avalanche theory: https://dyatlovpass.com/borzenkov
The article coming this week has new information because even I agreed that there could be freak avalanches on Dyatlov Pass. But Dr. Vladimir Borzenkov, the scientist I am publishing, says otherwise. Borzenkov has been to the pass many times and examined this particular event - avalanche, in the whole area. I reached out for an opinion. He gave me 30 pages with illustrations. All that Gaume and Puzrin didn't do (go to the pass) Borzenkov has been doing in the winter of 2012, 2013, 2014, 2015, and 2019. Dr. Vladimir Borzenkov is a graduate from the Moscow State University of Aeronautics (formerly Moscow Aviation Institute) with degrees in aviation engineering, another in applied mathematics and a PhD in safety and rescue equipment engineering for aviation and space systems. ​In ​1982​ Borzenkov was a member of the scientific team behind the first Soviet expedition to Everest. He designed special high altitude suits and an oxygen mask mechanism which was later used in the Soviet space program.
There are two aspects of the Swiss theory.
1. The first is could there be an avalanche where the Dyatlov tent was found. I am not equipped to disprove their science but I am working with a Russian on a response with his own take on the avalanches in the area. He is proving this avalanche is not applicable to the place where the tent was found. Conditions are very different. And not to take this in account one must have blindfolds.
2. The second aspect of how they explain the whole incident doesn't have any weight or anything new to discuss. This scenario is disregarded even by the Russian officials. There are worse theories than theirs but they don't make all the headlines. This is what is out of balance.
Gaume downplays the injuries.
Some links from the Russian press on the same subject:

It swept up in 20 minutes. Found the first evidence of the death of the Dyatlov group under an avalanche
Замело за 20 минут. Найдено первое доказательство гибели группы Дятлова под лавиной
https://www.gazeta.ru/science/2022/03/25/14665783.shtml

None of the searchers who saw the scene testified that it was an avalanche.
It is clear that it was not an avalanche.
It still doesn't explain how they got a mile away undressed and with severe injuries.
"You do things, or things happen to you, that cannot necessarily be explained in a normal situation,” - How convenient to say when you can't find the answers, you don't know why the bodies had that much trauma. This cannot be the answer.
If it was an avalanche, wouldn’t the skis be buried in the snow and not in pace where they left them.
From this perspective its clearly not a possible sight or chance of an avalanche here.
New article in NY Times is referencing this page!
https://www.nytimes.com/2022/04/01/world/europe/dyatlov-pass-avalanche-russia.html
Avalanche or no avalanche, no one in their right mind would pitch a tent on this spot. besides the fact that this tent would never withstand the winds on the ridge. This is staged.
Add comment
Related articles