First of all, excuse us for not responding to your letter in time. We are already old people, often sick, so the response was delayed. We do not know how to help you and the relatives of the victims, after a tragedy that occurred 45 years ago.

Why did not you raise this issue in time? After all, many articles were written about this tragedy in the local newspaper "Severnaya Zvezda" (Nortern Star - ed. note), "Lesnoy Industrii" (Forrest Industry - ed. note), and even in "Komsomolskoy Pravde" (Komsomol Truth - ed. note), "Uralskom Rabochem" (Ural Worker - ed. note). You are now asking.

Why did not they publish the results of the investigation into the criminal case, which I think was instituted. Why did the government not give UPI the right to a collective funeral. If there were any relatives, they apparently have raised this question. Because they were afraid of the KGB. The whole point is that it was necessary to admit the guilt of the military department (NII) of the nightly tests of vacuum weapons or psychotropic action conducted in those areas of the Ural ridge. If they recognized and publish the truth, then it was necessary to pay relatives a large compensation for the loss of life. In Ivdel, we lived for more than 40 years, talked with many elderly people, taiga hunters, and even walked a lot in the taiga even to the foot of the Ural ridge.

There were no mysterious tragedies there, and there were no Mountain of the dead. All this is fiction of the yellow press journalists. There were [helicopter accidents, but this was for technical] (text missing from the scanned document due to overlapping of the pages - ed. note) reasons. Media workers, mostly journalists have built up a lot of fictions and fables on this case. Even got to the Internet. I do not know what you will get after such a long period of time, but I will briefly answer your questions that I know of, since we did not care about trifles.

Given that in the area of ​​the tent in the foothills of the Ural range in February had harsh weather, snowstorm, frost - 25 degrees, 5 victims were first found, and 4 more were people in March or even in April. The snow in those places reached 4-5 m deep.

What did the bodies look like we can not answer. This is apparently said in the inspection report with which we are not acquainted with.

From talking with acquaintances of the searchers, the bodies were lightly dressed even without shoes.

What can be repeated from rumors and theories spread among citizens of Ivdel. Main scenario is that their demise was due to testing vacuum rocket or weapon of psychotropic action. 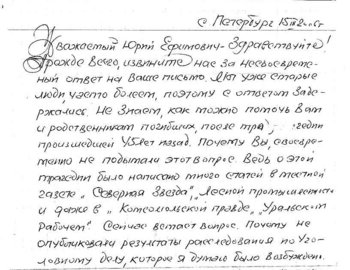 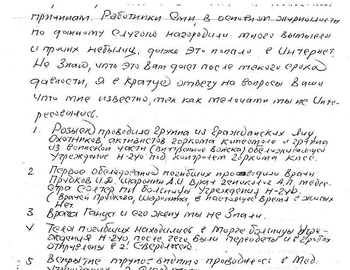