The U.S. Southwest, land of rockets, atom bombs and flying saucers, had another sensation last week: green fireballs streaking across the sky, behaving like nothing ever seen by earthlings before. In 13 days, eight brilliant objects dazzled Southwesterners. According to Dr. Lincoln LaPaz, head of the Institute of Meteoritics at the University of New Mexico, a fall of nine bright meteorites in a year over a comparable area would be considered exceptional. "I just don't know what to make of it," said Dr. LaPaz. "I am almost inclined to ask those [atom bomb] fellows out in Nevada what they are doing."

Dr. LaPaz pointed out that meteors big enough to penetrate the lower atmosphere do not occur in showers. The so-called meteor showers are caused by very small particles that burn out quickly far above the earth. The green color is unusual, too. Meteorites generally roar like jet planes as they approach the earth, but most observers insisted that these odd objects were completely silent. Though some of them seemed to hit the surface with a flash, brilliant even in daylight, search parties so far have found no remains of the mysterious fireballs.

But the Southwest was already abuzz with rumors. The fireballs were being pinned on White Sands (rocket) Proving Ground in southern New Mexico, as well as on the Nevada bomb testers. So far, no one had yet suggested another invasion of the famous flying saucers with their bright little crewmen from Venus or Mars. But people were beginning to report "things in the sky" as far away as New Jersey and New York. 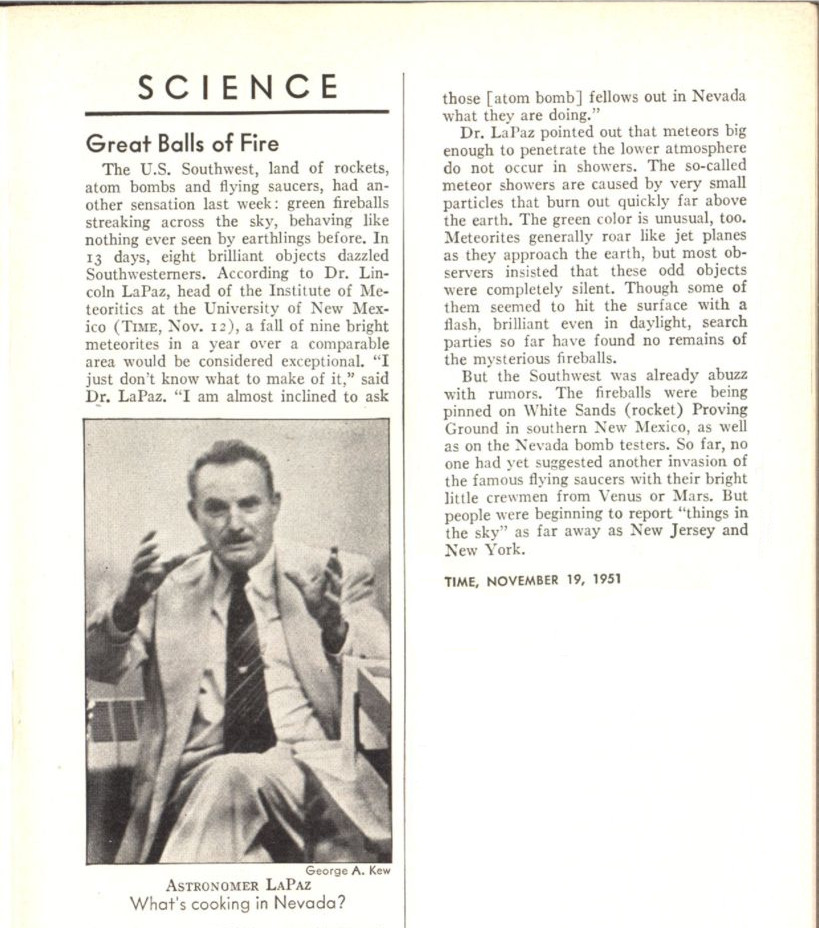 Mystery of the fireballs by S. Bogomolov

Mystery of the fireballs by L. Ivanov