March 16, 1959 Prosecutor of the Prosecutor's Office of the city of Ivdel, Sverdlovsk region, Jr Counselor of Justice Tempalov interrogated in the office as a witness, in compliance with Article 162-168 of the Code of Criminal Procedure of the RSFSR

The witness testified: Answering the questions at hand. In mid-February 1959, I don't remember the date exactly, I came to the chairman of the council in the village of Burmantovo to ask for old newspapers. The name of the chairman of the council is Mokrushin. There we talked with him that the deer were sick with "kopytka" (necrobacteriosis - ed. note) and many deer died and wolves appeared and ate the dead deer. In addition, we had a conversation about my father Bahtiyarov that when he was still alive, he told me that long time ago a man had been blown off off a mountain. That it is dangerous to go to this mountain and warned us not to go there. I don't remember the name of that mountain. My father didn't tell me who was the man that got blown away. My father died 15 years ago. The mountain about which my father spoke is 40-30 km from our yurts in the upper reaches of the Vizhay river.

Mansi don't have a Prayer Mountain nowadays, I don't pray and I do not know of a Prayer Mountain. I don't believe it exists. Since the Mansi do not go to pray now, the elders pray at home, and the young ones do not pray at all. About the missing hikers I found out only when the helicopter flew in our

yurts. It was at the end of February 1959. People said that they were looking for hikers from a helicopter. I don't know how did the hikers go missing and where. When the helicopter flew in, I and my brothers were looking for the deer, and there were only women in the yurts. We looked for the deer for a day. We live in the upper reaches of Vizhay river. We have 4 yurts. Hikers passed more than once through our yurts in January and February 1959, I don't remember the exact dates. The last time group of 7 hikers spent the night with us. They asked me to take them to the Urals, but I couldn't. I had to look for the deer and they went skiing. The hikers ate their food, they had no meat and I didn't give them any. I myself am ill with tuberculosis and have not been able to hunt for 3 years. My brother Nikolay gives me food. I have never been in the upper reaches of Lozva river.
It has been read to me, it is written correctly.

Prosecutor of the city of Ivdel 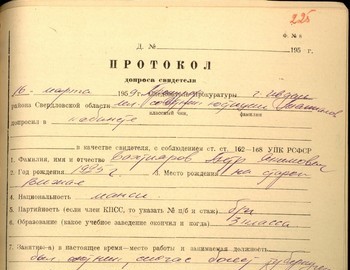 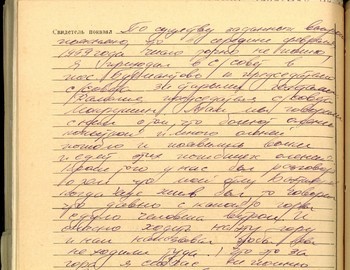 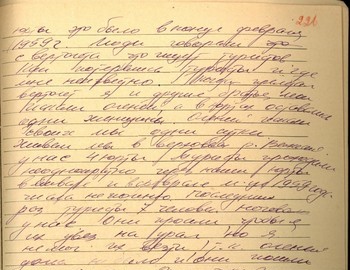