17 III To Tempalov from K. Piguzova
16. III.59
To the Chief of the Ivdel Police Station 17. II. 59, 6 h. 50 m. local time in the sky appeared not unnatural phenomenon. Moving star with a tail. The tail looked like dense cirrus clouds. Then the star was freed from the tail, became brighter than the stars and flew away. It gradually began to swell, forming a large ball, enveloped in a haze. Then inside this ball the star caught fire, from which first a crescent was formed, then a small ball formed, not so bright. The big ball gradually

began to fade, became like a blurry spot. At 7 h. 05 m. it disappeared altogether. A star moved from the south to the northeast. 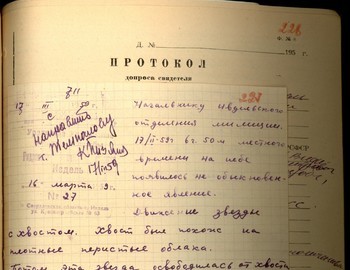 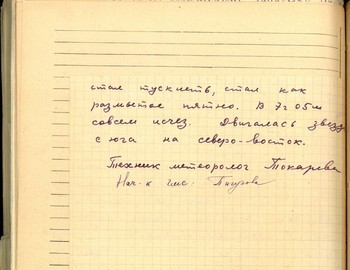