On April 2, 1959, the prosecutor of the city of Ivdel, Sverdlovsk Region, Jr. Counselor of Justice Tempalov interrogated in the Prosecutor's Office of the city of Ivdel as a witness, in compliance with Article 162-168 of the Code of Criminal Procedure of the RSFSR

The witness testified: Answering the questions at hand. In early February 1959, we, i.e. I, Andrey Anyamov, and another Andrey Anyamov, went hunting. We hunted for 9 days in the forest and during that time we saw tracks of narrow skis, which were covered with 15 cm of snow, less in the forest. We thought that some kind of expedition went to the mountains. We saw the tracks along the Auspiya river on the 10th of February 1959. When we came home we said that we saw tracks of skiers. The hikers themselves we did not see or hear. During the hunt, there was good weather, but there was bad as well, some days it was windy and cold. On 23-24.02-59 we went together with the Russians to look for hikers. We found 4 frozen hikers. I don't have any idea what caused it and how did it happened. We found the tent on the mountain, with all the belongings of the hikers. I participated in the search of the hikers for 8 days. As far as I know among us the Mansi, there is no such case when anyone died in the Urals mountains. I am not aware if this has happened before. There are no other people

in these areas. There are no wild tribes in our region. And Mansi did not meet anyone. If they had we would have known. We learned that hikers were missing after the 20th of February 1959. I can not add anything else. Recorded correctly, I read it. 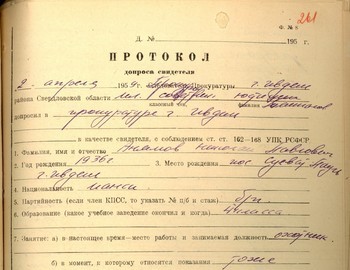 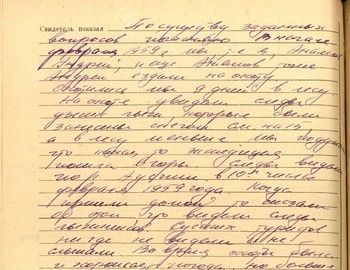 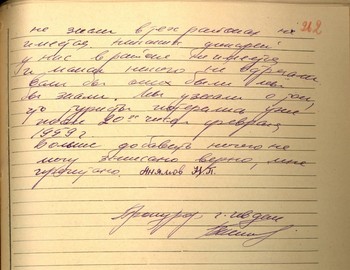