On 13 April 1959 the prosecutor criminologist of Sverdlovsk region Jr Counselor of Justice Romanov interrogated in prosecutor's office as a witness, with the observance of art. 162-168 Code of Criminal Procedure of the RSFSR

Witness testified: According to the instructions of the Committee for Physical Culture and Sports under the Council of Ministers of the USSR, the rights to plan a route is given to any organization and institution and voluntary sports societies, which took place and a category III route was prepared by the UPI section of tourism. Dyatlov group in approximately the same composition made hikes of the highest category of difficulty, and earlier, comrade Dyatlov trekked in this area in 1957, but not along the same route. The terms of the route to the group were known, and the route was approved by a route committee consisting of Korolyov V., Maslennikov E.P. and comrade Novikova, the group also had a map of this area, equipment and food for the entire duration of the journey.

Peo All participants met these requirements. Comrade Dyatlov has category II sports category in tourism and a number of other comrades have ranks in tourism so the group was very strong. The group was prepared by the UPI Institute and financed by the trade union of the UPI, which was supposed to check its equipment before going on am expedition.

The deadline was set for the group to return on February 12, when they should

send a telegram from Vizhay on their return, the group could not send news from anywhere else due to lack of settlements on the route and we could only know about their well-being 12 days after their departure. The group didn't have any radio communication because short-wave radio transmitters are not allowed to be used for this purpose and are not provided for by any instructions. On February 16 comrade Blinov telephoned the Committee and asked whether there were any news of the group and immediately ordered a phone call to Vizhay and talked with the logging worker Hakimov, who said that they gave ride to Dyatlov group to the North mine on December 27, and the the hikers said that they will return to Vizhay not earlier than February 15 and said that the group had not returned. After that, a search group from the UPI was immediately sent, we were informed by comrade Zhuravlyov in the regional committee of the CPSU about the missing group, we sent a telegram to Vizhay, but didn't get a reply, because they talked on the phone, as it became known that the group did not return. UPI trade union committee established headquarters for the search for the group, which was engaged in subsequent work on all search operations.

All the requirements provided by the instructions for approval of routes were met, control of the preparation of equipment for the campaign should be carried out by the sports club UPI, as they approved the group for the expedition and it was funded, as well as provided with all the necessary food supplies and footwear. I personally wrote this. Ufimtsev (signature)

Question: Who specifically from the city committee for physical culture and sports had to watch the movement along the route of the Dyatlov group?

Answer: The movement of Dyatlov group was directly under the instruction of the UPI sports club, but at the same time, the city committee should monitor the movement of hikers groups according to the telegrams, specifically this is entrusted to me. Comrade Dyatlov's search was started within 24 hours after receiving a report that the group did not return to the planned point.

According to the route this group of hikers was supposed to return to the village on 12/II-59. But the worker of the logging camp, comrade Hakimov, told us on the phone that the hikers at the time of their departure moved the return date to 15/II-59. I can not say why didn't the search of the missing group start on February 12. This is to blame on both the UPI sports club, and the committee on physical culture and sports.

Question: What violations of the instructions were made while preparing, equipping and sending this group along the route?

Answer: I believe that no violations of the instruction or omissions were allowed during the preparation, equipment and dispatch of this group.

The record of my words is written correctly, I read it. Ufimtsev (signature) 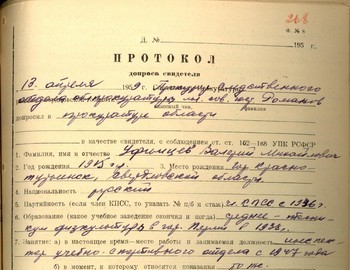 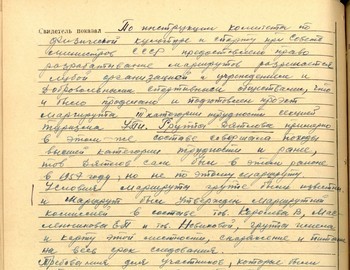 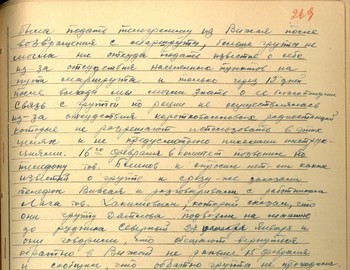 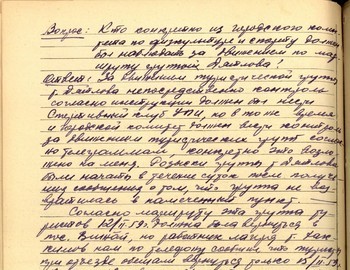