Protocol of additional questioning of the witness

On 15 April 1959 Sverdlovsk City Investigator of the Prosecutor's Office of the Sverdlovsk Region Jr. Counselor of Justice Romanov further questioned as a witness in compliance with Article 102-108 of the Criminal Procedure Code of the RSFSR Maslennikov Evgeniy Polikarpovich.
(The rest of the information is available in case files volume 1)

My testimony on the case:
My answers to the additional questions are the following:

Answer: To obtain permission for the hike, Dyatlov presented all the necessary principal documents - about the hiking experience of each participant, which gives grounds for participating in the itinerary; about the exact calculation of the movement of the group along the 300 km route, calculated for 16 days, as provided by the club's instruction; about personal and group equipment, about financing and material support of the group (estimate), detailed maps of the hike area, etc.
According to all the data, the group had every reason to go on a route elaborated in detail for mountains Otorten and Oyko-Chakur. The leader and some of the participants ahd experience and have been in expeditions Northern Urals (in the specified area), all the participants of the group had been on ski routes of second category, so this

precondition was fulfilled.
The reasons for refusing the group from any fundamental considerations are mine. as a member of the route commission, was not. The specified area is quite acceptable for treks of II and III category and within 2-3 last years Sverdlovsk citizens already traveled on it.

According to the regulations, the route of third category must pass at least 8 days (out of 16) in a sparsely populated area, where the group can count only on its own equipment, strength and skills. In Dyatlov group route this extended to  approximately 12 days: there was not a single settlement. Before the group started off, it was agreed that in the event of a forced setback of the expedition for any reason (bad weather, accident, emergency, etc.), the group would return in their track if it happens before Otorten, or go east if it happens in the area of the Main Range between Otorten and Oyko-Chakur: in this case the group was two-days away form the nearest settlements all the way from Otorten to Oyko-Chakur.
The size of the group was sufficient to continue to move to the settlement with the victim in the event of an accident and send a group forward

for urgent assistance. For first aid, the group was provided with first-aid kits.

Answer: There are no means of radio communication for hiking groups for the following reasons:
а) There are no low weight radio transmitters (up to 6-8 kg) that would have a range of 120-150 km and more kilometers necessary for controlling the group, going to campaign II - III category;
б) A similar range can only be provided by a large weight (40 kg or more), which is unacceptable for hikers.
в) The organization of receiving radiograms from hiking groups in several areas is very complex, requires states and extensive preparatory work, and is currently unpromising;

As mentioned above, Dyatlov group spent about 12 days in uninhabited places; therefore, they were deprived of the opportunity to communicate about their wellbeing and whereabouts along the route. The target date was on their return to Vizhay.
For more effective and quick work on finding groups that violated the deadlines, it makes sense to orga

nize a rescue service in the geographical areas most visited by hikers, for example, in the Northern Urals, entrusting these functions to employees of services related to movement outside the populated areas on a part-time basis.

Answer: During 21-24-26 February, landing parties of the search groups - Slobtzov, Grebennik, Kurikov (Mansi), Karelin, Chernyshev, Akselrod, Korolyov, Moiseev - were landed on the entire 300-kilometer ring of the Diatlov route with helicopters. After the tent was discovered on February 26 all groups were called next day at the scene of the accident with Dyatlov group. In the period until 6.III.59, the 5 dead bodies were found, also the storage (labaz), all the equipment, the skis (in the tent), an investigation was conducted into the circumstances of the death of the group. The aircrafts and helicopters of civil and military aviation, military units of Ivdellag, students and teachers of the Ural Polytechnic Institute took part in the search. Initially, the search was led by UPI "Kirov" (regiment Ortyukov), and from 28-29.II.59 - commission of the regional party committee (headed by Pavlov - deputy Perd Regional Executive Committee). The number of the search group is from 25 to 40 people.

The search is conducted by the Ural Polytechnic Institute; the main method of search - probing the snow cover at the site of the accident with metal probes. At he moment there is free search on skiis in the surrounding areas, since probing  didn't yeal more results.

Answer: The footprints were visible on a limited stretch of the slope below the tent, and only in one place all at once, before and after that - there are are traces from 3 to 5 people, or even less. 8 pairs of tracks, the 9th pair was controversial, because traces "overlaid"  each other. I'm inclined to think that there were all 9 pairs of tracks there, other search members also held the same opinion.

I wrote the protocol myself.
Maslennikov (signature) 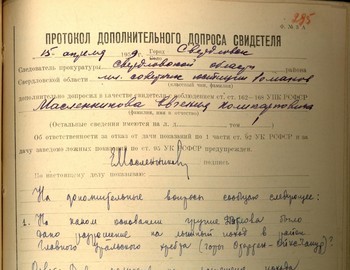 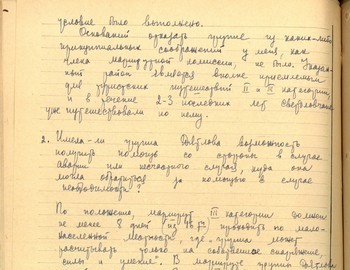 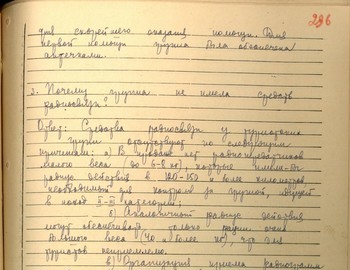 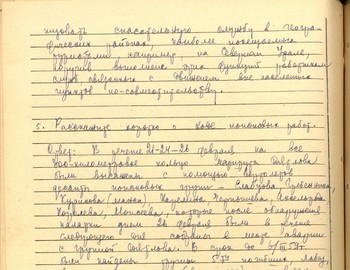 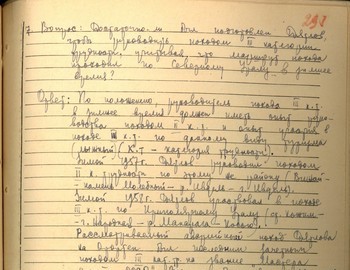