At 6:55 of local time yesterday, in the east-southeast, at an altitude of 20 degrees from the horizon, a glowing ball appeared the size of the apparent diameter of the moon. The ball moved towards the northeast. At 7:00 a flash appeared inside it, and the very bright core of the ball became visible. It began to glow more intensively, and was enshroud in a luminous cloud, enlongated toward the south. The cloud spread to the whole eastern part of the sky. Shortly thereafter, a second outbreak occurred, it looked like a sickle of the Moon. Gradually, the cloud increased, in the center there remained a luminous point (the luminescence was variable in magnitude). The ball moved in the direction northeast-east. The greatest height above the horizon 30 degrees was reached at about 7:05. Continuing the movement, this unusual celestial phenomenon faded and fell apart.
Thinking that it was somehow connected with the satellite, I turned on the receiver, but there was no signal reception.

A. Kissel,
Deputy Head of Communications
Vysokogorskiy mine 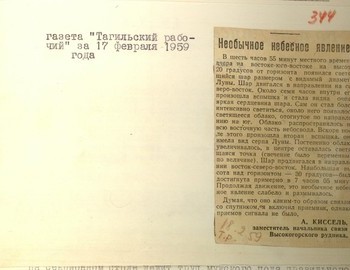