6 March 1959 an investigator Ivdel district of Sverdlovsk region Lawyer 1 cells. Kuzminyh questioned in the village. 41 sq. as a witness to meet art. 162-168 Code of Criminal Procedure

On January 26, 1959 a group of 10 hikers from Sverdlovsk Polytechnic Institute - 8 men and 2 women, arrived in 41st district by truck at about 7-8 pm. They stayed in 41st district for 2 days i.e. 26 and 27 of January. They spent slept in our barrack. 2 nights. They bought some food in our store from whatever was available. On January 27 I was approached by a man and a woman and asked if I can provide a horse to carry their things and products to the 2nd North mine, which is located 22 km from 41st district. I gave them a horse and a carter Velyukyavichus Stanislav Aleksandrovich. On January 28, 1958 at about 10 am, they left with him to the 2nd North mine. People skied and food and other things were carried on the sled. While the hikers were in 41 district they had good time, sang and danced with the loggers. They gave and art book to Master Evgeniy Petrovich Venediktov and had another present to Anatoliy Tutinkov, too. Venediktov and Tutinkov are not at the 41 district anymore, the former resigned and left, and Tutinkov works in Ivdel in Energo Lesokombinat. On return to 41st district carter Valyukyavichus said that the hikers drove to the 2nd North mine, they moved into an uninhabited house and apparently spent the night there. Nobody lives in the 2nd North mine.

Nowadays Velikevichius doesn't live in 41st district anymore, he resigned and left. When the hikers came to 41st district there were no Mansi there and in general they don't come to us often. Velikevichius did not tell me if they met Mansi on the road and I do not know anything about this. Mansi live in Suevat Paul, 40 km from 41st district. Of the 10 hikers that went to 2nd North mine one came back to 41st district on the second day and it seems he spent the night with us but do not remember exactly. This hiker returned back due to illness. He didn't mention meetings with Mansi or anyone else. The returning hiker went with me on a motor vehicle from 41st district to the village of Vizhay. I don't know anything about Mansi having sacred mountains and paying stones in our area, but I have heard from people that they have the sacred pit on Lozva river. I have nothing more to add, from my words the testimony is recorded correctly and I have read it. 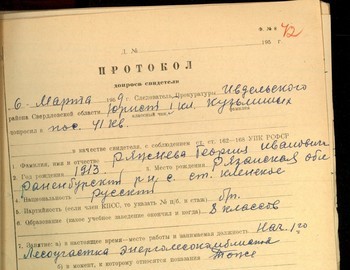 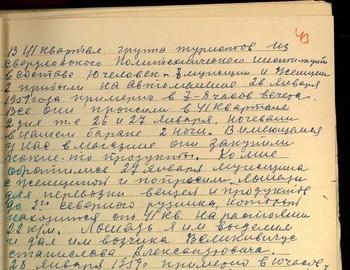 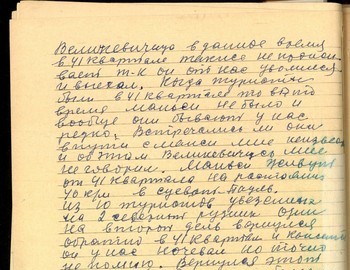