March 7, 1959 Investigator of the Prosecutor's Office of the Ivdel District of the Sverdlovsk Region Kuzminyh interrogated on the premises of the Vizhay logging department 240

As a witness, with the observance of art. 162-168 Code of Criminal Procedure of the RSFSR

The witness testified: on January 25, 1959, a group of hikers addressed me as the head of the forestry, they showed me their route seeking advice what is the best way to get to Mt Otorten and asked me to familiarize them with our maps of the area where they are going. When I got acquainted with their route I expressed my opinion that in wintertime it is dangerous to go along the Ural ridge because there are large gorges, pits in which you can fall and besides there are strong winds raging, people have been hurt. I told them my concern because I know this area of the Ural range from the words of local resident, I myself have not been there. To my statement, they answered that this for them will be considered the first class of difficulties. I answered, good, but first I have to go through with it. I gave them a plan of the terrain, they copy their route on top and outlined the border of the forest plantations of the Ural range. I advised them to take a shortcut on one of our forest paths. They said that they will decide when they arrive at the 2nd Northern mine. After that on January 26 they left with a passing truck for the village 41st district.

Continuation of the witness's testimony I. D. Rempel

My personal opinion about the death of hikers is that they could die only from a natural disaster due to climatic conditions. I don't believe that the Mansi attacked them or had any interest in their death, because I often meet them and I have never heard any hostile statements from Mansi about other people and they are always very hospitable when I visit or meet them.

From the stories of an old-timer I know that people have died before when going through the Ural ridge.

Mansi living on the territory of our forestry don't have sacred places or prayer stones in the area where the hikers died. From the stories of local residents I know that Mansi praying mountains are in the upper Vizhay 100-150 km from the place of death of hikers. 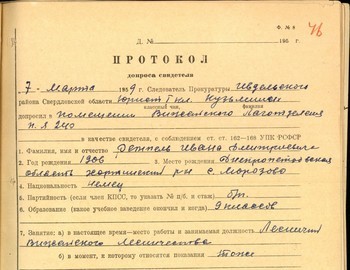 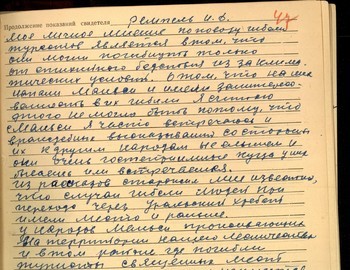