March 7, 1959 investigator Ivdel district of Sverdlovsk region Lawyer I class Kuzminyh interrogated on the premises of the Vizhay logging department as a witness in compliance with Articles 162-168 Code of Criminal Procedure.

The witness testified: On February 23, 1959 6 of us were dropped off from a helicopter in the area of Mount Otorten ​​to look for the lost group of hikers. On the first day of the search, once descended into the Auspiya we found ski tracks from the hikers. Here we pitched a tent, spend the night, divided into three groups and went to look for the hikers, as a result of the search we found a tent with belongings that was not clearly seen since it was covered with snow, we did not go into the tent. The tent was found in the upper sources of Auspiya and Lozva at the height of the mountain Verhuspiya. When we went down from Mantveevska Parma we saw a wide ski trail that followed a trail of a moose. The Mansi ski trail was 10 km from the tent of the hikers and there were no ski tracks near the tent, Mansi or hikers, since the tent was drifted with snow. On the fifth day of our search we found 4 bodies covered with snow and on this day we were taken back home with helicopter to the village of Vizhay. We found the first stop of the hikers at about 17 km from where they found dead and 20 km from Lozva. At one kilometer from the the tent of the hikers we found Mansi stand where they herded the deer but the tracks were fresher i.e. left after the death of the hikers because the

tracks were more recent than the footprints around the tent of the hikers. The mountain where the hikers dies is not sacred for Mansi people and their places of worship are very far from there by Vizhay river. Mansi couldn't have attacked the hikers, on the contrary, knowing their customs they might be of help for Russians. There were cases that in these places people go astray and Mansi find them and provide shelter and food. I believe that at this time when we were there was a strong wind and blown off the mountain. Around the time when hikers were killed even in the village of Vizhay was a strong wind and storm, from which the children were falling down. I am a hunter from an early age and I know these places well, and I remember that there were cases of strong winds when people got killed. I myself had to sit up strong winds for 6 days without food in the hollows expecting when the winds would calm down. When Mansi were called out to join the search Kurikov and his relatives came on their reindeer from Suevat Paul, they behave normally and did not show any signs of fear or remorse for what might have happened to the hikers, but on the contrary they were very compassionate and provided vigorous assistance in the search. 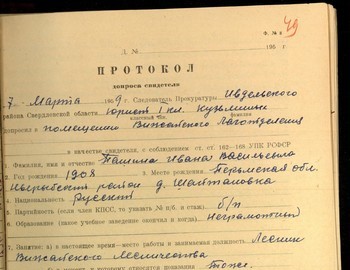 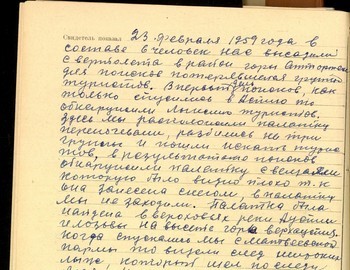 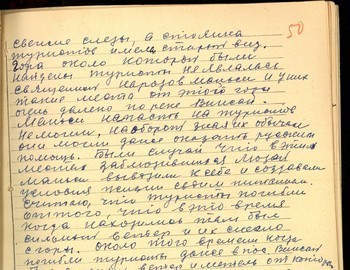