Answering the questions at hand. I have 5th grade education. I wen to school at the orphanage in Burmantovo until 1949. I am now working as a shepherd  for the deer that belong to the orphanage in the village of Burmantovo. I am married, I have three dependent children from 6 to 9 years old. We live 60 km from the village of Vizhay in the upper Vizhay river. There you have four yurts and one old yurt, in which no one lives.

I left my residence on February 28, 1959 with two sleds. I was riding on one of them, while on the other sled was Prokopiy Bahtiyarov. We arrived on1/III-59 at the village of 19 patrol and drove to the 1st dam to a relative Nikita Vladimirovich Bahtiyarov, to buy his small-caliber rifle and stay for a while. And Prokopiy camewith me. On 6/III-59 we went with Nikita

and Prokopiy in Ivdel to register the rifle, and for me to get permission to buy Nikita's rifle. Around the 20th of February 1959 a helicopter flew to our yurts and 2 people that we don't know came to the tent. There were only women at the yurts at the time, all men were humting deer 8 km from our yurt. When we arrived back at the tent, Katerina, my sister, said that 2 people came and asked whether we have seen any hikers. She told them that we saw hikers 2 times. The first hikers I didn't see when they passed, but it was a month ago, I was in the village of Burmantovo. I heard from relatives that they were 10 people, I don't know if there were women amongst them. These hikers did not spend the night here as I learned and stopped only to rest. The second group of hikers came in late January and spend the night. There were 8 people and one or two were women and they spend the night in my brother's Pyotr Yakimovich. We talked in the tent with these hikers. They said they were going to the mountains, but didn't say which one. They asked what way to take along the river or another one, and they went on the way to the top of the river Vizhay.

I haven't seen any other hikers. We were at home until February 10, on 10/II-59 I left to the village of Burmantovo with Pyotr Yakimovich. I went to hunt deer, and Pyotr to visit his aunt Nina Bahtiyarova in the village of Suevat-Paul and I went with him. In total we stayed in Burmantovo and Suevat-Paul about 10 days. Yesterday, i.e. March 9, 1959 Mansi Nikita Bahtiyarov and I were at the store by the river Orasu Pru and one drunk that I did not know came up to us and said: "hikers are missing probably Mansi killed them". We told him that's doubtfully the case, since Mansi have never killed anyone and they don't have a reason to kill hikers. My brother Pyotr Yakimovich has tuberculosis and he has hard time walking, he doesn't even come to hunt. Our prayer stone is now in the mountain Oyka- Chakhl at the upper sources Vizhay river and I know that this payer mountain has not been moved. Russian men and women are not forbidden to come into the mountain. This mountain has never been guarded by Mansi and it is not guarded now. I never looked for the hikers that is I have 1200 head of deer to take care of, and I have to shepherd, there are a lot of wolves. Prokopiy Bahtiyarov can go look, but my brother Pyotr is sick, he doesn't even go hunting. 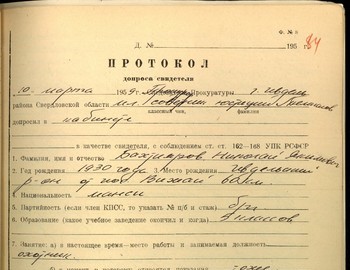 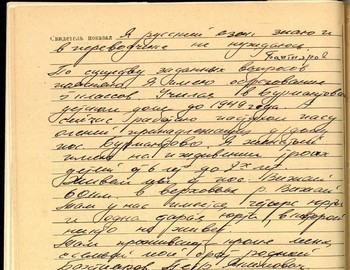 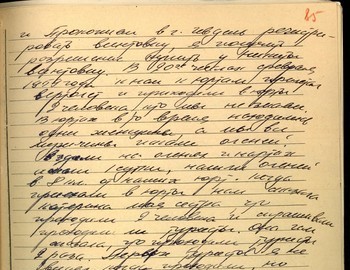 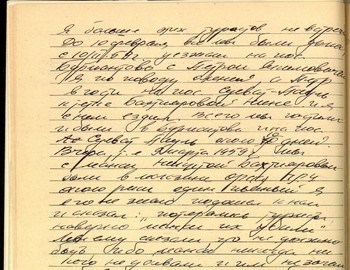