The Ministry of Internal Affairs of the RSFSR

Ministry of Internal Affairs of the Sverdlovsk region

I, the Attorney forensic Ivanov

interrogated as a witness

Yesterday, 11/III-59, I was in the Northern Expedition guesthouse. In the evening in the house for visitors came 2 people of Mansi nationality. Both were dressed like Russians - one in the demi-season coat, and the other in a short coat.
One of them wrote something, and when he had finished writing sealed the letter in an envelope. He didn't write any address on the envelop and gave it to the other Mansi.
While the Mansi was writing the letter, I saw the name Kurikov. I don't know what was written in the letter. The Munsi left right after that.
I met party activist Karpov in the corridor in the guesthouse, and I describe to him the two Mansi that I didn't know and that they wrote a letter. This morning I haven't seen these Mansi.
I haven't mentioned to Karpov the name of Hatanzeev and Hatanzeev was not in the guesthouse that day, or at least I haven't seen him.

I have personally read the protocol, recorded correctly (signature) 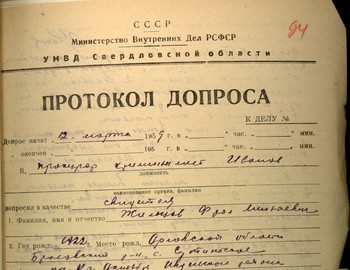 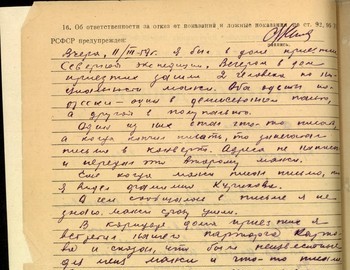