Tracks of the Dyatlov group. Where people left the tent walking in the soft snow remained convex traces, since later all the loose snow around the tracks blew out with the wind. In some places, the footprints are very clearly traceable - they walked in a group, the foot and heel are clearly visible, and in some places the traces are blown over by the strong wind.

In places, between the stones were ice (a thin layer of ice, and under it loose snow). The traces in such places were visible in the form of holes. 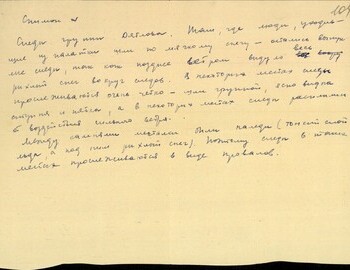