There was an incident in February of this year in the Sverdlovsk region - a hiking group of 9 people died in the region of Mt Otorten. As a result of searches carried out from February 27 to the present, 5 people were found dead, with four dead bodies discovered by free search, as were visible on the ground and only one corpse was discovered by probing the area with steel two-meter probes. At present, one can confidently assume the region where the remaining corpses are located — in the valley of two spurs of the ridge with an area of 30-50 ha, however, due to the dense, and in some cases very deep snow, corpses have not yet been discovered. The enormous cost of funds for searches can increase even further if the search groups do not apply any new methods in detecting corpses. It should be noted that the use of mine detectors did not produce results, because the corpses are half-stripped and do not have relatively massive metal objects. We know that one of the All-Russian Research Institute of Criminalistics under the USSR Prosecutor's Office projects included the development of a device - a seeker for buried corpses, and the principle of operation of the device is based on the properties of ultrasound. There were verbal reports of the positive results of the operation of a prototype of this device. Given the situation and in consultation with the search committee of the CPSU Regional Committee, we consider it very useful to try the operation of such a device in the search.

I ask you, if possible, to positively resolve this issue. 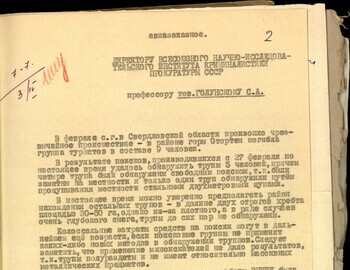