This piece of art now symbolizes our puzzlement over the events of February, 1959

The location of the new monument relatively to the place marked TENT where the pile of rocks and pin were left by researcher KAN (photos) is marked according to the words of Aleksandr Alekseenkov (Shura) who went to the pass in 2021, and escorted Kuntsevich back to the camp on Auspiya. His words, verbatim: "The new monument is about forty meters north-slightly to the west of the cairn and stick marked TENT on this map." 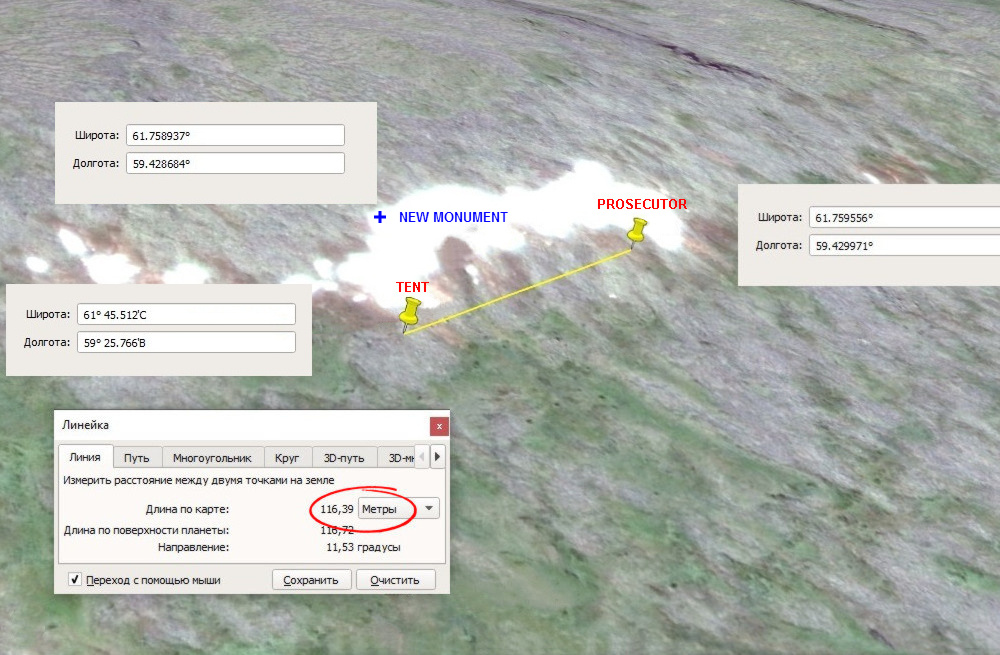 Read about the controversy regarding pinpointing the location of the tent: Russians vigorously disagree with the Prosecutor's results.

A huge monument was erected at the Dyatlov pass

The monument was dragged with difficulty to the top 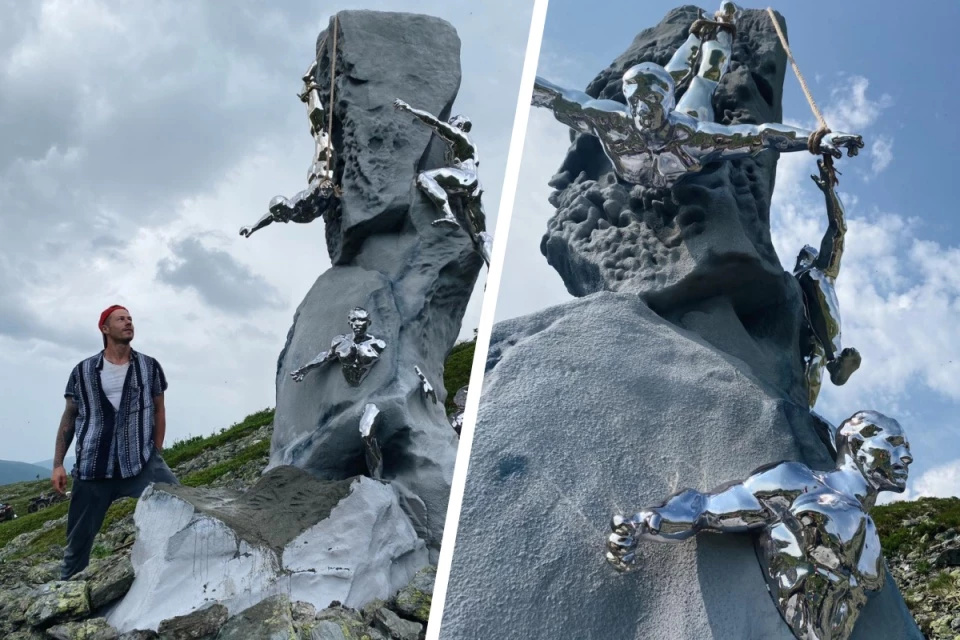 A huge four-meter sculpture was erected in memory of the students who died there in 1959 at the Dyatlov Pass. The author of the monument is the new wave artist of the Russian avant-garde Grigoriy Emvi (real name Grigoriy Maslennikov).

Grigoriy graduated from the Nizhny Novgorod art school and at the age of 24 decided to devote himself entirely to art, now he lives in Moscow, then in London. He received wide recognition for his work in 2014 Manifesta 10 (St. Petersburg), Fair Enough (Biennale, Venice) and "The Golden Age of the Russian Avant-garde" (Manezh, Moscow). Gregory has two conceptual art collections - "Moment. True Faces" and "Human Souls". In October 2014, the art exhibition "Human Souls" was held at the prestigious Frieze Week in London.

He and his team had to drag the sculpture to the pass.

— What I experienced with the team over the past four days, climbing the Dyatlov pass, and not in vain or having only equipment and equipment with me, but taking on the trailer a four-meter sculpture, tool, cement, metal frame - a base created from boards on self-tapping screws, a flooring and a couple of boxes with disassembled elements of the sculpture, the erection of which on the pass in honor of the guys who once died - in fact, this was my mission, as well as the mission of the association of entrepreneurs "Leaders' Club", thanks to which I created the monument, and all my team, - said Grigoriy about the trial.

We show the work from all sides. 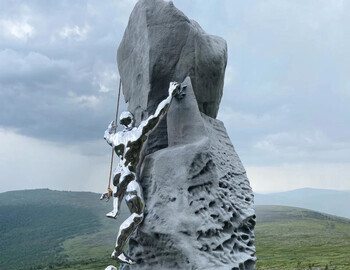 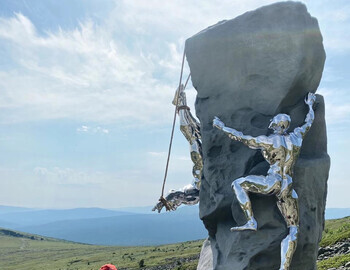 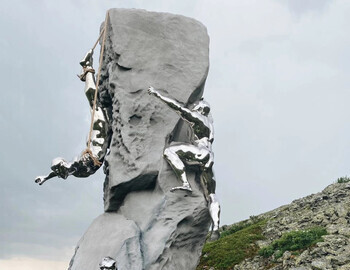 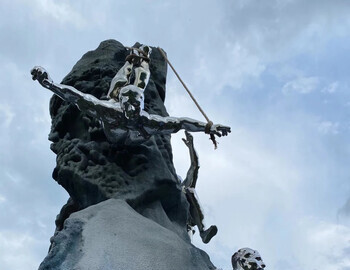 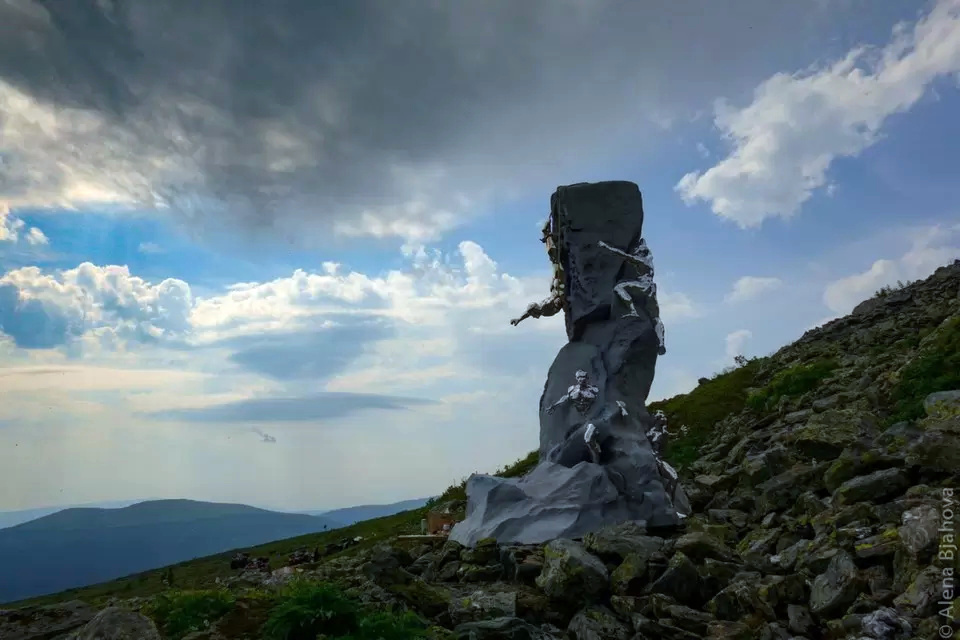 The unusual sculpture has become a new symbol and meaning of the tragedy at the pass. Photo: Alena Bjahova
Read on WWW.KP.RU

What do you think of the new monument (poll) →

What Russians think of the new monument (taina.li)→

This looks like a Philadelphia Experiment to me. Looks nothing like the nine people and nothing to do with skiing.
I don't believe anyone commissioned the art, if this is what you mean. It's an self-advertisement. For the mounting Komsomolskaya Pravda most likely chipped in for the rights to report the installation as a news.
Why? The sculture is hualed up a mountain and placed, the figures look like climbers naked not skiers and who paid for this project? Why wasnt it placed where the tent was if it suppose to be but not
I honestly don't think the monument is beautiful. A large stone with a cross on it and the photos of the hikers in memory would have been much nicer, at least in my opinion. In addition, perhaps age information, time of the hike etc.
Ich finde das Denkmal ehrlich gesagt nicht schön. Ein großer Stein mit einen Kreuz darauf und den Fotos der Wanderer zum Andenken wäre zumindest meiner Meinung nach viel schöner gewesen. Dazu vielleicht noch Altersangaben, Zeitpunkt der Wanderung etc.
My only hope is that someone removes this. It is horrible and a disgrace to those who lost their lives on the pass.
What!! Disaster
Completely agree with Natasha Cooper. What is this?? Couldn't the figures have been the Dyatlov 9 hiking?
What the heck...? What a shame! This has got nothing to do with the 9 hikers at all. It's like...nah, I don't have any words for this.
In my opinion, this does absolutely zero justice to the memories of those who lost their lives. This looks like a circus act gone wrong. Such a shame that if anything had to be put there that it couldn’t have been much more tastefully done.
This giant incomprehensible phallic abomination now stands where once the Dyatlov group tent was. It will forever deface its surroundings.
Add comment
Related articles