© NGO "INTERNET CENTER of the Dyatlov group tragedy", 2009
Text of the video recording of the speech at the evening of February 2, 2009, 50 year anniversary of the tragedy.
The copyright for the sound and video recording and this text is owned by the CENTER for civil investigation of the tragedy of the Dyatlov group.
The text was compiled by Longeron, verified with sound recording by NAVIG.

Photos are from a different trek, but they reminiscent of the Dyatlov group fateful last trip. 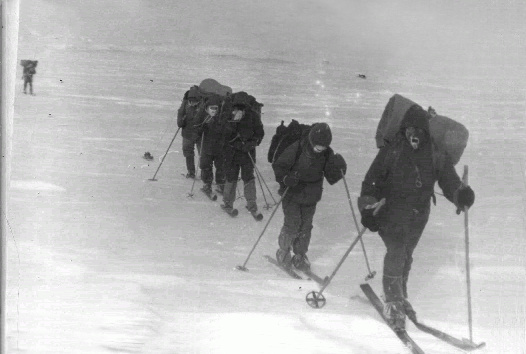 ... Firn, which is everywhere, except for the forest, it is the same in the tundra ....

This means that the entire tundra of the polar Urals, with the exception of forests, is a crust, like this floor, and when we first landed from a helicopter, jumped off, saw that the skis did not sag, the legs did not go in, we thought it was only in one place. The whole tundra is like that. And the crust that they had was the same tundra and those mountains that are on Wrangel Island (Alaska), it is the same in the Northern Urals, crust is everywhere. And it is typical for these, so to speak, peaks, for a special mark, and which are present there 800 meters and higher... continuous crust, and the strong winds blow the snow from the slopes of the mountain and carry it away. The stronger the wind, the higher this layer of blown snow, it increases, and if this continues, say, for several hours, then this snow dust rises to 4-6 meters i.e. you practically see nothing.

We found ourselves in such conditions in the tundra. The wind was up to 40 m/s, but we entered the route according to the schedule at one o'clock in the afternoon. We knew that we are in a blizzard, but we decided to adhere to the schedule. We moved for 4 hours. Тhe visibility decreased after 3 o'clock somewhere up to 5 meters, moreover, we had two girls, one of them could hardly stay on her two feet, and we often rested. The carried 35-40 kg on our backs, because we made the equipment ourselves. We sewed together two airplane covers each fitting 4 people, you can imagine what it is... such a tent was sewn from... it amounts to a serious volume and hard to put down and pick up... Breaks were not possible. And so we rested on our ski poles for 7-8 minutes, couldn't do more. Snow at this time is clogged in all holes, just like in an avalanche. If your pocket is unbuttoned or there is any other opening, it will be full of snow, full. Everywhere, it finds its way everywhere. We were all wearing masks of course .

And after 4 hours, it became clear that it was no longer possible to go. We had to prepare for the night. We put up the tent, then built a wall against the wind, which was a mistake. There was no information at the time who to do this any better. Not a single report, not in Moscow, nowhere. It was nothing in the literature. Only one case was described on the eastern slope of our ridge, the group passed and then got lost there and ate the buds of birch trees. There is nothing in the tundra. They were afraid to go there. I’m telling you this seriously, because later I got to know them closely... after they came back from Vaygach Island (Arctic Sea). We were not allowed because they themselves wanted to be there first. It's true.

So we were forced, when we put up a tent, a wall like this, like this... And the wind was blowing on it, and tons on our snow masonry crumbled down, and we were left with only one opening. I was in the middle, I tried like this with my hand - it's like hitting a wall. Like in a cave - nowhere, nothing. And you said it right, for 2 nights... we couldn't do anything, the first two (who went out) came in covered with ice. I used an ax to break this caked crust like on the ground and at least somehow start taking it apart. Then the third couple managed to remove the snow pieces from inside and put them away and strengthen the tent so that it won't happen again. The wall was removed so that the wind could blow through without any obstacle.

We stayed in the tent for three days. Later we were told that in Vorkuta they thought that we were dead. Eight people are dead. People saw that we left and so on. So, I want to say that for three days we sat and discussed what to do next. Return, or continue the route. From time to time I leaned out of the tent, 35-40 m/s, I know this beacuse we were later informed that in these three days the wind was this strong. And while we were sitting there for three days, our tent was more than half covered. What does it mean? Everything around was evened down, like this floor. The whole tundra is like that, i.e. all flat. The backpacks that were left near the tent - there was not a single one. All were buried. After three days, when it seemed to have calmed down, we got out, sighed, seems like, the wind is only a drifting snow very low to the ground. We then starting digging out, looking for our backpacks. These were the lessons of the first expedition. The next year we went prepared.

It was three years 1961-62, no, 1962-63-64 when there were three consecutive winters very snowy, windy, very cold. We were lucky, as they say, in quotation marks, to get into precisely such conditions, and we were later told from Vorkuta when they said "we have never had anything like this".

What I am getting at? The conditions in which the members of the Dyatlov group found themselves, these are the very conditions, and talking about some kind of accumulation of snow that could break and make an avalanche, is complete nonsense, because the snow does not stay there. The snow is usually simply not covering the stones where the winds blow, and there the winds all the time, there simply cannot be any shafts of snow that could, God forbid, roll down. It's just out of the question. But this is an opinion, I'm not going to dispute any opinion now, people can develop their own version, everyone has an opinion, and let them have it. My point of view is completely different.

These guys, knowing their background... when it became clear later in detail who they were, what they could do, what they knew, what happened, and so on... it became clear, given their experience, given their age, given everything, even youth, let's say, to destroy all of them just like that, well, it's impossible. At least not by natural conditions.

It's hard to imagine such conditions generally speaking. They were on a bare site, if they were on this slope, here's the wind for you, here it blows and that's it. So what? We sat for three days in such weather. And this is not the only time. I have completed more than thirty winter routes in all conditions. In the mountain and what you want. People who are prepared, thoroughly, with equipment, cannot die if they themselves want it. I don't think these guys wanted to. Even, I admit, if they were there, in the forest, this logic is generally incomprehensible, so to speak. So they went and ended up in the forest, what prevents them from living? Nothing. You understand when they find themselves without gloves. In socks. When they find themselves in shirts alone, in such conditions a person will not last in the sense that his hands freeze, simply because a person’s hands freeze first.

If your fingers freeze, you are helpless. You can't pull out the matches, let alone strike. You can't do anything at all. If you don't believe me check it out yourself. Another thing surprises me that in 50 years of debates, no one tried to reenact with friends, undress to a shirt and socks, without mittens, and in same conditions run 300 meters and make a fire in the forest. I say in the forest. Make a fire, I assure you, it means at a temperature of -20 degrees, believe me, at -20 degrees, God forbid, and a light breeze, even in the forest, right? No one. I boldly, of course, say, I would not want to talk like that, and about myself too. So after walking three hundred meters, in this situation... in the snow, no one will be able to make a fire. I assure you, you can not make a fire in those conditions. Try it yourself, I'm not talking about 1.5 km (one mile), it's a VERY long distance, you know, it's almost half an hour of running down. We run a kilometer on skis for ten minutes. And here on foot in these conditions it will be minutes ... 20 ... yes, add 10 minutes. Half an hour in the cold, but without mittens - this is unthinkable. This means that your hands will definitely freeze, and they will freeze along the way. I'm talking about dressed - hands, and already undressed, there's nothing to talk about at all. Therefore, bringing people to such a state and expecting something from them is completely out of the question. They were doomed to die.

Doomed by the cold in these conditions. They had no chance at all. No matter what they say, first of all, they would not get that far, one and a half kilometers, especially in the snow ... in the forest the snow is two or three, four meters deep. ... In any winter, where they were, returning to the fact that these natural conditions could not kill them. They wouldn't kill themselves.

And why did they separate? Why aren't they all together? Considering this, knowing the effect of frost, 1.5 km (1 mile) is generally an unthinkable distance to walk under these conditions. I say check it out for yourself with your friends. At least 300 meters in the forest in these conditions. And light the fire. It won't work. There were 8 cm logs laying around. There are a lot of branches on the ground, but these are not their firewood. They belong to someone else. To burn out a log 8 cm in diameter, you need a strong fire. And the fire needs to be such that it blazes. For one hour. Who will prepare such firewood there so that they can burn...

This is impossible. And secondly, I don’t even want to say it. This is my own opinion. They were helped to die. Helped to die in this cold. I don't know who. But I'm sure that there was someone. This is my opinion. I thought of it right away when I learned about the incident. I already had enough experience to understand it, and then it became a conviction. There are other versions, but I do not agree with them...

Female voice: Well, it was possible to die there without help...

Photos are from a different trek, but they reminiscent of the Dyatlov group fateful last trip. Full report 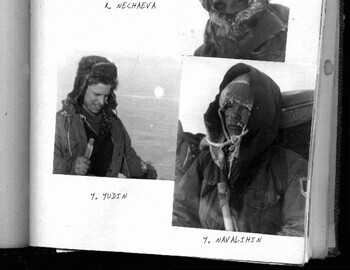 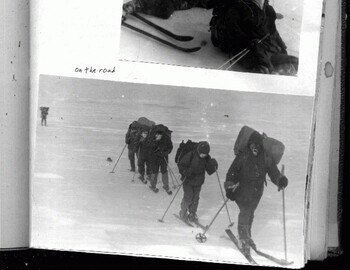 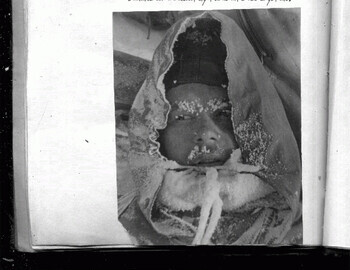 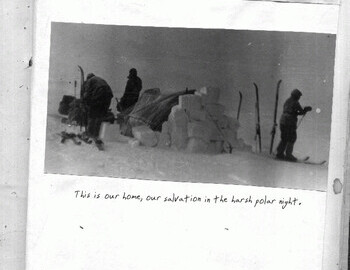 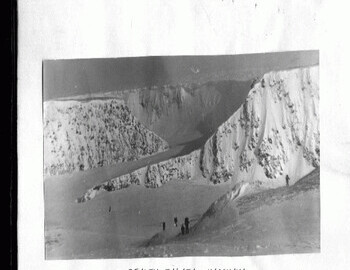