I am sorry to have waited to answer your questions. We received a newspaper from Ivdel, and our daughter Lyudmila made a copy we are sending you so that you can see what the Northern Star of the city of Ivdel is writing !!! Have you graduated from the institute?

I am answering your questions!

I am 86 years old now and I don't remember everything.
In what hospital did I work at that time?
Dr. Prudkov and I we had an Institute of the Ministry of Internal Affairs. This is the Headquarters of the Military Unit of the N-240 which dealt with the affairs of prisoners, colonies.
We had a lot of colonies!
In Ivdel next to the Headquarters, they were disembarked from the bus!

At Lesozavod, Gidroliznom, Burmantovo, Vizhay, Lozva, Ponilo, there were convicts staying there! The military unit was managing the lives of prisoners !!! And this management had its own hospital, and in the courtyard of this hospital there was a morgue for the dead, and in this morgue your friends were examined !!!

2nd question. Who were the doctors that participated in the autopsy?
Besides Prudkov Yosiph Davidovich, no one else, maybe someone was called but we were not aware of this!
The dead were examined, dressed in new clothes, laid in coffins, board up and taken to Sverdlovsk by airplanes and said that they were immediately sent to the cemetery and buried !!!

I did not know doctor Ganz, I did not see him!

3 question! At first were brought 3x! 2 girls and one guy!!!
Their faces were like those of the dead. I think I wrote you that one of the girls had her hair burned on one side, on one arm, one arm had the sleeve slightly burned and the fire slightly caught on one foot, but on these two the clothes were normal, only dirty, they all crawled, but of course they were also soiled !!

After these were found another 3, what date I do not remember, and after that were brought 3 more. If I knew that I would have to tell later everything in detail, we would have kept with Yosiph Davidovich Prudkov everything in writing in the archive. Yosiph Davidovich went to Sverdlovsk and soon died, had an operation of rectal cancer, unsuccessfully in Sverdlovsk, and was sent to Moscow, but there they could not save him and sent him home to Sverdlovsk and he died soon after!!!
He was a holy man!

And I went in the zone with Sharonin Anatoly Alexandrovich. I was given a job in the surgery in the zone. This was in 1988.

I worked for 54 years as a surgical nurse and took night shifts in the zone, we were paid by the Headquarters, 250, and in the zone for night calls were paid in double!!! At the free hospital if we were summoned at night the hours were not paid. In the zone surgeon Sharonin Anatoly Alexandrovich died at the age of 68.

I can not say anything else to you. More thanks for your congratulations on the New Year! We wish you good health! May the Lord God bless you and your family! Sincerely, Pelageya Solter

(vertical inscription :)
If you have more questions to ask
us!!! We will answer
Sincerely, Solter Family
ph. 753 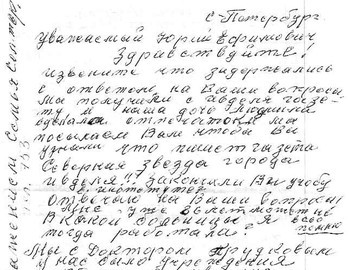 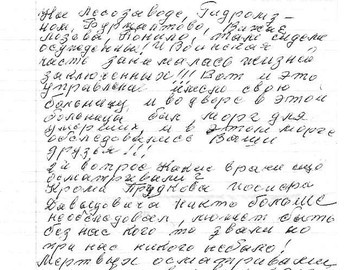 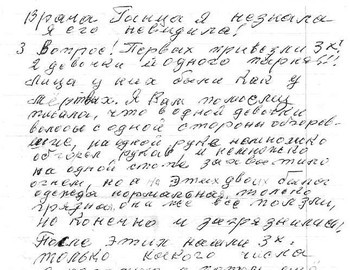 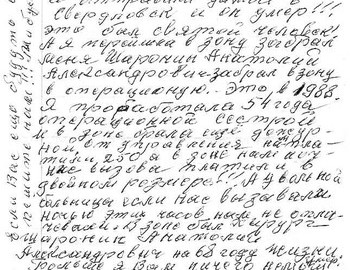