Yuri Yudin was tormented by the mystery 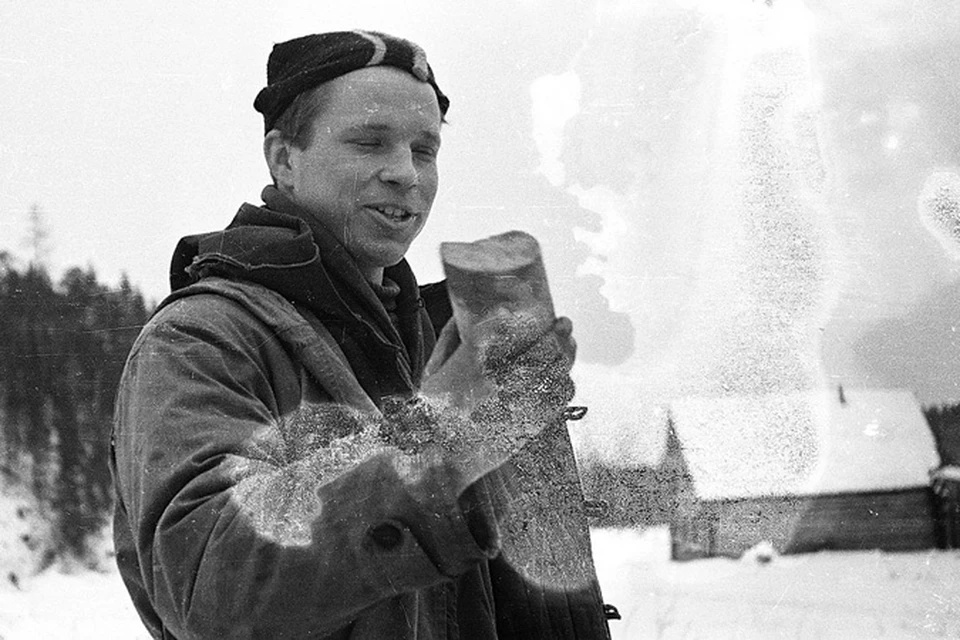 Yuri Yudin during the fateful treck of the Dyatlov group

Recently, the last member of the Dyatlov group, Yuri Yudin, died. Our correspondents took photos of his diary and a number of notes on the investigation into the deaths of hikers on Mount Holatchakhl. Attention, published for the first time!

Until recently, no one knew about the existence of these records, except for the author of the diary himself. The diary was kept in the general pile of newspaper clippings, old magazines and Yuri Efimovich's own manuscripts. It was discovered by members of the Dyatlov Group Memory Fund when they entered the apartment of the deceased.

The blue worn notebook is crumbling from old age, more than half of the sheets are missing from it. On the first page there is a line - "To the blue-eyed Y2 E. for a diary." This inscription in January 1959 was left in neat handwriting by Zina Kolmogorova. She was responsible for maintaining the hiking "chronicle", and therefore personally gave everyone a notebook. 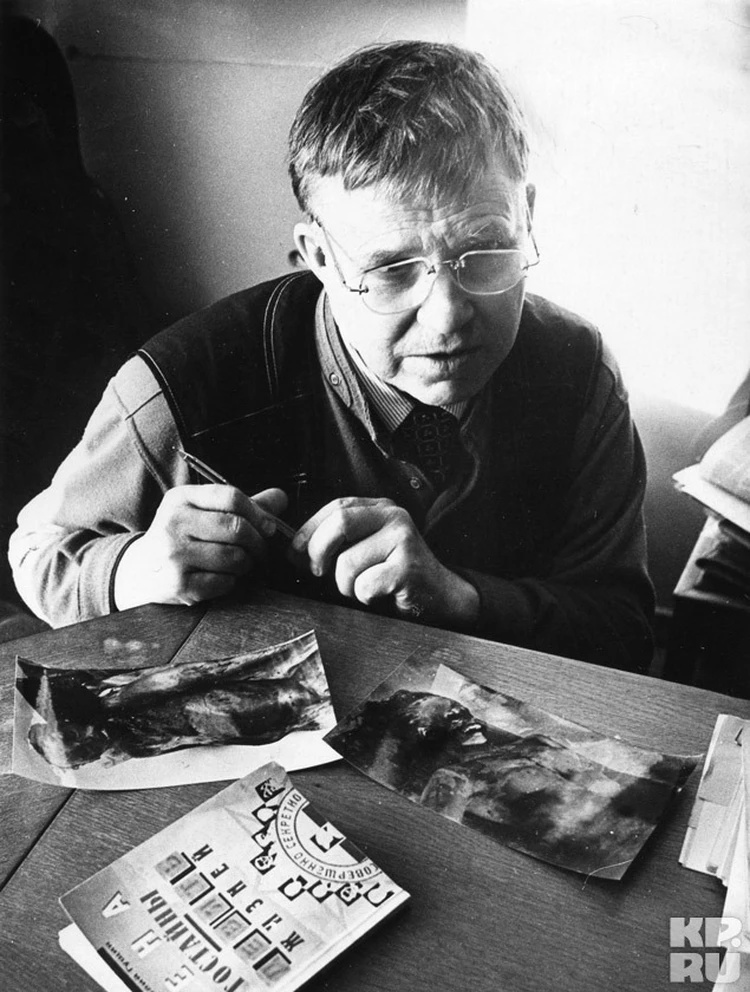 Yuri Yudin's entries in his diary describe the same events known to us from the writings of the participants in the hike. However, the researchers of this tragedy will find a few new interesting details. The life and customs of the local population, in particular the loggers, are described in a very interesting way. The loggers were the last people the hikers talked to a few days before their death. Here is a full transcript of all pages of Yudin't diary →

"The horse was provided free of charge"

"Jan 26, 1959. We arrived in a truck without brakes, broken springs, etc., to the village of District 41. Only in the taiga you can drive any vehicle.

Ognev, Nick? since 1931. - long beard. He knows the whole of the Northern Urals. I was a participant of many geological expeditions. Quite knowledgeable on many issues. He graduated from the Ufimskiy Technical College.

In the truck (that) city we came, we brought 3 movies: "On His Own" by Gorki, "Est takoy paren" and "Sympnonie in gold".

"On his own" - under the usual circumstances, in the city, I would have never gone to see this movie. It seems nothing of interest in it for me, waste of time. Here - you start watching ... and from the very first frames you feel that the movie is new for you, you see it with different eyes than before and many new thoughts are rushing one after another under the impression of what's on the screen.

Grandma plays excellently. Above all, full penetration into the role. Wealth, depth, importance of thoughts, content. And all this follows by itself, without any imposition... as in a life without words... 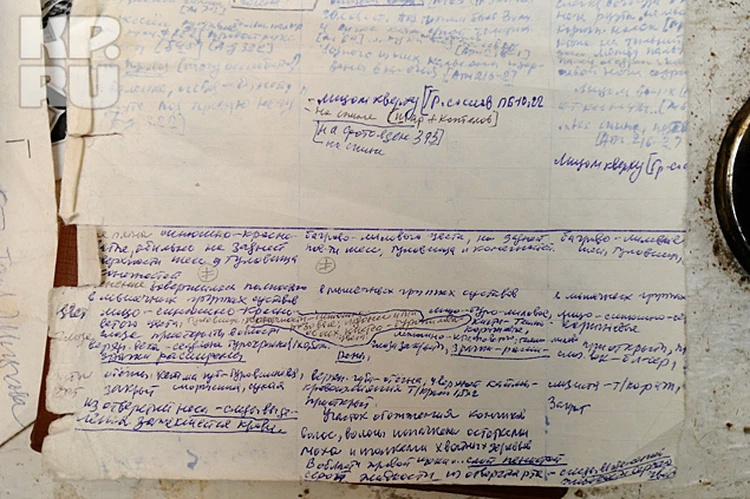 These notes by Yuri Yudin are of great value to researchers of the tragedy.

There is another recently released motion picture. Paren (est takoy paren - there is such a guy) - the characters here, the artists portraying, are represented only by what they say at the moment and is not clear where and how did they originated, what they say and what they do. It seems like they (the characters) are created to say only these particular words, and there is nothing else for them to say, and to do. not clear, I find the screenplay weak and superficial, bad stage director, bad artists and in short there are not living people on the screen full of thoughts, capable of creating stories themselves, but some automatic machines tuned to a spec. program, and that's why there is no performance in the whole movie. They could have said in advance what the movie is about, and how will it end. The whole movie in 5 mins.

"Symphonie in gold" - austr. About ballet on ice. The ballet itself is a good show. Good skating rinks, skill, technical performance, but feelings, thoughts in dances - none. It seems to me that way? The light music in places is excellent, it can't be better, but in general I couldn't feel the Person, his soul. Maybe that's why everybody that saw the movie was saying: "It feels so good, nothing is missing, they say "like life itself"

We are warmly welcomed here. They gave us the only horse available here to take our backpacks tomorrow for free to 2nd Northern logger's site about 150 km? from such a northern town as Ivdel. There is no radio, no newspapers. (They still can't check the lottery and I promised to send back the newspaper immediately from Sverdlovsk). They live in a dormitory. No order whatsoever, but people are everywhere. Read everything that they can get their hands on and do they sing... Quietly, from the heart. The songs are old, long forgotten or never heard. Here they are... It's so good! Why don't we sing such good, already forgotten songs. And in general, we don't sing about the soul in places where there are some outsiders, it's not singing, not soulful, loud. 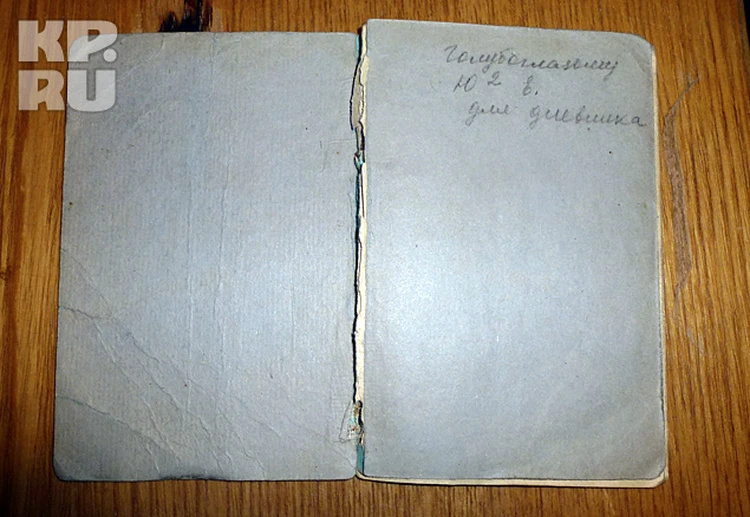 We must fight for the culture of choral singing. Voices and change the repertoire. So that there were no empty song-trinkets.

Loggers are working poorly, work and life conditions are bad. Are they paying poorly? Strike. Everything is possible, but there is no good intelligent leadership. Master - once he studied and did not finish the Moscow Forestry Institute.

The workers are very different. Recruits after the army, after serving time (to earn some money and stayed, or for free). Many don't last, - they quit They work The majority has primary school or no education at all. But there are widely erudite and even If you meet them in the city, you would never have thought that this person all his time in the taiga.

Uncle Slava. Funny, somehow people do not think how this or that name will sound after uncle or grandpa...

What a funny grandpa!

Until 1953, they threw in jail everybody that they could catch, innocent, then they figured it out and cleaned up, everybody was given rushed amnesty." 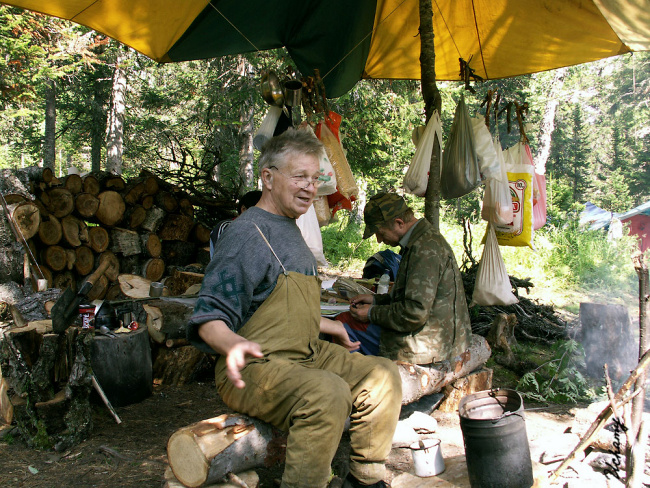 Yuri Yudin went on hikes as long as his health allowed

"The pharmacist is German, the wife is German"

"27.1.1959. 27 We spent the night in the hut of the 2nd Northern settlement. There are so many houses, warehouses, premises, forgotten old vehicles, machine tools. Everything was abandoned since 1952. Here worked а geological expedition. They took out what they could, the rest was written-off and abandoned. The houses are all dilapidated, there is only one with a stove and glass on the windows. The place is picturesque. Lozva river is wide. Lots of lime rocks. Uncle Slava says that in the summer you can cross the river. There are many warm, hot springs. Sagebrush is not entirely frozen and there are places under the snow where water is not frozen after which we need to break the ice from the skis."

In the next entry, the author talks about the village of Vizhay. It turns out that by this time Yuri Yudin had already parted with his comrades due to his illness and was returning to Sverdlovsk.

Apothecary - artist Herzen (illegible). German, wife is German. Idyll in the family. On the walls, relief paintings with filigree decoration, very masterfully, unusually finely executed. Ornate box with a view of Lozva in the summer and another in the winter, more jewelry boxes, paintings - everywhere. Big ones.

His wife is German, very affable and hospitable. They are really short of medicine and keep what they have for the children. He begged me to get penicillin in tablets from Ivdel, as they have very little."

On this, Yury Yudin's travel notes break off and only on the next page are a few lines, which, apparently, were made much later than February 1959.

"Boring, all tired of the lecture. It's always so good to bring something new, a new thought, a new direction in a conversation..." 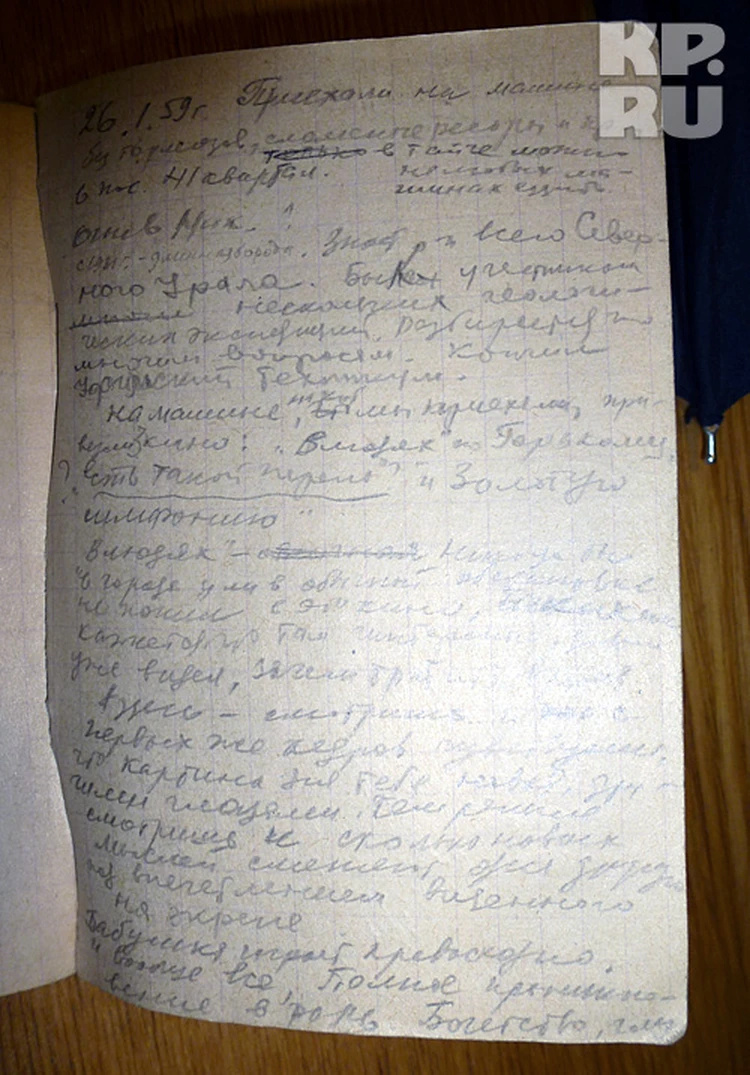 "The leads point to the military department"

But the diary is not the only legacy of Yuri Yudin. Throughout his life, his archive has accumulated many of his own manuscripts, in which, while studying the documents of the criminal case, he carefully analyzes what happened to his friends in 1959 on Mt Kholat Syakhl.

We had to work hard to read the notes, sometimes chaotic scribbles on the yellowed pages, in which the author probably navigated easily. 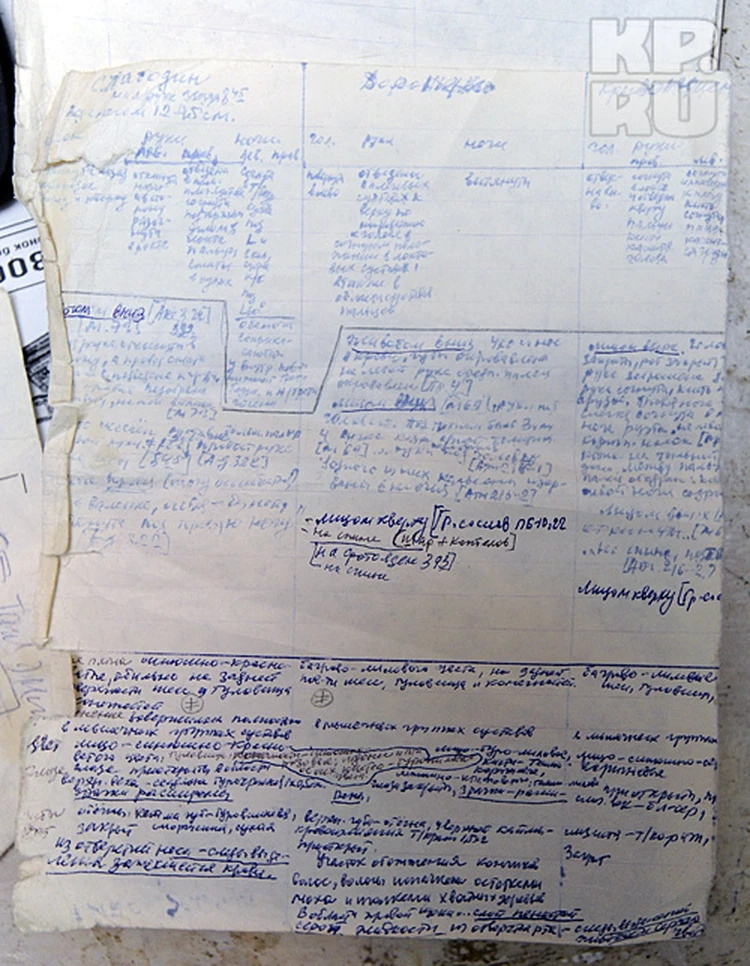 Yuri Yudin's notes that our correspondents found in his apartment

Here are some of the more interesting ones:

"The legs are bare, not damaged, not torn to blood (1.85 km through the snow and stones and the socks are intact!), and then so much work by the fire!" It is obvious that Yuri Yudin wrote these lines about the deceased Doroshenko and Krivonischenko. He couldn't understand how the guys went from the tent to the cedar without shoes, without injuring their feet on sharp stones, without tearing their socks. After all, according to the official investigation, the hikers scrambled in the dark.

Below is the following entry: "it is said that the flooring was made with fir branches, but in fact there were only spruce trees around." It is written in the criminal case that the searchers found a flooring made of fir branches in the Lozva valley, but only the tops of some spruce trees were cut nearby. Another mystery. [You think everyone can tell the difference?]

And, finally, here is such a mysterious line: "Academician-rocketeer Raushenbakh: the explanation must be sought in the military department, the main directorate of the strategic missile forces."

In his notes, Yudin did not just compare the facts, he drew up his thoughts in whole tables in which he scrupulously analyzed the data of the forensic medical examination. Moreover, he compared these data with the testimony of searchers in radiograms.

For example, it is known that the body of Zina Kolmogorova was described by a forensic expert as "a corpse without obvious injuries", and Yuri Yudin found a radiogram from February 27, 1959 by the head of the search, Maslennikov, which says: "Zina has a broken head. She didn't live long *". [This is not in the radiogram Case file 146] 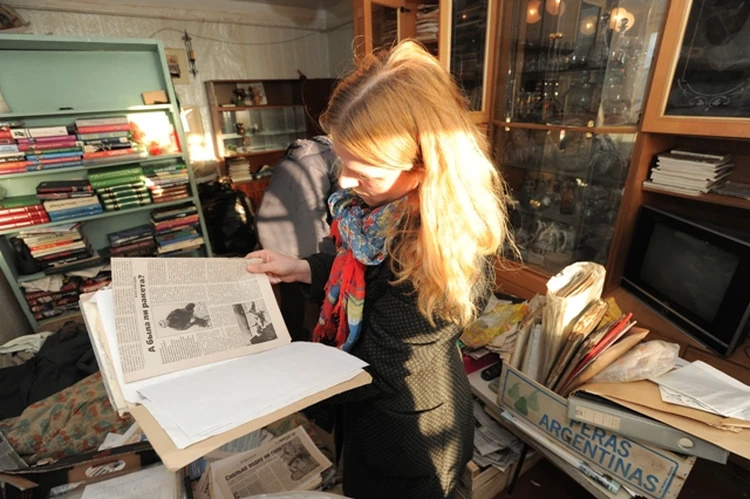 The KP correspondent helped sort papers in the apartment.

So far, this is all that we managed to see and photograph in the apartment of the deceased. Fortunately, these records lay practically in the open. So far, no one has the right to open the cabinets and mezzanines of the deceased owner. It is known that Yuri Yudin's personal life did not work out - because of that tragedy or for other reasons - it is not our place to guess. His modest inheritance - old furniture, heaps of papers and three cats - he never bequeathed to anyone. And the closest relative of the deceased is now Yudin's cousin-nephew. According to the law, the nephew will be able to enter the already sealed apartment only after six months. It is possible that then some more and more interesting documents on the death of the Dyatlov group will be found. After all, Yuri Yudin devoted his whole life to investigating this tragedy. 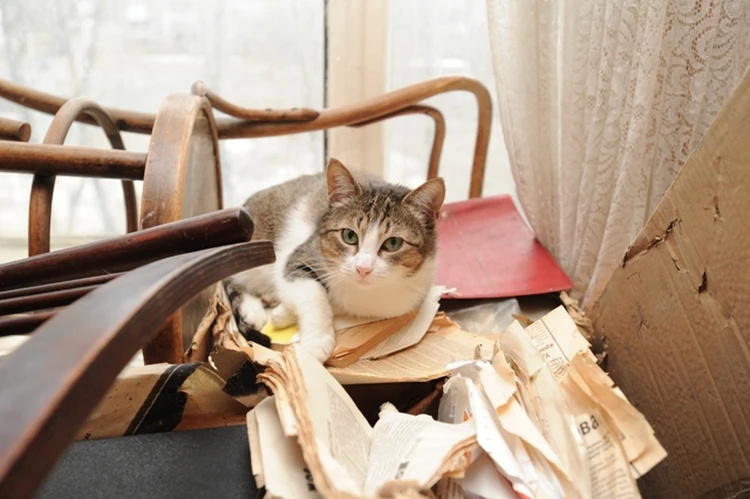 Yuri Efimovich was very fond of cats. He had three. Now they don't have a home anymore.

Yuriy Efimovich was involved with the hiking club "Polyus" in Solikamsk: its members went on difficult hikes on the water, in the mountains… The hiking club has has now closed doors for almost twenty years. But Yudin, until he fell ill, came almost every day to the "Polyus" building. There are still old dusty maps, wooden kayaks, canvas tents… 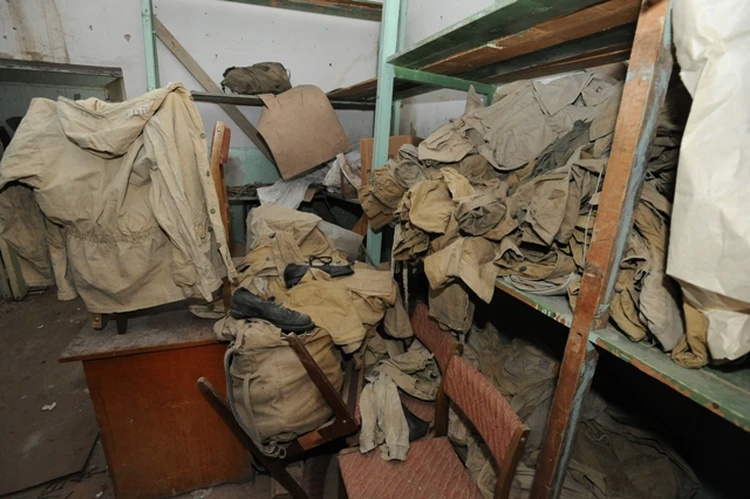 In the former hiking club "Pole"