On March 14, 1959, the prosecutor of the Prosecutor's Office of the city of Ivdel in the Sverdlovsk Region, Jr Counselor of Justice Tempalov interrogated in the office
as a witness, in compliance with Article 162-168 of the Code of Criminal Procedure of the RSFSR

They stayed in Burmantovo with his uncle for a few days and then went to visit their relatives in the village of Suevat-Paul, which is 40 km away from Burmantovo to the north. Bahtiyarov Pyotr Yakimovich returned to the village of Burmantovo on 16 /II-59. This I know for sure.

The fact that Bahtiyarov Pyotr and Nikolay were visiting Burmantovo, as well as in the village of Suevat-Paul for about 8 days, I know for sure. February 17, 1959 at about 10 am Pyotr Yakimovich Bahtiyarov came to my office to ask me for old newspapers in order to smoke. I gave him newspapers. We talked about the fact that about half of his deer -

herds died and every Mansi in the Ural mountains lost about a half of their reindeer herd, because of the disease called "kopytka" (necrobacteriosis - ed. note) and the dead deer attracted wolves and now there are a lot of wolves on the Urals in the winter and these wolves attack the living deer and wounded them. He said whose and how many were the deer that were attacked by wolves. Pyotr Bahtiyarov said that these deer were at about 40-45 km from his yurts and the distance from Pyotr Bahtiyarov yurt to North Toshemka river is 20 km.

Pyotr Bahtiyarov also spoke about a mountain where somebody was blown away from, but who was that he didn't know. I asked how he knew about that mountain. He said that this mountain is located 40 km from their yurts. His father was a shepherd in the Urals and told that one man had been blown off this mountain. Pyotr Yakimovich said that he heard this from his father Yakim Ivanovich Bahtiyarov, who died in 1939 and was buried. Pyotr Bahtiyarov didn't say he saw himself a man being blown off the mountain. I don't know anything about the missing hikers and Pyotr Yakimovich did not mention them to me. I learned about the missing hikers and the search for them in the executive committee of the City Council

On 28/II-59 Deputy Chairman of the Executive Committee of the City Council comrade Karandashev V.N. asked me about the missing hikers. On 7/III-59 I told him that on 17/II-59 Bahtiyarov P.Y. told me about a man being blown off the mountain. Comrade Karandashev did not ask me when he was blown off and I did not say. And if he were to ask me when and where it happened, I would have told him that this was heard by Pyotr Bahtiyarov from his father who died in 1939.

I don't think that Mansi attacked the hikers and killed them. I live in the village of Burmantovo since 1945 and there hasn't been a single case that they attacked Russians and haven't hear any threats from them, although I almost forcibly took their children from them to study at school or to go to the hospital. I personally know of cases when Mansi froze to death by their dead reindeer. There were such cases. It happened in 1947. Often Mansi were hired by geologists and never had anything bad to say about them. I know that the Mansi prayer mountain is in the upper reaches of Vizhay river, and not in the upper reaches of Lozva.

I can not add anything more, it is written correctly, I personally read it. 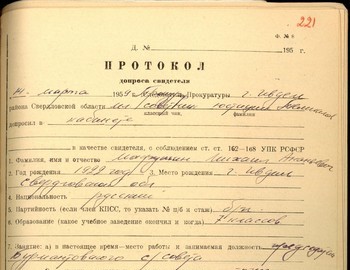 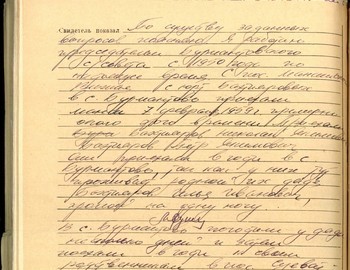 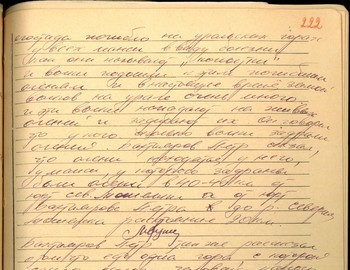 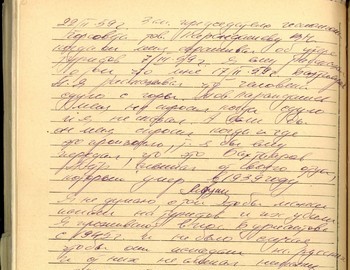