March 16, 1959 Prosecutor of the Prosecutor's Office of the city of Ivdel, Sverdlovsk region, Jr Counselor of Justice Tempalov interrogated in the office
as a witness, in compliance with Article 162-168 of the Code of Criminal Procedure of the RSFSR

The witness testified: Answering the questions at hand. I live 25 km north from Petr Yakimovich Bahtiyarov Petr yurt on the North Toshemka river. Hikers passed through our yurts twice. Once we were not at home and 2nd time I was at home. There were 12-13 people of the hikers the last time. Before that the hikers were with us on 1/I-1959 On the fact that the hikers were lost I heard on 1/III-1959 when they recruited people to go look for the hikers. I am not aware of their route and how did they get lost. Prayer mountain is 30 km from us in the upper reaches of Vizhay river. 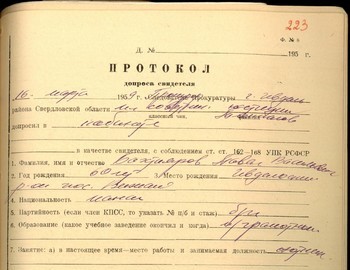 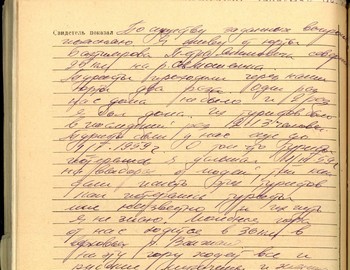