I, Karelin V. G., I am a public worker in the Sverdlovsk sports club (Deputy Chairman of the club), I have category I of sports hiking.

I learned about the preparation for the Dyatlov group's campaign in early January 1959. Dyatlov came to me for a map of the area of ​​the expedition and told me about the route. In addition, through me, Dyatlov took out a paper from the City Physics Committee with a request to give a leave to one of the comrades working at the plant. I did not know the full composition of the group. Before going on the hike, I knew that with Dyatlov went Kolmogorova, Doroshenko, Kolevatov, Slobodin. These people in terms of hiking qualifications, experience in traveling, fully meet the requirements for participants in hikes of the third category of difficulty. All of them were physically strong, morally stable. During the preparation I met Dyatlov twice in the hiking club, where he came to approve the route.

The route of the Dyatlov group seems to me to be a normal "medium" difficulty hike and could be possible to trek in February. This statement is based on personal experience. From February 9 to 24, 1959, I traveled with a group of hikers from Sverdlovsk in the same area as the Dyatlov group, but 50-60 km to the south, and the hike was also the third category of difficulty. We made an ascent to Oyko-Chakur, which the Dyatlov group was supposed to climb at the end of their route. We also had bad weather, but it was not an insurmountable obstacle.

Dyatlov group was familiar with the area of ​​the hike and its peculiarities, because in

May 1957 Dyatlov led a group of hikers from UPI in the area where were we went. We took their note from the top of the mountain Yalking-Nier (Molebniy stone). Dyatlov went with Kolmogorova and Thibeaux-Brignolle in 1957.

In connection with the death of Dyatlov group I should tell you about the unusual celestial phenomenon, which we observed in our expedition on February 17, 1959 on the watershed ridges of the North Toshemka and Vizhay rivers. Around 7:30 am Sverdlovsk time, I was awakened by the shouting of people on duty preparing breakfast: "Guys, look, look, what a strange phenomenon!".

I jumped out of the sleeping bag and ran out of the tent without shoes in some woolen socks and, standing on the branches, saw a large bright spot. It grew. In the center of it appeared a small star, which also began to increase. This spot moved from the northeast to the southwest and fell to the ground. Then it disappeared behind the mount and the forest, leaving a bright strip in the sky. This phenomenon produced a different impression on different people: Atmanaki said that it seemed to him that the earth would explode from a collision with another planet; to Shavkunov this phenomenon seemed "not so frightening", and it didn't make any special impression on me - the fall of a large meteorite and nothing more. All this phenomenon took place just over a minute.

To search for Dyatlov group we came from Serov, where we

arrived, returning from our trek. In Serov we found out about the trouble in the dining room from an occasional visitor who asked us: "You don't happen to be from UPI" He informed us that some group of hikers from UPI was missing. We called Sverdlovsk and Ivdel and received an order to go to Ivdel, where we arrived by train on February 25 at 11 am. We were dropped by helicopter to the tent found on the night of February 27. Leaving our backpacks on the pass where the helicopter landed us, two of us went down to the valley of Lozva to look for a place for the camp, and another two went with two guides and two dogs to the tent, and then to search further. This day four bodies were found: Kolmogorovа, Dyatlov, Krivonischenko and Doroshenko, the latter we first confused with Zolotaryov, because his face was covered with snow, and only later we identified the fourth body as Doroshenko.

The next day the tent of the Dyatlov group was dismantled and three bodies were taken to the pass. Dogs did not find anything else. Further searches were conducted with the help of metal probes. Slobodin was found during a detailed survey of the area where the remaining bodies were located. On March 10 our group was withdrawn from search operations.

My subjective considerations about the death of the group are as follows.

Pitching the tent above the forest boundary was a mistake, their unwillingness to descend into the forest, and then climb back, so they can walk on ice crust, where movement is greatly facilitated.

After pitching the tent the group began to settle down for the night and prepare a cold dinner. At this time they were frightened by something, they all jumped out of the tent barefoot. The people that Dyatlov group consisted of Dyatlov, could frighten only something very extraordinary. The whistling of the wind, the noise, the heavenly phenomenon, even a single shot could not scare them. Although I can not say and vouch for this for Zolotaryоv, since I don't know him at all. And in general, his appearance in the Dyatlov group seems unnatural to me. Traces of those who escaped from the tent were clearly seen on the slope of the mountain. At first they were about 8-9, then they became fewer and soon they completely disappeared.

Probably people in the dark were confused and not all gathered at the fire. Having made an attempt to build a fire that could not save them because of the small amount of firewood, they decided to make their way to the tent. Positions of Dyatlov, Slobodin and Kolmogorova show that they were going back to the tent. The other four probably were not at the fire or came to it later, when Krivonischenko and Doroshenko were already frozen. To go far these four could not without skis.

The solution of what happened can, perhaps,

be explained after finding the last four missing people.

In conclusion, I would like to note that in principle, only an armed group of at least 10 people could frighten Dyatlov's group, although no facts of the presence of strangers were found at the scene of the incident.

The protocol was written by myself, V. Karelin (signature)
Interrogated (signature) 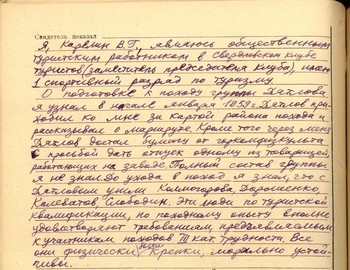 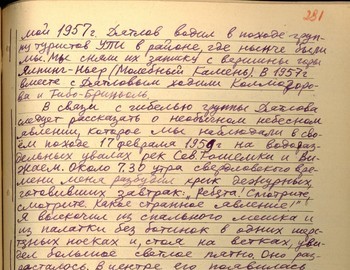 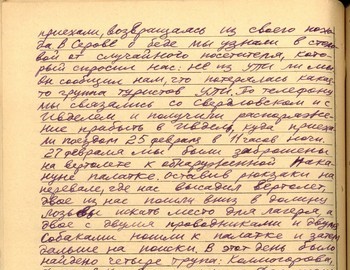 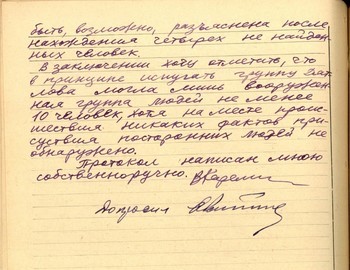