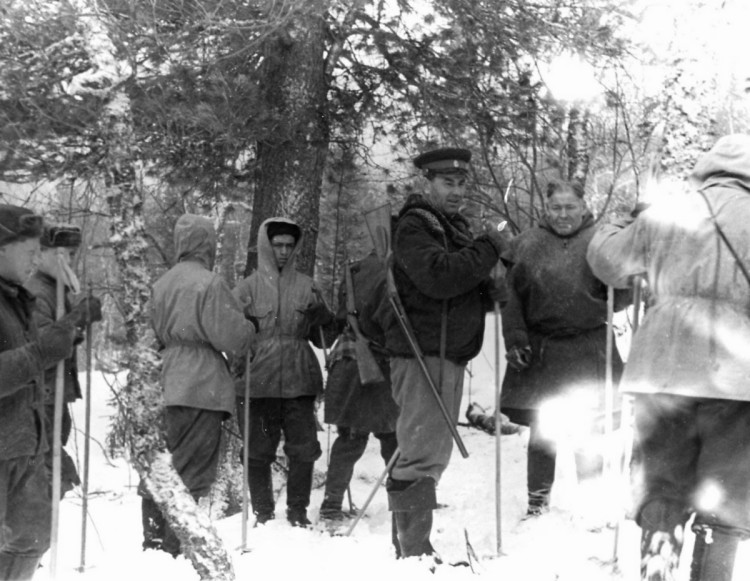 When they dropped us off with helicopters, we brought with us a large number of products. We did not starve. Ortyukov, as a military man, created the institute of orderlies to prepared food, for which they were released on that day from searches.
I remember the feast of the 1st of May. Ortyukov was persuaded to give us two days of rest, explaining that even the slaves in ancient Rome were given rest days. He agreed. He didn't have a choice. He himself was tired to death. After all, in addition to physical exertion, he had a load of very serious responsibility. The authorities constantly pressed for results. At this time, I suggested to Nikolay, the supervisor of the soldiers, to keep watch, so he can give rest to others.
We arranged a holiday dinner. Here is a photo with me holding a partridge in my hand. 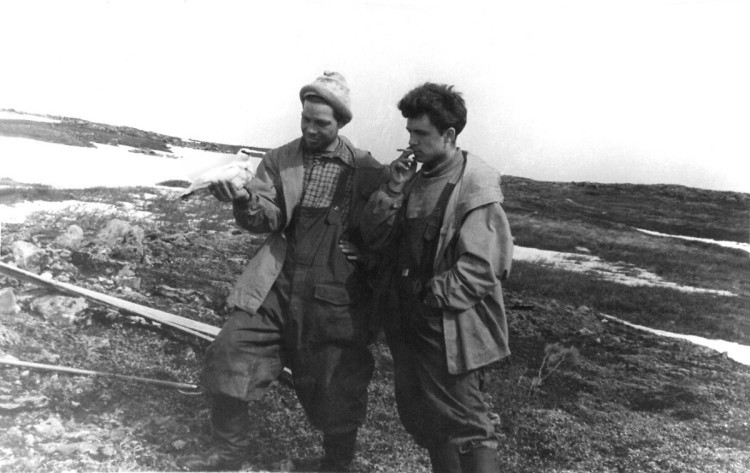 We beat the partridge directly with ski poles. These animals are absolutely not frightened! All the dead birds were kept in the snow until the holidays. We killed near dozen. 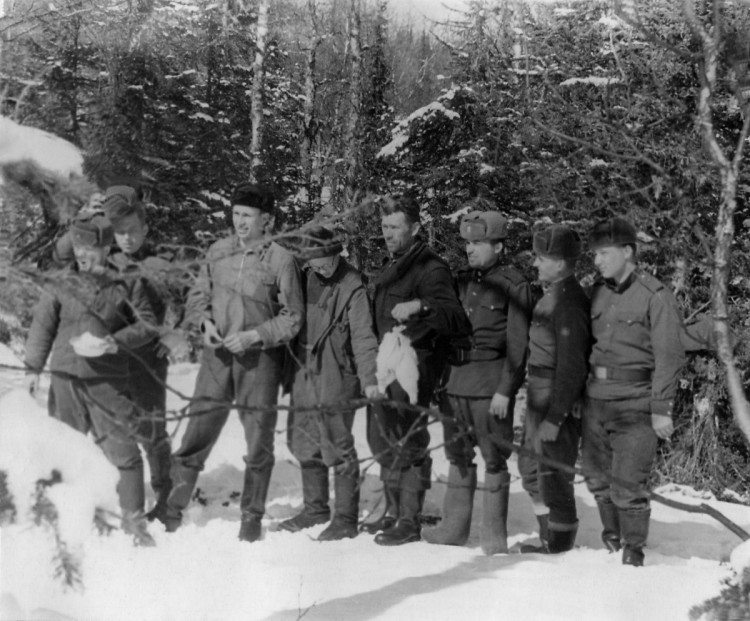 And here is a recipe for Otorten roast: take 1.5 kg of butter, melt it in a bucket (preferably not zinc), wait until when you throw a piece of meat it starts sizzling, put into the oil the whole gutted partridges. If the oil doesn't cover all the meat, add the required amount. The result is partridge fri (fried - ed. note). Everyone liked the dish. 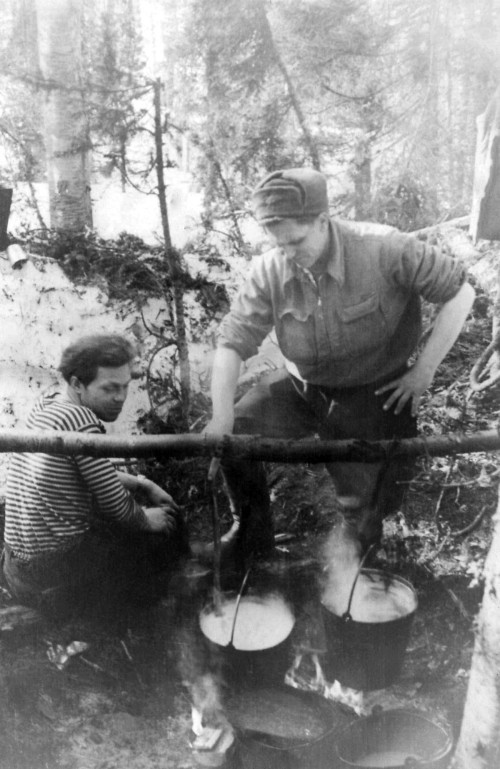 We tried again, this time with a grouse (that Kurikov caught - ed. note), and the result was as good. 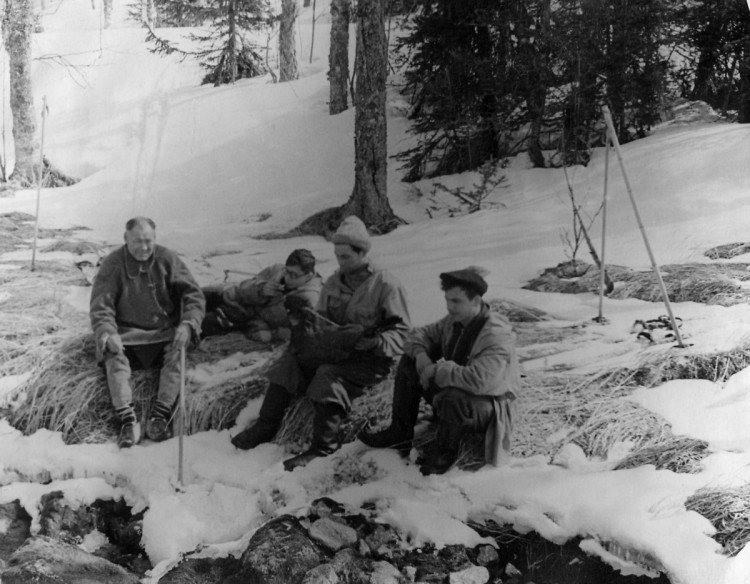 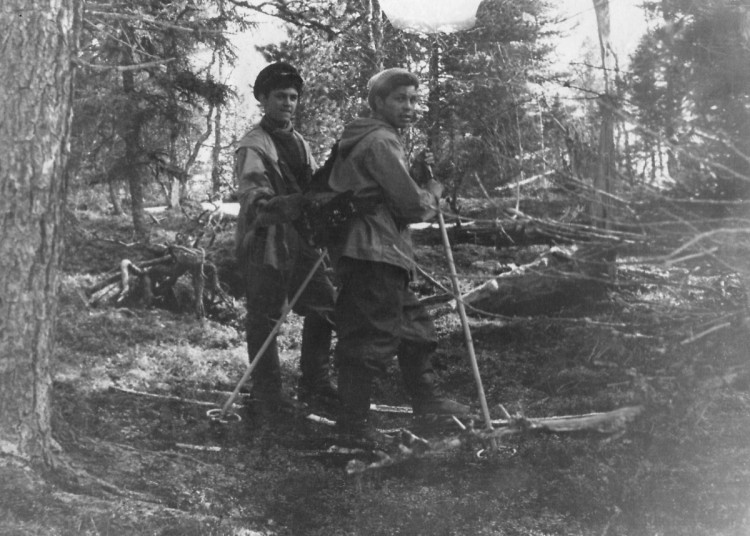 A grouse shot an hour ago dangles on Askinadzi back. Boris Suvorov and Vladimir Askinadzi at upper part of Lozva river.

But after dinner, we were on our own. Our dog breeder, who didn't have a dog, therefore slept for days, was very fond of telling anecdotes, and his bed was in the far corner of the tent. He liked telling anecdotes, but could not. A good anecdote can knock you down with one sentence, and his jokes could last for half an hour. After a while he got on our nerves and we had no more patience. We called at him "shut up !!", but he is like deaf, continues to babble, like a chanter. He scrupulously described the clothes of the characters taking part in his story, what was the weather. In general, he got fed up with him. When we couldn't stand his jokes no more, somebody, and sometimes I, grabbed a felt boot and threw it into the dark corner. It was impossible to miss. It you threw the felt boot hard enough into the side of the tent, it slid down on the wall right onto the narrator. This wasn't pleasant to those who lay closer to him, that included Ortyukov. 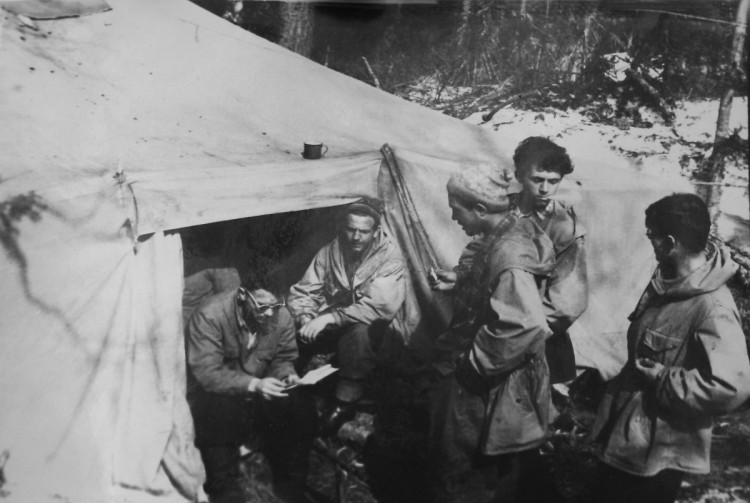 Then in the evenings, we got tired, of course, and after dinner fell fast asleep without dreams. We were young! 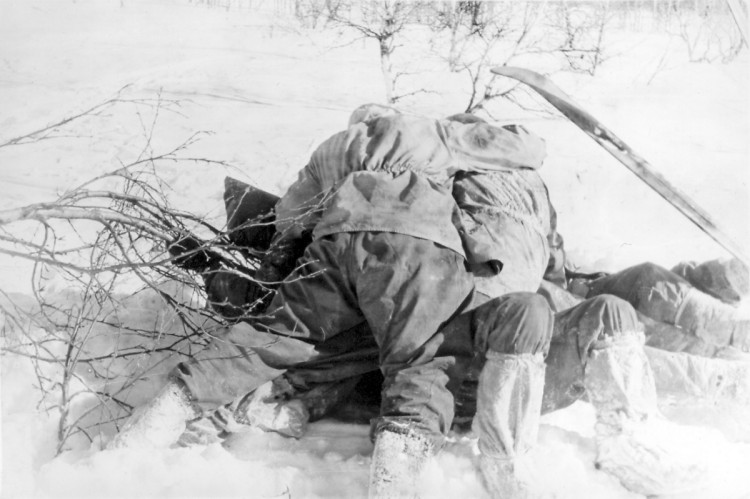