There is another big mystery in the Dyatlov case to which many researchers for some reason did not pay attention, and this is the behavior of two searchers: local forester Pashin and his friend Cheglakov, that conducted themselves strange at the least. 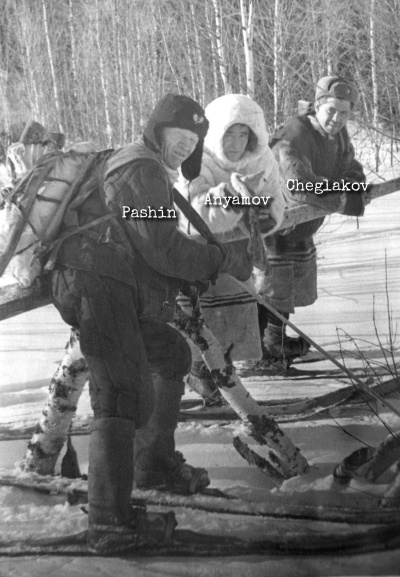 It is well known fact that Dyatlov group tent was discovered by students Boris Slobtsov and Mihail Sharavin on February 26th.

According to Boris and Mihail, that day, together with Pashin, they went out to the side of Mount Kholat Syakhl and saw the tent from afar. Pashin said he was tired and did not approach the tent. And the students rushed briskly to this long-awaited find. In the same place on the roof of the tent, they found a flashlight that lit when turned on. They also found an ice ax with which they opened the tent and saw things that were randomly laid out in it: clothes, shoes, blankets, etc. The students told the investigator about all this, found on February 26, and he recorded it. 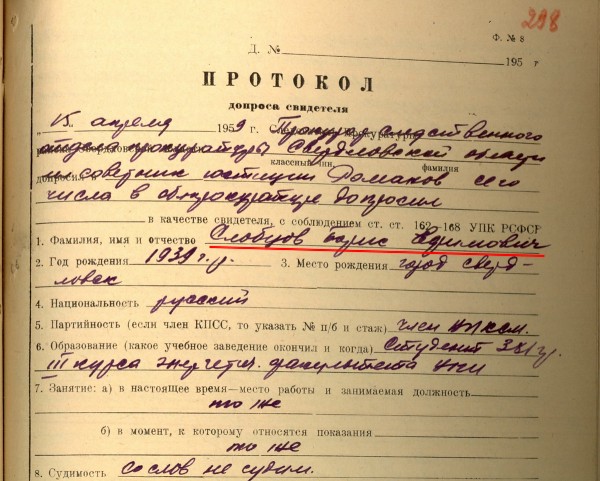 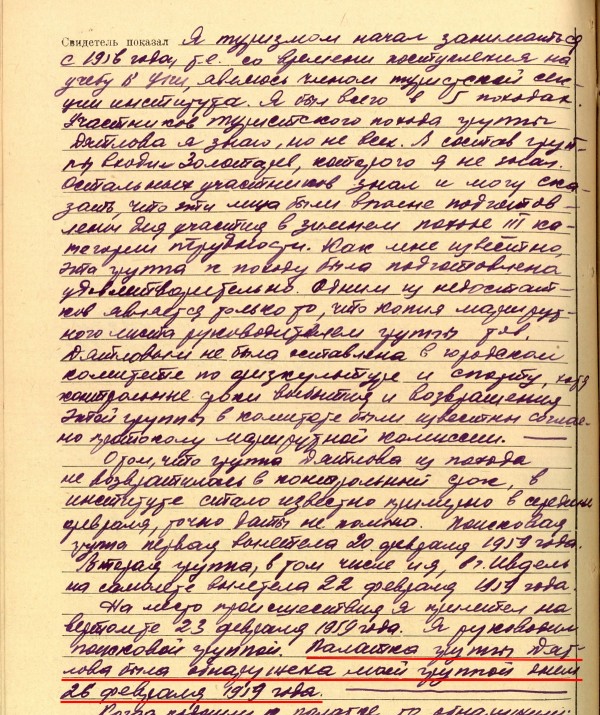 But! if we read carefully the testimonies of the forester Pashin and his friend Cheglakov, we will be surprised.

This is what witness Ivan Pashin says to the investigator on March 7, 1959. Punctuation saved.

"On February 23, 1959 6 of us were dropped off from a helicopter in the area of Mount Otorten ​​to look for the lost group of hikers. On the first day of the search, once descended into the Auspiya we found ski tracks from the hikers. Here we pitched a tent, spend the night, divided into three groups and went to look for the hikers, as a result of the search we found a tent with belongings that was not clearly seen since it was covered with snow, we did not go into the tent." 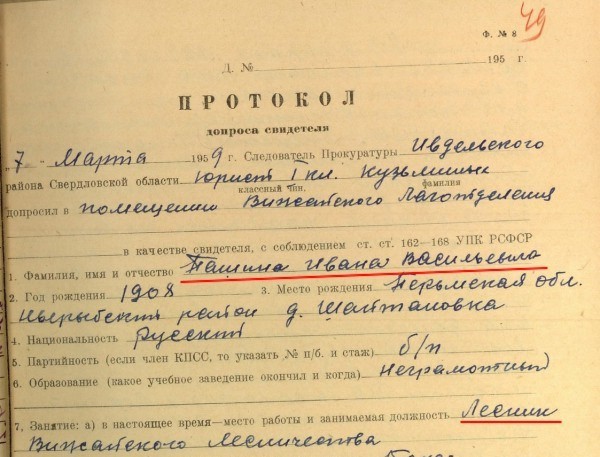 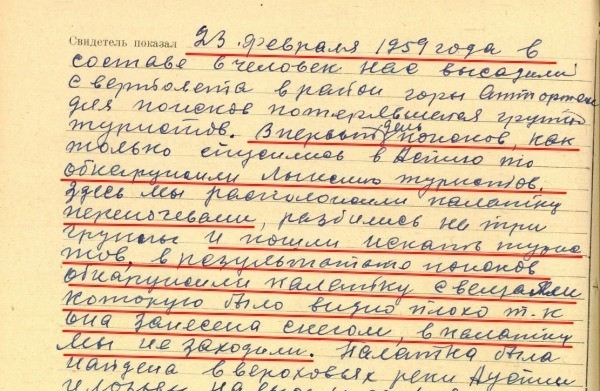 It turns out that Pashin and Cheglakov discovered the tent on February 24th! We read further: "The tent was found in the upper sources of Auspiya and Lozva at the height of the mountain Verhuspiya. When we went down from Mantveevska Parma we saw a wide ski trail that followed a trail of a moose. The Mansi ski trail was 10 km from the tent of the hikers and there were no ski tracks near the tent, Mansi or hikers, since the tent was drifted with snow."

And how to understand this? Pashin and his friend find the tent, which at the same time and in the same area dozens more people are looking for. But Pashin and Cheglakov, without even looking into the tent, pass somewhere further. They did not even return to the camp to report the finding (?!).

"On the fifth day of our search (Feb 27) we found 4 bodies covered with snow and on this day we were taken back home with helicopter to the village of Vizhay."

And this is what Cheglakov told the investigator on March 6. Punctuation saved.

"At the end of January 1959 the exact date can not remember, I saw at the club in village of Vizhay a group of hikers, among them there were 2 girls. These hikers left in a truck to 41st district of the Forestry Energolesokombinat. No one lives in the village of 2nd North mine. In the third week of February 1959 on the orders of the Chief of the logging branch Hakimov, together with the forester Ivan Pashin I flew by helicopter to the site of the death of a group of hikers near Mount Otorten. With us together in the same helicopter were 4 people and from Ivdel the same day came another 5 people. We started to carry out the assigned tasks same day we arrived. The search of the hikers started in two groups (Pashin is talking about 3 groups - ed. note). One person left on the protection of belongings and tents. On the first day of our search we found the ski tracks of the hikers. On the second day we found the tent of the hikers which was located in the upper reaches of rivers Auspiya and Lozva at the height of the mountain verhuspiya."

Cheglakov, like Pashin, claims that they found the tent on the second day of the search, that is, on February 24!

"It was badly drifted by snow. We did not go inside.
We couldn't see any ski tracks of the hikers around the tent. Mansi ski tracks we have seen 10 km from where the tent of the of the hikers was found. One kilometer from the camping site of the hikers we found new Mansi stand.
... On the fifth day of searching we found 4 bodies, one of them female. After that we were taken home by helicopter to village of Vizhay."

Unbelievable! Pashin and Cheglakov didn't tell anybody about this essential finding neither on February 24, returning to the base camp, nor on February 25, nor on the 26th, everybody else in the search party is looking for this tent, and they both say nothing to nobody. And, judging by the protocol, even the investigator doesn’t have any reaction to that. Maybe someone gave instructions to Pashin and Cheglakov ahead of time not to tell anyone about the tent, and the investigator knows this? This is where modern conspiracy theorists come in.

M. P. Sharavin, who found the tent and the cedar 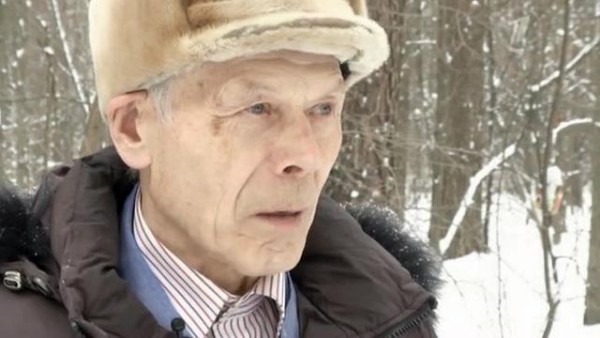 Mihail Sharavin - member of the search in 1959 for Dyatlov group

There is no testimony from Sharavin in the case files. The thing is that Ivanov didn't question their observations, and they flew off on something like 28-29 Feb 1969. There were two groups: 1) Akselrod; 2) Slobtsov. They round up the leaders of the winter treks of 1959. Slobtsov just came back from Taganaya (12 Feb), Akselrod + 5 per joined first, they should have gone to Otorten, same as the Dyatlov group final destination. Next was Slobtsov group landing at 3 PM on 23 February on the eastern slope of Otorten. Akselrod verified that there is no note left on Otorten (meaning Dyatlov group haven't been to Otorten - ed. note), and the search group headed back to the route. Overnight with a stove on the 4th tributary to Lozva river. On the second day crossed Dyatlov group ski track (i.e. 24 Feb) on Auspiya, they spent the night there, snow cover was 180 mm on the ski track. Went along 4th tributary rather than on the ridge, since the chances that there will be ski tracks on top are slim.

On the morning of the 25th, divided into groups, Sharavin + went to the pass, the rest in the radial direction to do a search.

Slobtsov and Sharavin went down the slope, the track was visible to the tree line, then it was lost and appeared sporadically.

To the end of the forest, the snow was quite loose. We started at at 9-10 AM. The boot rock (now called the monument - ed. note) was visible, we went to it. A firefighter* from Ivdel walked with them, he said that he was unwell and could not walk, and then they had to go in the direction of the lake near Otorten, because when you look from Otorten, the deer below look like small dots. At one point, Sharavin looked around and saw a black speck on the slope. It was getting dark, 5 PM. They went closer - a tent, a ice ax was stuck next to it and there was 1 pair of skis.

Helga (Yeah ... It took them from From 9 AM to 5 PM to climb with no weight from search camp to tent, and there are so many questions about why did Dyatlov group with load and everything cover so little distance that day.)

When they try to cut through the firn with an ice ax in the hope of finding someone, apparently damaged the tent.

E.G. (No word about that in the tent examination!)

They found jackets, boots (8 pairs). Where was the tent? 800 meters from the tree line, above the boot rock, where they found Zina. They cleared 1/3 from the firn. At the entrance lay a camera, baked ham, in large pieces. (By the way, why didn't the animals eat it, were the animals killed too? E.G. )

A flask of alcohol, a stove completely disassembled, a group diary, a flashlight, blankets, backpacks were spread out. In the stove, there were logs 40-50mm in diameter, there was not much firewood - it was kindling. Ran back, taking the flask, diary.

P.S. The way the tent was set up could only be done by the hikers themselves - backpacks neatly spread out - if you are not a mountaineer you can't put it that way.

It was obvious that the tent was set up slowly, securely, neatly. The pipe from the stove did not stick outside.

We went down for the night, opened the stove, drank alcohol. Someone (Halizov) came out at night, stumble, tripped over the rope, twisted the prusik, the smoke went into the tent, some jumped out, some were breathing inside the tent. The fireman went out and slept by the fire. There was so much confusion. 26 Feb

The next morning, February 26th. They were going to climb Auspiya to bring down the tent in Lozva valley. What for? Footprints ~ 25 m were leading down from the tent (we did not go further). Traces began at 2-3 m from the tent, a few tracks. How many? I didn't count. How did the footprint survive? The track is trampled, the loose snow around is blown out, there remains a pedestal of snow.

Why go up the slope? There is a flat area, you can conveniently pitch the tent there.

There were no signs of a missile breaking nearby, there was no damage..., a burnout line, no trace of extraneous presence.

We went to the boot rock, saw a cedar down in the ravine, we went there. There was the body of Doroshenko covered with a blanket. Dropped the backpacks and ran up in horror - on the pass a helicopter was landing with searchers and a rescue dog.

The ground under the cedar tree was bare, 80 мм diameter, because the area is elevated, there was a small fire. This could be called an attempt to make a fire. There were a few limbs and coals, it was incomprehensible - how could this fire ever burn? On such a windy place. It was clear that Doroshenko was put there, in underwear, half-dressed, covered, his hands were burned while trying to warm his numb fingers. Did he put his hands in the fire?

Nothing but a blanket around the fire was seen, a dark brown blanket. How could they make a fire? There were no traces of birch trees, they kindled them with thin dry branches ... From the cedar (below) the branches were broken so that you cannot reach with your hand.

Krivonischenko: lay next, because the spot was one. It was evident that they could not carry them away. Why? Came to choose a place, and there the bodies!

Doubt: whether Ivanov was there at all, most likely not, they were picked up and carried. Carried on hand! No one went to the tent, Sharavin approached the helicopter, another went to meet the group to report.

Mansi came on the 26th, with a radio operator, on deer. Therefore, on the 26th were reported in the morning by radio, the helicopter had already landed on the radiogram.

There was the impression that the tent was cut from inside; we didn't find a knife in the tent.

They decided to go to bed without the stove - it was not taken out of its case.

The first group was immediately evacuated: they were mentally traumatized 29 Feb

P.S. Firefighter: He couldn't ski well, didn't know the terrain, as a guide was very inadequate, pretended to be sick on the pass, behaved strangely, didn't have a map, he was hanging around without work. There was an opinion that he was a strange bird. Weirdo!

P.P.S. So, testimony was taken only from the leaders of the group? Absurd.

*Sharavin is confusing Pashin’s occupation to be firefighter when he is a forester - ed. note