The day Russia nuked itself: The Kyshtym disaster 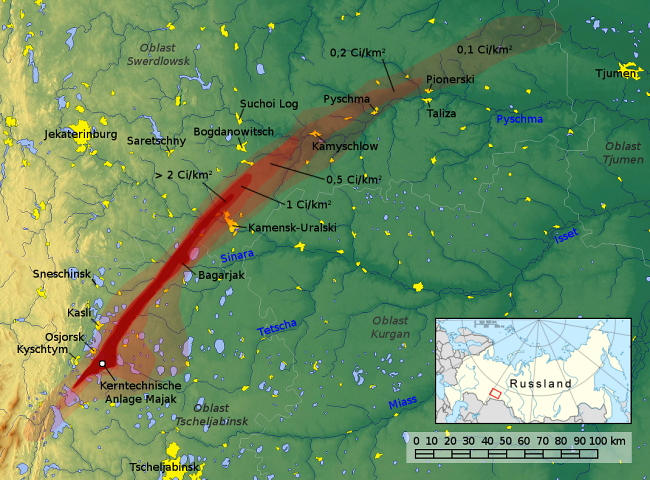 The Kyshtym disaster was a radioactive contamination accident that occurred on 29 September 1957 at Mayak, a plutonium production site for nuclear weapons and nuclear fuel reprocessing plant in the Soviet Union. It measured as a Level 6 disaster on the International Nuclear Event Scale (INES), making it the third most serious nuclear accident ever recorded, behind the Fukushima Daiichi nuclear disaster and the Chernobyl disaster (both Level 7 on the INES). The event occurred in the town of Ozyorsk, Chelyabinsk Oblast, a closed city built around the Mayak plant. Since Ozyorsk/Mayak (named Chelyabinsk-40, then Chelyabinsk-65, until 1994) was not marked on maps, the disaster was named after Kyshtym, the nearest known town.

After World War II, the Soviet Union lagged behind the US in development of nuclear weapons, so it started a rapid research and development program to produce a sufficient amount of weapons-grade uranium and plutonium. The Mayak plant was built in haste between 1945 and 1948. Gaps in Soviet physicists' knowledge about nuclear physics at the time made it difficult to judge the safety of many decisions. Environmental concerns were not taken seriously during the early development stage. Initially Mayak was dumping high-level radioactive waste into a nearby river, which flowed to the river Ob, flowing further down to the Arctic Ocean. All six reactors were on Lake Kyzyltash and used an open cycle cooling system, discharging contaminated water directly back into the lake. When Lake Kyzyltash quickly became contaminated, Lake Karachay was used for open-air storage, keeping the contamination a slight distance from the reactors but soon making Lake Karachay the "most polluted spot on Earth". 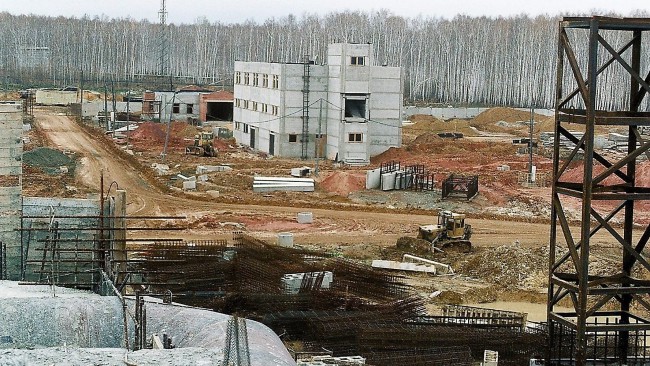 A storage facility for liquid nuclear waste was added around 1953. It consisted of steel tanks mounted in a concrete base, 8.2 meters underground. Because of the high level of radioactivity, the waste was heating itself through decay heat (though a chain reaction was not possible). For that reason, a cooler was built around each bank containing 20 tanks. Facilities for monitoring operation of the coolers and the content of the tanks were inadequate. 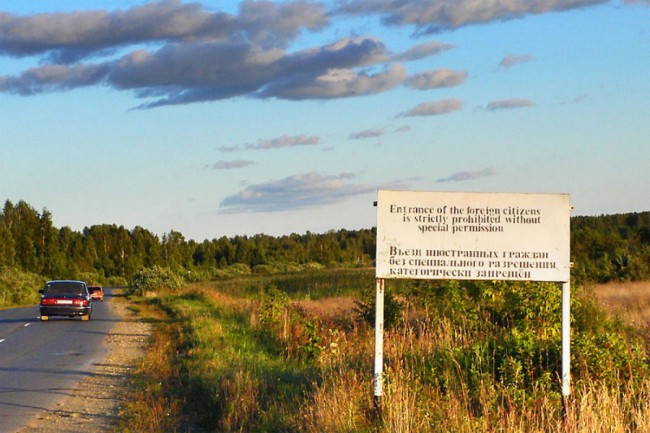 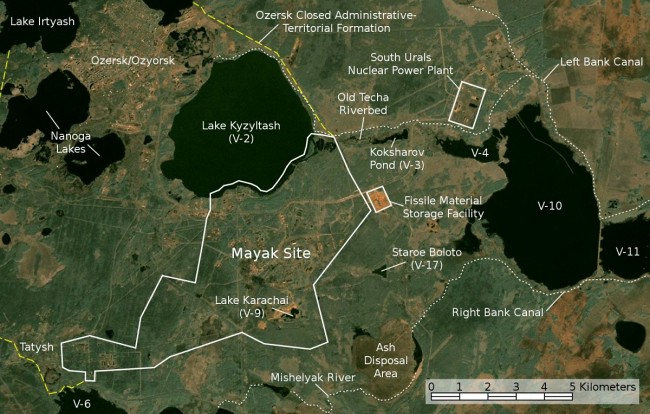 In 1957 the cooling system in one of the tanks containing about 70–80 tons of liquid radioactive waste failed and was not repaired. The temperature in it started to rise, resulting in evaporation and a chemical explosion of the dried waste, consisting mainly of ammonium nitrate and acetates (see ammonium nitrate/fuel oil bomb). The explosion, on 29 September, 1957, estimated to have a force of about 70–100 tons of TNT, threw the 160-ton concrete lid into the air. There were no immediate casualties as a result of the explosion, but it released an estimated 20 MCi (800 PBq) of radioactivity. Most of this contamination settled out near the site of the accident and contributed to the pollution of the Techa River, but a plume containing 2 MCi (80 PBq) of radionuclides spread out over hundreds of kilometers. Previously contaminated areas within the affected area include the Techa river which had previously received 2.75 MCi (100 PBq) of deliberately dumped waste, and Lake Karachay which had received 120 MCi (4,000 PBq).

In the next 10 to 11 hours, the radioactive cloud moved towards the north-east, reaching 300–350 kilometers from the accident. The fallout of the cloud resulted in a long-term contamination of an area of more than 800 to 20,000 square kilometers (depending on what contamination level is considered significant), primarily with caesium-137 and strontium-90. This area is usually referred to as the East-Ural Radioactive Trace (EURT). 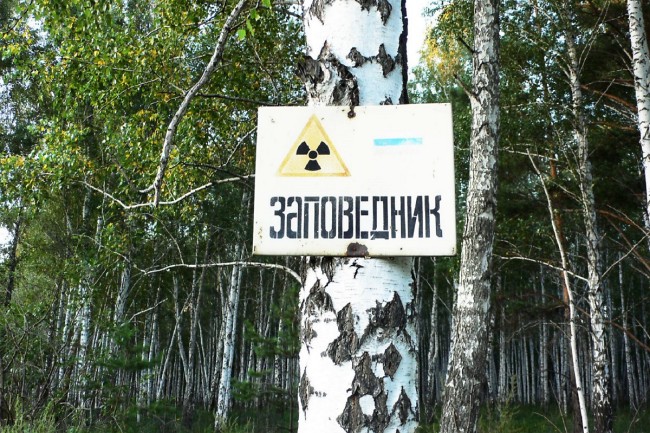 At least 22 villages were exposed to radiation from the disaster, with a total population of around 10,000 people evacuated. Some were evacuated after a week but it took almost 2 years for evacuations to occur at other sites. 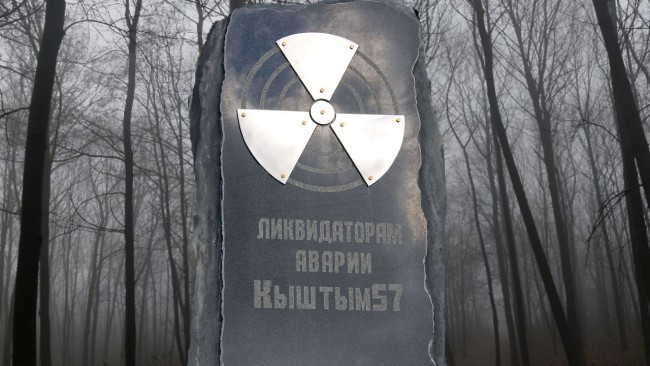 Vague reports of a "catastrophic accident" causing "radioactive fallout over the Soviet and many neighboring states" began appearing in the western press between 13 and 14 April 1958, and the first details emerged in the Viennese paper Die Presse on 17 March 1959. But it was only in 1976 that Zhores Medvedev made the nature and extent of the disaster known to the world. In the absence of verifiable information, exaggerated accounts of the disaster were given. People "grew hysterical with fear with the incidence of unknown 'mysterious' diseases breaking out. Victims were seen with skin 'sloughing off' their faces, hands and other exposed parts of their bodies." Medvedev's description of the disaster in the New Scientist was initially derided by western nuclear industry sources, but the core of his story was soon confirmed by Professor Leo Tumerman, former head of the Biophysics Laboratory at the Engelhardt Institute of Molecular Biology in Moscow.

The true number of fatalities remains uncertain because radiation-induced cancer is clinically indistinguishable from any other cancer, and its incidence rate can only be measured through epidemiological studies. One book claims that "in 1992, a study conducted by the Institute of Biophysics at the former Soviet Health Ministry in Chelyabinsk found that 8,015 people had died within the preceding 32 years as a result of the accident." By contrast, only 6,000 death certificates have been found for residents of the Techa riverside between 1950 and 1982 from all causes of death, though perhaps the Soviet study considered a larger geographic area affected by the airborne plume. The most commonly quoted estimate is 200 deaths due to cancer, but the origin of this number is not clear. More recent epidemiological studies suggest that around 49 to 55 cancer deaths among riverside residents can be associated to radiation exposure. This would include the effects of all radioactive releases into the river, 98% of which happened long before the 1957 accident, but it would not include the effects of the airborne plume that was carried north-east. The area closest to the accident produced 66 diagnosed cases of chronic radiation syndrome, providing the bulk of the data about this condition.

To reduce the spread of radioactive contamination after the accident, contaminated soil was excavated and stockpiled in fenced enclosures that were called "graveyards of the earth". The Soviet government in 1968 disguised the EURT area by creating the East Ural Nature Reserve, which prohibited any unauthorised access to the affected area.

According to Gyorgiy, who invoked the Freedom of Information Act to gain access to the relevant Central Intelligence Agency (CIA) files, the CIA knew of the 1957 Mayak accident since 1959, but kept it secret to prevent adverse consequences for the fledgling American nuclear industry. Starting in 1989 the Soviet government gradually declassified documents pertaining to the disaster.

The level of radiation in Ozyorsk itself at about 0.1 mSv a year is claimed to be safe for humans, but the area of the EURT is still heavily contaminated with radioactivity.

Because of the secrecy surrounding Mayak, the populations of affected areas were not initially informed of the accident. A week later (on 6 October) an operation for evacuating 10,000 people from the affected area started, still without giving an explanation of the reasons for evacuation.