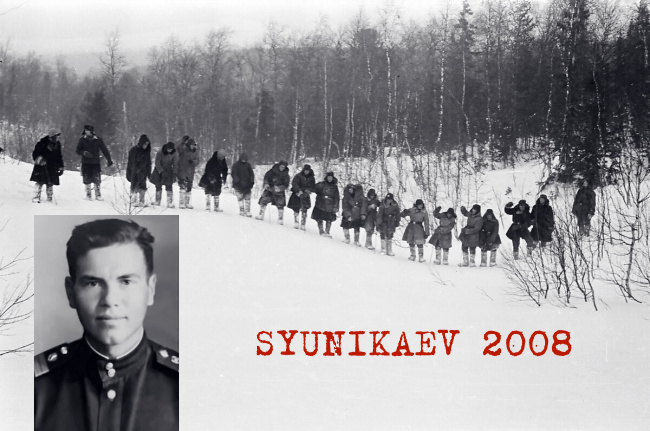 Syunikaev: I am hearing you.

Navig: Well, yesterday we agreed here... Regarding the Dyatlov group.

Navig: Have you prepared anything? Tell me from the beginning.

Navig: Our conversation is being recorded, I will post it on the Internet later.

Syunikaev: Will it be from you?

Syunikaev: In February 1959 my military unit was raised by alarm.

Navig: Do you remember what date was that?

Syunikaev: I don't remember, it was in February, it was very cold...

Navig: Yes, at the end of February, when they found it?

Syunikaev: Yes. They raised us on alarm, and here we are, putting on our boots, grabbing the fur coats, taking the skis, and the transported us to Ivdel .... Yes, yes, a helicopter was waiting for us. Women were standing near the helicopter, crying.

Navig: And who were these women?

Navig: Were the students' parents already in Ivdel?

Syunikaev: Yes! They stood there crying, asking us to find their children. And we kind of took an oath that we will find them!

Navig: How old were you then?

Syunikaev: Thirty-seven, fifty-seven, so... I was twenty-two!

Navig: You studied there?

Syunikaev: I served there, went through the regimental school there.

Navig: And in what rank?

Navig: At the source?

Syunikaev: Yes, at the source.

Navig: This is far away, they died on... Mt Kholat Syakhl...

Syunikaev: On Lozva, and there is Mt Nameless, we had to climb the mountain every morning.

Navig: And, well, it was you who were dropped off not near Otorten, but near Mt Kholat Syakhl. Were there any people there already?

Syunikaev: Right there, they dropped us off, at the source of the river.

Navig: When you went up, there was a tent, correct?

Syunikaev: Yes, the tent was there for a long time, there were these miners before us. There was a platoon of miners, they were searching before us, so they put us in their tent.

Navig: And besides were there any other people?

Syunikaev: There was no one, no one. We... We were not a platoon, but a squad.

Navig: And were there any students?

Syunikaev: No, no, there was no one, no one.

Navig: And how many people were you?

Syunikaev: There were 12-13 of us, with a platoon leader, and a radio operator.

Navig: What was the name of the a platoon commander?

Syunikaev: I don’t know, I don’t know the name of neither the platoon commander nor the radio operator.

Navig: The radio operator was also from the unit?

Syunikaev: Yes, there was a radio operator. They just dropped us off there, the whole thing... we were there... the tent was set up, we brought spruce branches, spent the night, slept in the tent. Here. The first days we could hear cannon fire. Some explosions, God knows.

Syunikaev: Not far, on the left side towards the north, behind the source there, there was a cannonade. We came then, we said to the platoon commander…

Navig: There were explosions?

Syunikaev: Yes! ... They were blasting.

Navig: Could you see the flashes?

Syunikaev: No, we could only hear them.

Syunikaev: We told the platoon commander that we won't stay here. That Moscow should be informed to stop these bombarding. After that, there were explosions for maybe a day, and after that everything quieted down. The radio operator contacted, transferred the whole matter...

Navig: Where did they came from? Your letter you said from the ocean.

Syunikaev: They were shooting from the side of the ocean, from the other side [of the mountain]. And then they stopped.

Navig: And what did you do there?

Syunikaev: We went up to Otorten every morning (1079 ed.), from the tent, and they gave us long probes, we passed the area in formation and probed each section.

Navig: Did you find anyone?

Syunikaev: Not while we were there. Before we came, they said that Dyatlov was found with his wife.

Navig: Dyatlov was not married.

Syunikaev: I don’t know, they told us so. Dyatlov, such a strong, ginger guy, healthy, and on top of him, they say, a woman was laying. Her legs and arms were broken. The guy was dragging her to the tent. They were two hundred meters (650 ft) short.

Navig: Who said that?

Syunikaev: Khanty, Khanty came to us.

Syunikaev: Khanty. They came to us as soon as the plane flew in.

Navig: And, Kurikov?... The name of the Khanty?

Syunikaev: I don't know who, but the Khanty were coming to us all the time. When the plane flew in, they came to us and said "We told them not to go there. Nothing lives there. Deer don't go, there is no sable, no marten. There is nothing there." They say they shoot there.

Navig: The Khanty told you they shoot there?

Syunikaev: Oh well. They say one can't live there.

Navig: Did Dyatlov group met with the Mansi?

Syunikaev: They met with the Khanty. They told them: "don't you dare go there! Go around the mountain"

Navig: And where did they meet with them, in which village?

Syunikaev: I do not know. So, before that, probably somewhere.

Syunikaev: They spent the night, you see, with them.

Navig: There is no such information ... Although [records] skip at one point...

Syunikaev: I'm telling you! Because the Khanty came to us all the time, talked to the pilots, took food and cartridges ...

Navig: They were on ski?

Syunikaev: No, they were on deer. They took alcohol from the pilots. They were rich, brought sand, brought sables... The pilots will give them a liter of alcohol, they will get drunk here (Khanty, editor's note). And the pilots fly away... They lived with us. They fought among themselves. So that's it! Khanty, they took it straight, pilots, it was scary.

Navig: Were they Khanty or Mansi?

Syunikaev: Khanty or Mansi, God knows them. We can't tell who's a woman, who's a man. When they started to fight we separated them! Well, we searched for a month there (on the mountain, ed.)and we didn't find anything.

Navig: And you left?

Syunikaev: Yes, they flew us away by helicopter.

Navig: When you were there for a month, did any people came to you?

Syunikaev: No, there were only pilots.

Navig: That is, you were there for a month with your unit?

Syunikaev: Yes, we were there for a month. We had a platoon leader, we had a radio operator. Once a week, a plane flew to us, they brought food from Moscow.

Navig: Was there Colonel Ortyukov? Investigators?

Navig: They write about him...

Syunikaev: He was a good skier. We all went skiing.

Navig: Have you seen any peculiarities on the slopes? Any traces?

Syunikaev: No, nothing special. Everything there was blown away by the wind. The snow was no longer on the surface where it was [during the accident].

Navig: And there were no traces of the explosion anywhere?

Navig: You went to the other side of the mountain?

Navig: And there were no KGB agents among you?

Syunikaev: How could we know?

Navig: And they were allowed to go everywhere?

Syunikaev: No no no. We were given a course, they will indicate a square, so we take the probes and survey only those places.

Navig: Did you go everywhere in your free time, or was it also limited?

Navig: And who did not let you?

Syunikaev: Yes. I was afraid that we would be killed, and there’s nothing. We were not allowed anywhere. The commander had a gun, well, it was a machine gun, a pistol. And we had nothing.

Navig: It's clear. Do you have any photos?

Syunikaev: No! We were not allowed to take pictures.

Navig: Others have some, they secretly photographed. No, we were not allowed to take anything. That is, you were (inaudible).

Navig: You've been there all March?

Syunikaev: No, we were there in February.

Navig: No, the tent was found the 26th... So you must have been there in March. You were there thirty days.

Syunikaev: Well, I don't remember... Yes, yes, thirty days. We ate cranberries. There were cranberries. They took a submachine gun from the commander, shot partridges. When there is wind, they can't go anywhere, poor things! And that's about it.

Navig: Have they told you anything? About the events there?

Syunikaev: They didn't say anything! Who will tell us anything! Everything is a mystery. A combat mission was given - that's where the corpses are. Look for the corpses, and that's it! And you know what become of our hands from these probes, they were two meters.

Navig: Yes, I've seen them. This year Yuri Kuntsevich, from Yekaterinburg, went to the pass with a group of 10 people. They had a metal detector and they found these probes, some shovels...

Syunikaev: There were sappers there before us. They didn't find anything. They [the bodies] were under the snow.

Navig: Have you seen the tent?

Syunikaev: No, only place... we found a flashlight.

Navig: So it was you who found it?

Syunikaev: Yes. We found pens. Pens, notebooks, well, to write. Everything was blown away by the wind, we were looking for everything there.

Navig: What else did they find?

Syunikaev: Well, we found a flashlight, found a pen.

Navig: Do you remember the flashlight?

Syunikaev: I don't remember... They, poor souls, were naked. My thoughts: there was an explosion, after all.

Navig: And did you see the cedar where they climbed?

Syunikaev: No no. Who would show us? Everything was done secretly, in silence.

Navig: Two were found near the cedar...

Syunikaev: They were found before we arrived and we were not shown anything.

Navig: OK, it is clear. Thanks for the information.

They say their goodbyes.