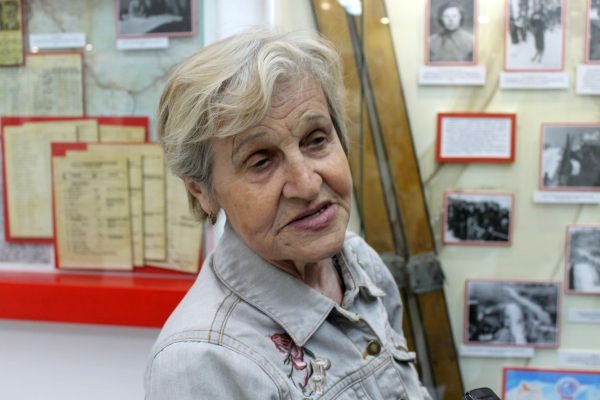 24.03.08
Navig. Oleg Viktorovich Shtrauh gave us such information concerning Dyatlov group that you were then ready to go on the same route, but you received the news that your trek is cancelled.
L.B. Yes, we did not go there, because we were rerouted to Isherim. We wanted to go there, but they did not sign our route papers, they said: "You have no business going there."
Navig. And what date was that? Can you remember?
L.B. Honestly, I don't remember ... I lived in the city of Serov. In order not to drag along with the tents, I took in the military unit and waited for the group from Perm Institute to come to Serov, this way the hiking group would come to me, take all these tents and sleeping bags-all the solder equipment. And they did not come. I came to the sports committee, and they say to me: "The UPI team went already." I say: "They must have, but my group is not here yet." And then I receive a telegram: "The expedition is canceled.If you want to go to another one come back to Perm to and go to Ishirim." I then studied in Perm. I ask: "Why, what's the matter?". "They did not approve the route, they say, there's nothing to do there." Perm club did sign the papers. And we went to Isharim.
Navig. You say that you received a telegram?
L.B. Yes, I had a telegram from my institute. I studied at the Perm Pedagogical Institute. The head of the team, with whom we agreed that they will come to Serov, will take everything from me and we will go together...
Navig. And do you remember his name?
L.B. Well, you, 60 years have passed ... (laughs - ed. note). I do not remember. In a word - I do not know Dyatlov grpup, I did not meet them. They drove on. I was told at the Physical Culture Committee: "They drove in. They went to the committee of physical culture." Here they change transport and headed to Ivdel."
Navig. How long after their departure did you receive the telegram?
L.B. We had to leave at the same time. Vacation was at the same time. The telegram came to me the next day, after they drove away, that the campaign was canceled. The telegram was from the leader of the campaign, he studied physics and mathematics. Now I do not remember any of these guys anymore.
Navig. There was a phrase that Otoren is closed? Oleg Victorovich wrote that...
L.B. I told him that they said to me "there is nothing to there," and our route papers were sign in Perm.
Navig. Maybe it was four days later? After Dyatlov group left (Serov 24 Feb - ed. note), somewhere about four days later they died.
L.B. No, I received the telegram on the second day after they left.
Navig. Was it January or February?
L.B. (thinking - ed. note) The next day, after Dyatlov group drove through Serov, I received a telegram saying that the expedition is canceled.
Navig. This changes matters, it is too early to be related to Dyatlov group.
L.B. No, it's not related.
Navig. Then, could it be because of weather conditions?
L.B. No. They did not sign our route paper in Perm, the Committee on Physical Education or the Committee on Tourism did not sign it, they said: "There's nothing to do". I do not know why. The leader knew, but not me. I returned to Perm, we went to Isharim, and then the studies began. And only then I heard that Dyatlov group died. We found out much later. We didn't know that when the telegram arrived.
L.B. They studied in Sverdlovsk, and I studied in Perm. In Sverdlovsk there was no institute of physical education then, so I went to study at the Pedagogical Institute in Perm, to the faculty of physical education. And there we gather to go on a ski trip. I stock the gear, I knew people from Serov, where I worked before the institute but they did not come. Dyatlov group went a day earlier. On next day I received a telegram saying that the trek is canceled.
Navig. And is there someone else from your group that we can find now?
L.B. Yes, you can.
Навиг. In Serov?
L.B. In Serov I was by myself. I came from Perm in advance, to prepared the equipment, but they (my group - ed. note) did not come... They didn't let us go, and why did they let them go? I said to Oleg Viktorovich: "We could have been at the same place where they happen to be...".

26.03.08
Navig. Lyudmila Borisovna, tell us what was the route of the Perm group?
L.B. This group was from the Perm Pedagogical Institute, they went along Vishera to Isherim (mountain in the north of the Perm province, part of the Ural range - ed. note). I was offended and returned home from Serov.
Navig. Did you apply for the route well in advance?
L.B. We are from Perm.
Navig. And the application wasn't processed?
L.B. Yes, they didn't sign it. This is what the leader of the group explained to me. Showed me the telegram.
Navig. And where is this telegram now?
L.B. So many years have passed. But it was written there: Otorten is canceled, come if you want to go to Isherim. I.e. I had to return to Perm and go on Vishera to Isherim. I did not go.
Navig. And in Serov did you meet with Dyatlov group?
L.B. No. They went on. I came to the committee of physical culture and they told me that UPI group came and asked for the where is the Perm group?
Navig. That means Dyatlov group communicated with the Committee of Physical Education?
L.B. Yes. They went there, and even, in my opinion, stamped their route sheet. There was Nikolaev Fyodor Ivanovich.
Navig. We will clarify this in Yudin Y. because in Dyatlov group diaries there is no mentioning that they went to the sports committee in Serov.
Navig. It's strange that they canceled the route in one day. This is compromising the whole expedition?
L.B. Yes. And they quickly changed the route to Isherim.
Navig. Did they say the reason?
L.B. The reason? They said "There is nothing for you to do there"
Navig. I.e. not some weather conditions?
L.B. No, no. When I asked the leader why didn't they come (to Serov - ed. note), he said that they told him that you have nothing to do there, on Otorten.
Navig. Was the category of both routes the same? The difficulty
L.B. No. Isherim was easier. And the group leader has been on both Otorten and Isherim, so it was easy for him to change the route.
Navig. Have you ever led a group?
L.B. No, I have only participated.
Navig. Do you have home in Serov where you were born?
L.B. Yes, that's why I came 2 days earlier, took in the military tents and sleeping bags and waited for my group. And they didn't come. About the category I can not say right now. But there was less distance. And here we had Polunochnoe-Vizhay-Burmantovo.