Submitted to the CENTER by Elder. Transcript TUAPSE 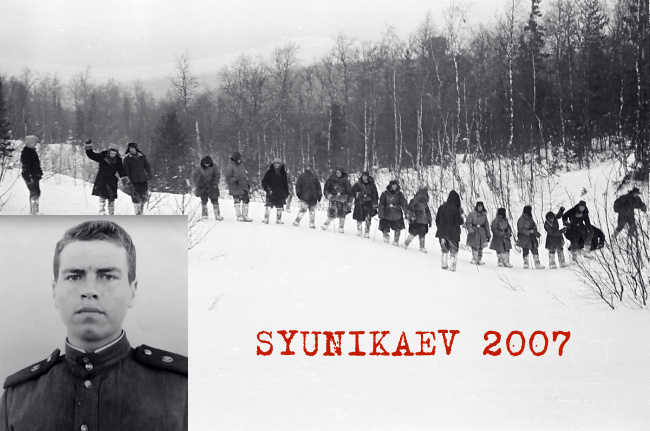 This is written by a veteran of labor and sports, a member of a search group of students in 1959, a former cadet of the divisional team of military unit 6602 Himza Fazylovich Syunikayev. Not today, then tomorrow it will be 48 years since our comrades died.

I remember how all the cadets were alerted to the regiment at night, and after that they chose all the best athletes - skiers, and in the morning they took us to the city of Ivdel to the airport, where mothers and fathers were waiting for us, so that we found their children. They loaded us into an AN-8 helicopter and flew us to the pass. We stayed at the pass on the nameless mountain and Аtаrten (Otorten) for a whole month. At first, we searched with probes all day long.

After 48 years it is still in my ears, I can hear the cannonade of explosions, the fall of rockets. This lasted two or three days. It was studying, and this was an interest of mine. These were fired from the ocean submarines, from the islands in the ocean. We complained to the commander that we would not leave the tents until they stopped firing. So he ordered the radio operator, he was ours, to call the right place to finish the shooting practice in the area.

True, after that the cannonade stopped.

I repeatedly wrote to Moscow, so that the soldiers and students who participated in the search group would be enrolled, as they were in a hot spot, but they always answer me that the issue will be resolved in 2009, I write that until these days we have not live. I have already undergone three operations, replaced - repaired the intestines, then the lymph nodes began to swell, the same was the operation, all my teeth fell out, my hair was gray. In our family, everyone dies with teeth and everyone has black hair. I also have a sister who has been alive since 1929. All her teeth are intact and her hair is gray only in some places. The soldiers from Kazakhstan almost buried everyone, some are dying of cancer - this is Volodya Hlyapov.

I just found one in the city of Mamlyut, Victor Kashmenko. Alive and healthy. He was a watchman in a tent. We were filling up on cranberries, there ate partridges in the mountains. There were so many that we almost caught them with our bear hands when there was wind.

Please tell me how are doing. If you go back to the place where the students died, to the Dyatlov pass, put flowers from the soldiers of the military unit 6602. Respectfully,

Thank you very much for your letter, which I did not answer for a long time, for which I offer my deepest apologies. At that time I was busy preparing for a business trip to South Korea. Then I got sick and had a lot of things to do at work. Excuse me, please.

Let me tell you a little about the "Dyatlov Group Memory Fund", created by us several years ago. We are collecting materials that could shed light on the mysterious circumstances of the death of 9 student tourists. We take care of the monument to the group, annually hold a memorial day, participated in the creation of television films, and much more. Unfortunately, due to the lack of official reliable data, due to the silence of the authorities and the secrecy of the case, many incredible (sometimes ridiculous and false) versions have appeared. Now we are preparing for the 50th anniversary of this sad event on February 2, 1959.

Your letter is very interesting to me, because I took part in the search in March 1959. At that moment we were 10 fifth-year students, we lived in an army tent with the soldiers. From the letter I did not understand the exact time of your stay there. It is possible that we were together for some time. Every day we walked through the pass and searched with probes for the bodies of 4 dead, which were found only in early May, when the snow began to melt actively. Five bodies were found prior to our group. Much later we managed to name the mentioned pass by the name of Dyatlov. Now the DYATLOV PASS can be found on all official maps of this area.

In your letter, you write about cannonade - shooting practice, even with missiles from submarines and islands in the ocean. It is strange that none of the searchers students mentioned this, although from the very beginning at different times there were only about 60 of us. But the radio operator you are writing about recollects the same thing. So that your information is very valuable and useful to us.

On the issue of radiation. There is still debate over whether there was radiation there. Where did the talk come from? The fact is that traces of radiation were found on the clothes of 2 dead students, but they worked at the Physicotechnical Institute and dealt with radioactive materials. As far as I know, all surveys done later provided only local readings, but not at the site of the search. Some experts argue that it could not be the cause of the death of the people. What you describe related to your health and the health of your fellows is terrible. I can only sympathize. Maybe the reason is different? Although you are not the first to raise this topic. Nevertheless, we do not ignore your information and add it to our archive.

The death of my friends (I studied and went hiking with them) altered my whole life. I was at the scene of the death in February 1979 (twentieth anniversary). This was my last winter ski trip. We went along the route planned by Dyatlov, only in the opposite direction. Dyatlov's route has become very popular. Three years ago, young tourists from our UPI Institute also passed it and shot a television film shown on Channel 4.

I wish you to hold on for a long time and not give up, good luck and health to your whole family. Your letter confirms the fact that many people were hurt by the death of the Dyatlov group. Thanks again and sorry for the lengthy answer. 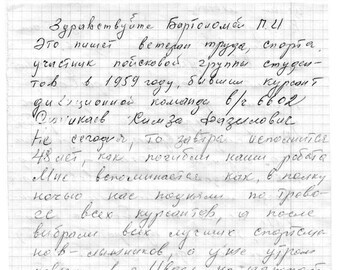 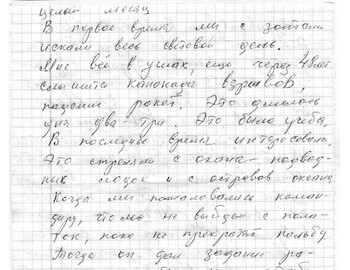 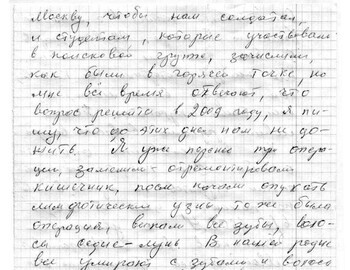 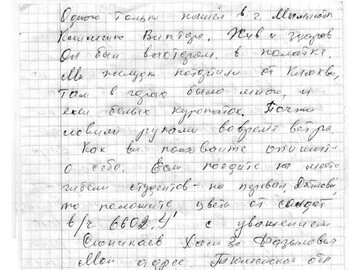 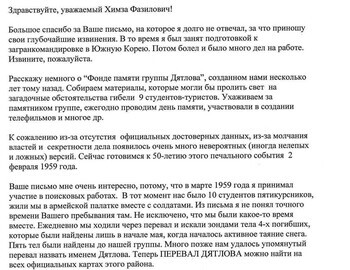